A MOST WANTED MAN

"Siding with the Bad Guys" 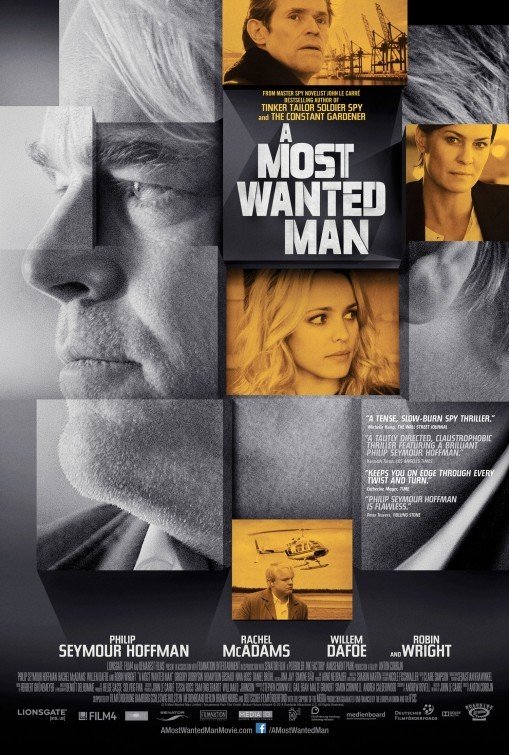 A MOST WANTED MAN is a spy thriller set in Hamburg, Germany. A German counter-terrorism expert named Gunther is trying to manipulate an illegal Muslim immigrant from Chechnya and an idealistic liberal lawyer. Gunther’s bigger target is a popular Muslim charity official who can help uncover a secret group of Muslim terrorists. The terrorists are using a shipping company to funnel part of the charity to finance their terror plots. Gunther has to enlist the support of the local American CIA agent, but can he trust her?

A MOST WANTED MAN has tense moments and excellent acting, especially by the late Phillip Seymour Hoffman as Gunther. However, it’s too slow to be truly compelling. Worse, however, the Muslim characters and the idealistic liberal lawyer become victims of the Americans. So, the movie, which is based on a novel by an acclaimed leftist author, sides with the bad guys. As usual, the Americans are the bad guys, and Muslims are misunderstood victims of the West. A MOST WANTED MAN also includes some “f” words, though it’s free of graphic sex and violence.

(RoRoRo, PCPCPC, FRFRFR, APAP, B, C, LL, V, A, D, MM) Very strong Romantic liberal and leftist worldview where a social and political system corrupts human beings, with very strong politically correct content that sees Muslims as victims of the West (and includes some references to Allah and two separate scenes where two young Muslim men pray to Allah) and ends on a strong Anti-American note that’s left-oriented, plus some references to God and one comment referring to the saving power of Christ but slightly ironic though not Anti-Christian per se; about 19 or 20 obscenities (including 15 or 16 “f” words) and one strong profanity invoking the name of Christ; light violence includes van crashes into cab, people kidnapped off street, and intense chase scenes on foot, but more dramatic than violent, plus man shows scars on his back from Russian torture; no sex, just very light hints of romantic interest, and man seems estranged from his wife and may have feelings for another woman, but they are not really carried out in any way during the story; no nudity; and, betrayal where betrayers get away with what they do at the end, wife shows dislike of husband in one scene, lying, people prove untrustworthy, woman seems naive.

A MOST WANTED MAN is a spy thriller based on a novel by acclaimed novelist John le Carré. Never a patriotic spy novelist (unlike the creator of the James Bond novels), le Carré has turned increasingly Anti-American and Anti-West in his novels. So, this story is a leftist critique of President George W. Bush’s rendition policies, the policy of kidnapping terrorist suspects and sending them to other countries for interrogation, countries that might engage in torture activities that go beyond practices such as enhanced interrogation or waterboarding. In his more recent fiction, Le Carré stacks the deck so that Americans, or in at least one case, Israelis, are the worst characters and Muslims or patriotic communist spies and leftists become innocent victims of the evil Americans or western capitalism. This is pretty much what happens in the novel and the movie version of A MOST WANTED MAN, although the movie’s main American character doesn’t turn out to be really bad until the very end.

The story of A MOST WANTED MAN centers on Gunther, a chain-smoking middle-aged man who runs Germany’s secret anti-terrorist division in Hamburg, the port city where the leader of the 911 hijackers was stationed. Gunther is focused on co-opting Abdullah, the head of a large Muslim charity group, who launders some of his charity monies to a shipping company in league with Muslim terrorists overseas. A young Chechen Muslim named Issa is a key to Gunther’s plot. Issa entered Germany illegally and is trying to become a German citizen. Issa’s mother was raped by a Russian military officer with lots of money in a secret German bank account.

Gunther and his team co-opt a beautiful young attorney named Annabel, who’s helping Issa get legal papers. Issa doesn’t want his father’s money. Instead, he wants to use only a small part of it to get his citizenship papers. So, Gunther and his team convince Annabel to convince Issa to give his money to Abdullah’s charity. Then, Gunther will have leverage on Abdullah to convince Abdullah to help Gunther get the goods on the terrorist leaders behind the shipping company.

Can Gunther convince the heads of the German spy agency and the local chief of the CIA’s bureau in Germany, a woman, to go along with this plan? Even if they do, will Gunther’s plan succeed?

As in many, though not all, of le Carré’s work, the hero here is a master of manipulation. However, A MOST WANTED MAN is another case where the manipulative hero is himself manipulated and even betrayed. Although this makes for thrilling, intricate, compelling storytelling, the tendency to make the western powers, especially the Americans, the bad guys, and the Muslims or leftists the good guys (or at least the innocent guys) continues to be annoying and evil. Le Carré’s more recent stories, thus, have become too much like ham-fisted leftist propaganda rather than well-written novels of intricate intrigue.

The worldview seems highly Romantic, but sometimes borders on misanthropic. Thus, the characters in this le Carré story, as in many others of his, are part of a world where the social and political order has corrupted people, who seem born good. Still, one also gets the sense that le Carré sees people as incapable of being transformed for the better. Thus, le Carré’s world is a world without Jesus. Ironically, the hero here makes an offhand remark about the saving power of Jesus Christ, but it’s clear that he himself doesn’t believe in it, despite the inner sense of decency that his character sometimes displays.

MOVEIGUIDE®, therefore, can’t commend A MOST WANTED MAN. Ultimately, it seems to side with the bad guys, the Muslims who either commit heinous acts of terror or let them occur under their nose. Some of le Carré’s earlier stories, such as THE SPY WHO CAME IN FROM THE COLD, THE HONOURABLE SCHOOLBOY or TINKER TAILOR SOLDIER SPY, seem to be much better, more rewarding examples of this style of fiction and of le Carré’s best work. Clearly, the Richard Burton version of THE SPY WHO CAME IN FROM THE COLD and the TV version of TINKER featuring Alec Guinness remain the two best versions of a le Carré novel. Le Carré means “The Square” in French, by the way.