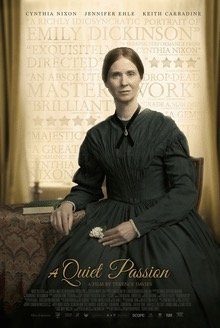 A QUIET PASSION is the story of the famous 19th Century American poet, Emily Dickinson. The movie starts out with Emily as a young girl in New England and goes all the way into her adult life. Viewers go on a journey with Emily, seeing her at every stage in life up until her death at 55.

A QUIET PASSION is a beautiful, compelling appreciation of the talented reclusive poet, but it’s slow due to intricate language and long takes. Thus, it likely will only hold an adult viewer’s attention. That said, it makes great use of Emily’s poetry by dispersing it with voiceovers. This technique may lure an unknown Dickinson fan into her poems by the end. A QUIET PASSION has a strong Christian, moral worldview that references God, the Bible and church sermons as a means to find support and increased faith. Emily finds strength and confidence to continue writing through prayer, even when her work isn’t being published. A QUIET PASSION has a few curse words and two traumatic scenes of sick women. So, caution is advised for younger children.

(CC, BB, L, S, A, MM) Strong Christian, biblical, moral worldview about the poet Emily Dickinson, who prays to God, attributes her faith as her means of strength to continue writing even when others tell her to stop, and refers to God, church and the Bible as sources for hope and salvation, plus teachers ask students repeatedly about their faith and encourage them to choose God so they will be saved, movie implies biblical moral virtues of love, faithfulness and honoring ones parents, Emily chooses to live at home and care for her parents in their old age, Emily loves her family and friends and delights in their good qualities in her poems, Emily is faithful to God’s calling for to write even when those around her advise her to marry instead; three obscenities and two profanities; older woman sweats profusely and collapses from a stroke, woman’s body shakes violently from a kidney failure; married woman commits adultery with another man, and Emily finds the woman kissing her brother on the couch, and man and woman kiss on their wedding day; no nudity; light alcohol usage includes aunt sips a small glass of wine with her family; no smoking or drug use; and, miscellaneous problems include greed, racism, and dysfunctional family portrayals.

A QUIET PASSION is a beautifully produced depiction of the life of 19th Century American poet, Emily Dickinson, from her early days as a young schoolgirl in New England to her older years as an unmarried writer. A QUIET PASSION is compelling, with a strong Christian, moral worldview, but it sometimes feels more like a biographical documentary than a drama and contains a few curse words and a couple disturbing scenes of older women suffering from illnesses. So, MOVIEGUIDE® advises caution for younger children.

The movie opens up with Emily as a young school girl. The teachers ask the students to state their beliefs about God and the church. Emily, though young, boldly announces to her teachers she believes in the Lord but knows He’s calling her to something more than submission to authority. Her teachers scoff at her rebellious nature.

Flash forward years later. The quick-witted redhead is still rebelling against society’s desire to see her married off with a husband. Now a grown woman, Emily still lives at home and spends her free time writing. She writes between 3 a.m. to sunrise every morning, reminding her friends this is her love, and she can’t image a husband, who would allow her to pursue this endeavor. Her best girlfriend and sister, both single as well, encourage her not to be so hostile against the idea of marriage and urge her to give love a shot.

Emily attends a few social gatherings, but finds no interest in dancing with strangers when she could be writing poetry by candlelight. Meanwhile, she fights to get her poems published and ends up getting seven pieces published in the paper. When she sees her work in the paper, she’s thrilled but horrified that her punctuation has been changed. She demands to meet the editor.

The editor visits Emily at her home and explains to her that her use of semi colons and commas is hard for the reader to understand and should be taken out. Emily argues he has no right to do this to her work and sees this as an attack on her poems. She boldly states she would rather have her poems not published than altered. The editor calls her a foolish girl and doesn’t publish her work again.

In need of inspiration, Emily goes to church where she is blown away by a new pastor’s sermon. She invites him and his wife to have tea at her home. Emily and her sister serve the man and his stuffy wife, who finds tea a sinful stimulant. The pastor praises Emily’s work and compliments her gift as a poet. Emily is overjoyed with the inspiring pastor’s delight in her work, and she begins to see him in a new light. She develops her first crush on a man, but stops herself from thinking this way after her sister reminds her she has fallen for him because he loves her work, not her. Emily is reminded that writing is her true love, not men.

Will her poems ever be recognized for their artistic beauty?

A QUIET PASSION is a beautifully produced depiction of Emily Dickinson’s life, with an excellent performance by Cynthia Nixon as Emily. The movie is compelling, but it sometimes feels more like a biographical documentary than a drama.

A QUIET PASSION has a strong Christian, moral worldview that encourages viewers to follow God’s calling for their life. Emily did not see great success with her poems during her lifetime, but she honored the gift of writing that God gave her. As a result, she has influenced many writers and inspired endless of people today. This biography of her life is a true testament that God knows what’s best, even if we don’t see the fruit of our labor. However, it does have a few curse words and a disturbing image of Emily violently shaking from kidney failure. So, caution is advised for small children.

It should be noted that, while some scholars make all sorts of wild speculation about Dickinson’s psychology, personal life and philosophy, many of them forget the strong positive references to Jesus Christ in some of her poems. It’s good to see that this movie seems to honor that part of Emily Dickinson’s life.

Rent or Buy A QUIET PASSION: