ALVIN AND THE CHIPMUNKS THE ROAD CHIP

"Chipmunks Are Back with More Hijinks and Sentiment" 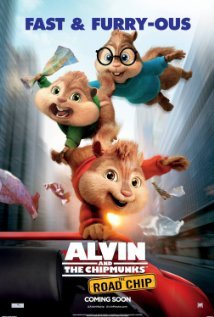 In ALVIN AND THE CHIPMUNKS: THE ROAD CHIP, Dave has a new girlfriend, Shira, and says it’s getting serious. Alvin, Theodore and Simon believe he’s going to propose to Shira and dump them. Dave takes Shira, along with an engagement ring, with him to Miami on a business trip. Back in Los Angeles, Shira’s teenage son, Miles, stays with the Chipmunks and tortures them, giving them more reason to prevent the engagement. The disdain between them and Miles is mutual, so they all set off on a harrowing three-day journey to Miami to stop Dave from proposing to Shira. Will they get there in time?

THE ROAD CHIP is another sequel in the newly resurrected CHIPMUNK tales. Children will no doubt enjoy the hijinks and over-the-top characters. There are even a few moments that will have adults laughing. Parents should be aware that the issue of broken families is addressed. Also, there are some obligatory bathroom jokes that, regrettably, find their way into movies for families with younger children. That said, ROAD CHIP has a strong moral worldview with some redemptive elements.

(BB, C, PC, L, V, N, AA, M) Overall strong moral, light redemptive worldview where characters are held accountable or punished for wrongdoings, characters apologize for doing something bad, and a strong family dynamic, but three politically correct scenes imply people should be non-judgmental about families, who are made up of different combinations and lifestyles outside of the biblical definition; one profane “God” is used, a couple jokes about passing gas, urination scene, joke about animal droppings when a chipmunk hides in a teenage boy’s pants, implied joke about a man’s “nuts”; there is a bar fight where several people are punched in the face and thrown around, a man gets hit in his private area; no sex; natural upper male nudity when a man takes off his shirt to look at a tattoo; drinking is shown at a party in New Orleans, and there is implied drunkenness, but none is overtly shown; no smoking or drugs; and, chipmunks and children continuously disobey their parents but get caught, an attempt to ruin a proposal and steal a ring, several scenes involve lying though some lies are found out, and a teenage boy bullies the chipmunks in several scenes.

In ALVIN AND THE CHIPMUNKS: THE ROAD CHIP, Alvin, Theodore and Simon travel to Miami to stop Dave from proposing to his new girlfriend. Children will certainly enjoy the hijinks in ROAD CHIP, but there is some content that might be questionable for children.

As the movie opens, Alvin, Theodore, and Simon can never seem to stay out of trouble. Their work-weary guardian, Dave, returns home on the night of his birthday to find his house filled with hundreds of partygoers and everything a mess. He promptly shuts things down but is reluctant to ground the Chipmunks, because he has to leave town for a few days on a business trip to Miami. Instead of grounding them again, Dave ops to take the Chipmunks on a miniature golf session, to introduce them to his new girlfriend, Shira. Unfortunately, they’re also introduced to Shira’s teenage son, Miles, who proceeds to torture the Chipmunks behind their Dave and Shira’s backs.

Although Dave tells the chipmunks that things between him and Shira are getting serious, the chipmunks don’t take him at his word until they discover an engagement ring in one of Dave’s bags. With all the recent changes in Dave’s life and their constant troublemaking, the Chipmunks believe that, if Dave gets married, he’ll dump them and move on with his new family. Even if he doesn’t, however, they’d be forced to share a house with the sinister Miles. Either way, they decide they must stop the engagement from happening.

Things get more complicated when Dave tells the chipmunks he’s taking Shira with him to Miami, which is a perfect opportunity for him to propose. The disdain between Miles and the chipmunks is mutual, so when Miles comes to stay with them while their parents are gone, they hatch a plan to travel to Miami and prevent the engagement. A harrowing journey ensues on planes, buses and cars. Not only do the Chipmunks have to worry about getting to Miami on time, they also have to elude capture by a U.S. Air Marshall who’s put them on the no-fly list. However, when they get to Miami, they realize that their mission might be a huge mistake.

THE ROAD CHIP is another sequel in a series of newly resurrected CHIPMUNK tales. Children will no doubt enjoy the hijinks and over-the-top characters. There are even a few moments that will have adults laughing. Much of the humor and plot is fairly clichéd, however, which may dampen their effectiveness with older audiences and even go over the heads of young children. Some bits of dialogue also come across as overly sentimental. The one major jarring part of the movie (for adults anyway), is the legal adoption of the chipmunks by Dave as they all sit in a government courthouse and sign papers issued by a local official. Yeah, it’s only a movie, but that’s a little too outside the bounds of even the fictional reality of Hollywood.

ROAD CHIP has a strong moral worldview. Characters are held accountable and punished for any wrongdoing. The perpetrators apologize, and the movie has a strong pro-family dynamic. However, there are tinges of political correctness that make their way into several scenes. These revolve around the myriad of combinations and lifestyles that could make up a modern family. The issue of broken families is also addressed, as Miles recounts the story of his father abandoning him when he was only five. Only one profanity is used, however, although there are several obligatory bathroom jokes that usually, regrettably, find their way into some movies for families with young children. So, caution is advised.

Watch ALVIN AND THE CHIPMUNKS THE ROAD CHIP:

WHY THE NATIVITY? Answers 25 Questions About the Birth of Christ

Johnny Cash’s Sister Shares Her Brother’s Faith: ‘He Gave His Heart To The Lord’