"Crime and Corruption Do Not Pay" 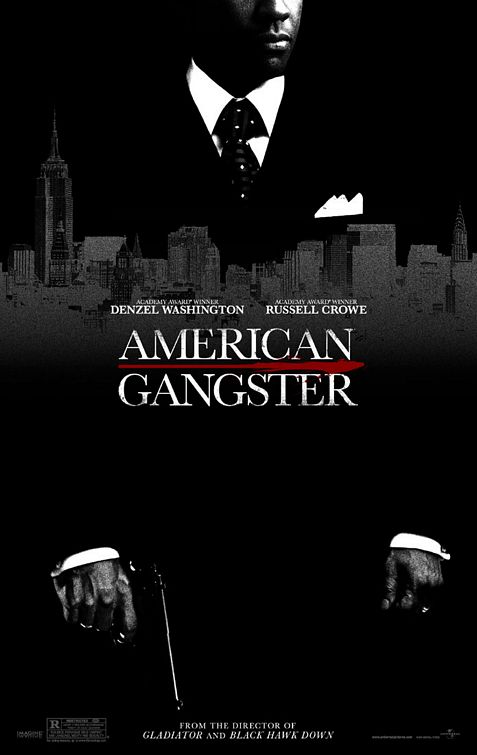 AMERICAN GANGSTER tells a story about two men: a ruthless African American drug lord and the incorruptible narcotics cop who wants to put him behind bars. It opens in 1968 in New York City. Frank Lucas, played by Denzel Washington, sets up an operation in Harlem selling a more pure, cheaper form of heroin than the Italian Mafia. Meanwhile, Richie Roberts, an incorruptible Newark, New Jersey detective played by Russell Crowe, is going to law school at night and working during the day. When President Nixon announces his anti-drug policies, Richie is recognized for his integrity and charged with running Newark’s new special narcotics team. Richie eventually targets Frank, who has become so big that the Mafia works for him instead of the other way around.

MOVIEGUIDE® advises strong extreme caution for AMERICAN GANGSTER due to lots of strong foul language, some graphic violence, explicit nudity, and a depicted sex scene. The movie mostly sides, however, with the honest narcotics detective played by Russell Crowe, so it has a strong moral worldview throughout. There is also some strong, positive Christian content at the end that lifts the movie above other similar thrillers.

(BB, CC, LLL, VVV, SS, NN, A, DD, MM) Strong moral worldview with strong overt Christian elements about a ruthless drug lord and the incorruptible policeman seeking to put him behind bars; at least 98 mostly strong obscenities and six strong profanities (all GDs); sometimes very strong somewhat graphic violence with some blood and other violence includes man in chair set on fire and then shot at least twice, other pointblank shootings and murders, a couple gunfights, man beats brother for making mistake, pools of blood form under two or more victims, and threats of violence; one scene of depicted fornication, it is suggested that a policeman is somewhat of a playboy, some suggestive dancing, and implied prostitution; many quick shots of upper and rear female nudity in places where women help make heroin but are forced to work naked to make sure they don’t steal anything, and implied total female nudity; alcohol use; smoking, heroin junkies shown shooting up several times and gangsters sell heroin but all this is mostly rebuked; and, graft, corruption, attempted bribery, and gangsters are rebuked, and honest policeman is rebuked for his promiscuous lifestyle and told you can go to Hell for that too but he acknowledges the rebuke and rest of movie hints he may have taken the criticism to heart and changed his ways.

AMERICAN GANGSTER stars Denzel Washington and Russell Crowe in a thriller that tells a story about two men: a ruthless African American drug lord and the incorruptible narcotics cop who wants to put him behind bars.

The movie opens in 1968 in New York City. An elderly black gangster in Harlem suddenly dies. His long-time driver and protégé, Frank Lucas (played by Denzel Washington), hears on the news that one-third of American soldiers in Vietnam are using hard drugs. Frank contacts his ex-wife’s cousin, a soldier who runs a bar in Bangkok, Thailand. After borrowing hundreds of thousands of dollars, he goes to Thailand. There, he and his in-law travel into the jungle to meet with the top heroin grower in Southeast Asia. Soon, Frank is running a high quality heroin operation in Harlem. His packets of heroin, which he calls Blue Magic, are more pure and cheaper than the competition, the Italian Mafia.

While Frank is setting up his operation, Richie Roberts (played by Russell Crowe), a Newark, New Jersey detective, is going to law school at night and working during the day. One day, he and his partner stumble upon nearly $1 million in illegal drug money. Richie convinces his partner to turn the money in, but their integrity gets them ostracized by the other policemen who don’t mind taking a little graft every now and then.

When President Nixon announces his new anti-drug policies, Richie is finally recognized for his integrity and charged with running Newark’s new special narcotics team. The team will be linked to the feds and will only track the big shipments.

It doesn’t take long for Richie to discover that Frank is an important heroin supplier, but then he is surprised to learn that Frank has become so big that the Italian Mafia works for him instead of the other way around. It will take everything for Richie to find a way to put Frank behind bars and clean up New Jersey and New York.

AMERICAN GANGSTER is a captivating look at one of the biggest drug and corruption busts in history, especially in the second half when the story takes some entertaining, unexpected twists and turns. Of course, Denzel Washington and Russell Crowe are equally mesmerizing in their respective performances, though Denzel may deliver the slightly better performance.

The good news is that both men like to do movies with strong moral worldviews, and they even like to put positive Christian content in their movies. AMERICAN GANGSTER is no exception, even though it is rated R for very strong foul language, some graphic violence, shots of explicit nudity, and a strong sex scene. Though the movie’s moral worldview is clear throughout in that it sides with the honest narcotics detective not the gangster or the corrupt New York police detectives, the strongest Christian content doesn’t come until the end when Richie is close to busting Frank’s whole operation. In one scene, the song “Amazing Grace” reminds Frank that even a wretch like him can be saved. The filmmakers apparently decided, however, that a conversion scene after this might be a bit too hokey or something.

Thus, MOVIEGUIDE® gives a strong extreme caution to AMERICAN GANGSTER. This is a gritty urban story that would never be appropriate for any but the most mature older teenagers. Even so, the movie’s edgier elements should still have been toned down to make it less problematic. Doing so would have strengthened the movie’s positive, somewhat inspirational ending.