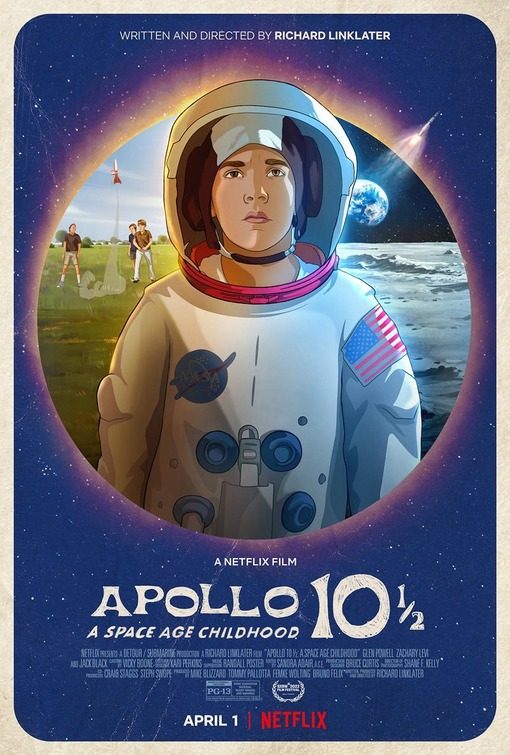 APOLLO 10½: A SPACE AGE CHILDHOOD is an imaginative, animated homage on Netflix to the space race and 1969 America. It’s told from the perspective of a 10-year-old boy, Stan, who lives near the NASA in Houston, Texas. An older Stan narrates most of the story, sharing memories from his childhood. The coming of age tale intertwines stories from Stan’s childhood with scenes from the historic Apollo 11 moon landing. The story celebrates man on the moon while also offering social commentary on America at the time.

APOLLO 10½ uses a unique animation style that provides a fresh, captivating take on the 1969 moon landing. Although Stan has intergalactic aspirations, the movie takes time to flesh out the world in which he lives, with nods to American pop-culture, the political turmoil of the time, technological advances like color TV, and new music and movies. APOLLO 10½ has a moral worldview stressing family and friendship, with overt patriotic elements. However, it has some strong violence, brief foul language, off-color content, and an occult reference. So, MOVIEGUIDE® advises caution for older children and young teenagers.

(B, Pa, O, PP, LL, VV, S, N, A, D, M):
Dominant Worldview and Other Worldview Content/Elements:
Moral worldview stresses family and friendship, while there is social commentary, the movie presents different ideas without taking a side one way or the other and some pagan, occult worldview elements like a group of girls use a Ouija board to discover school crushes, but there are also some overt patriotic elements and themes where the moon landing is seen as a major triumph in American history
Foul Language:
Nine obscenities, two light profanities and boy vomits during his astronaut training
Violence:
Some strong and light violence such as some gory depictions of playground accidents, a child breaks his arm during a game of red rover red rover, some depictions of soldiers and the war in Vietnam (while some blood is shown, these depictions are not too intense), references to two political assassinations
Sex:
No sex, a couple make out at a drive-in movie theater, a collection of Playboy magazines are confiscated, and boy says he likes a music album because the cover shows a woman with whipped cream on her body, but none of the sexual content is explicit and is mostly just discussed
Nudity:
Upper male nudity in swimming situations, plus woman wears a tiny bikini in a movie poster
Alcohol Use:
Some brief scenes with alcohol use
Smoking and/or Drug Use and Abuse:
Smoking cigarettes, a staple from the 1960s, is found throughout the movie; and,
Miscellaneous Immorality:
A reference to a rock song being about LSD, children play pranks, a reference to contraception.

APOLLO 10½: A SPACE AGE CHILDHOOD is an imaginative animated movie streaming on Netflix that explores America in 1969, and the year’s culmination of landing a man on the moon, told from the perspective of a 10-year-old boy in Houston. APOLLO 10½ has stunning animation which brings the story to life and stresses family and friendship, but it has some strong violence, brief foul language, light off-color content, and an occult reference that warrants caution for older children.

The story is told through the memories and reflections of an older Stan. Stan recounts his time as a fourth grade boy, living in the suburbs of El Lago, Texas, just miles from NASA and Mission Control in Houston.

One day, while at recess, two suited men approach Stan and pull him aside. The two men work for NASA, and in a calculating error, built the lunar lander too small.

The two men ask if Stan would be willing to serve his country and be the first human to land on the moon in a top secret mission titled, APOLLO 10½. The men provide Stan with an alibi for his time away and tell him that training will begin in the summer of 1969.

Interwoven with NASA’s efforts to beat the world to the moon are explorations of Stan’s experiences from that era. From the popular culture, to his life in suburbia, to the adults’ reactions to the rapid technological changes, everything points to the space race. Stan, who lives with five older siblings, recalls weekends with his family, the switch to color TV, road trips in the back of a pickup truck to the beach, and time spent at the local bowling alley and arcade.

Stan’s perspective is that every one of his friends’ parents works for NASA in some way, shape or form. Everything from amusement parks to baseball stadiums remind Americans of the race to space and the potential to make history.

The finale flips between the live broadcast of the Apollo 11 mission to the moon and Stan’s experience of being the first person to step foot on the moon. By the end of the movie, it’s unclear if Apollo 10½ is real or just the intergalactic dream of a 10-year-old boy. However, the movie stresses the influence of the moon landing on American culture and children at the time as they grow up into an exciting new world of exploration and possibility.

APOLLO 10½ is an imaginative homage to the space race and 1969 America. It APOLLO 10½ uses a unique animation style that provides a fresh and captivating take on the 1969 moon landing. Although Stan has intergalactic aspirations, the movie takes time to flesh out the world that he lives in, with nods to American pop culture, the political turmoil of the time, technological advances like color TV, and new music and movies. Due to some strong violence, brief foul language, light off-color content, and an occult reference, MOVIEGUIDE® advises caution for older children and young teenagers.