"The Wish Heard Round the World" 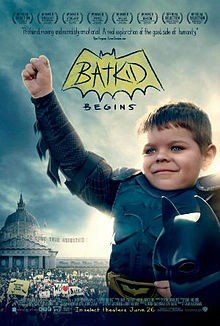 BATKID BEGINS is a documentary about a little boy diagnosed with leukemia. At 5-years-old, Miles Scott is granted a wish from the Make-a-Wish Foundation. When Miles wishes to be his favorite superhero, Batman, the directors of Make-a-Wish work hard to make it a reality. His special wish made its way to the executive director of the Make-a-Wish Foundation, Patricia Wilson. Patricia realized Miles’ wish was very special. She wasted no time beginning the prepa-rations. So, the Foundation transformed parts of downtown San Francisco into Gotham City, ac-quired several Batmobiles, and even rounded up people to play several of the famous villains from Batman. BATKID BEGINS is a delightful, entertaining documentary about a community coming together to help make a little boy’s wish come true. The movie has a strong moral worldview with strong themes of generosity and helping others. Although documentary style, the movie is very enter-taining and is extremely well made. BATKID BEGINS is a wonderful movie for the whole fam-ily. It’s never boring or dull. BATKID BEGINS will leave smiles on many faces and joy in many hearts.

(BBB, C, PP) Very strong moral worldview with light redemptive elements, includ-ing community comes together to help a sick child, people volunteer their time for others, strong themes of family coming together, strong themes of generosity, some patriotic elements, and themes of superheroes saving people from evil; no foul language; no violence; no sexual content; no nudity; no alcohol; no smoking; and, nothing else objectionable.

BATKID BEGINS tells the story of young boy who was diagnosed with leukemia as a toddler. This documentary gives viewers a glimpse behind the scenes of this spectacular event that not only changed the life of a young boy, but of an entire community. At 5-years-old Miles Scott was granted a wish from the Make-a-Wish foundation. After watching THE NEW ADVENTURES OF BATMAN, the 1977 animated series, with his dad, Miles fell in love with Batman. When the people from Make-a-Wish came to ask him what his wish was, Miles only had one request. He wanted to be Batman. This special wish made its way to the executive director of the Make-a-Wish foundation, Patricia Wilson. Patricia knew Miles’ wish was special and wasted no time beginning the preparations. Instead of going the simple route with the wish and giving Miles a batman costume and letting him run around in a park somewhere, the foundation decided to make this wish something Miles and his family would never forget. Make-a-Wish transformed parts of downtown San Francisco into Gotham City, acquired several Batmobiles, and even rounded up people to play several of the famous villains from Batman. The people at Make-a-Wish knew this would be something that the Scott family would never forget. What they didn’t expect was the impact this wish would have on the community around it. When word of the Batkid wish got out, it became a viral sensation almost overnight. By the time the day came for Miles to actually become Batkid, Make-a-Wish had more than 20,000 people signed up to help with the event and support Miles along the way. BATKID BEGINS is a documentary that’s both entertaining and family friendly. The audience can’t help but smile as they watch Miles transform into a superhero before their eyes. The movie shows what can happen in a community when they step outside of themselves and give generously to help others. BATKID BEGINS has a strong moral worldview with the community helping each other and supporting one another. The movie shows what can happen when a community comes together for a good cause. It also shows a somewhat patriotic worldview as Miles goes around saving people from the pretend villains in Gotham City/San Francisco. BATKID BEGINS is all around very entertaining, with excellent quality. It’s never boring or dull. BATKID BEGINS will leave smiles on many faces and joy in many hearts.