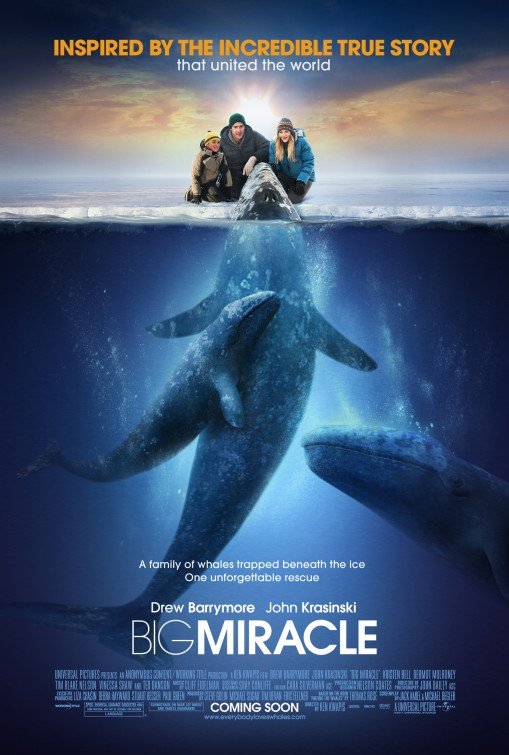 Set in October 1988, BIG MIRACLE opens on Adam, a young TV reporter in Alaska working in Barrow on the northern tip of the state. Adam discovers three whales trapped outside of town by the advancing winter ice. Adam’s ex girlfriend, Rachel, an environmental activist, is upset Adam didn’t call her about his discovery. Adam reminds Rachel she told him not to call her. With help from a local oil company and the National Guard, the state tries to helicopter a big ice-cutting barge to Barrow to free the whales. When the barge breaks down, time begins to run out for the whales. It’s up to the Eskimos, a Russian icebreaker, and some ice rink entrepreneurs from Minnesota to save the day.

Inspired by a true story, BIG MIRACLE shows Americans of different backgrounds working together to solve a problem. Even the environmental activist and the oil company executive start to get along, despite their disagreements. The filmmakers deftly keep the focus on saving the whales and solving the problems that arise. That said, BIG MIRACLE has some foul language and some politically correct moments. Thus, caution is advised.

(BB, PPP, Cap, C, PC, E, LL, V) Strong moral worldview with very strong Pro-American, patriotic content and some capitalist elements and redemptive elements, including apparent prayers to God in Eskimo language, including one where the Eskimo ends by saying “Amen,” marred by a tilt toward politically correct environmentalism over the end credits that includes an instant where an oilman is made to look bad although in the main movie he and the environmentalist activist worked together and came to an understanding not to hate one another, even though they still remained on opposite sides of the fence regarding drilling for oil in Alaska and the Arctic (otherwise, the movie tries to walk down the middle to please both liberals and conservatives); 14 obscenities (about nine “h” words and five “d” words) and nine light profanities such as My God, God, and for God’s sake, plus one man says the letters SOB but not the word; light violence includes ice breaker ship smashes into thick wall of ice, whales in danger of dying, and a scene shows Eskimos hunting a whale but the movie cuts away just as the Eskimo aims his harpoon; no sex but a couple kisses; no nudity; no alcohol; no smoking; and, nothing else objectionable.

Based on a true story, BIG MIRACLE is a whale of a tail, so to speak. As such, it’s a very entertaining movie about saving three stranded whales that tries to appeal to both liberals and conservatives. Over the end credits, however, it succumbs to a little bit of politically correct environmentalism against drilling for oil in Alaska. It does plenty of mostly light foul language, so caution is advised, especially for younger children.

Set in October 1988, the movie’s opening focuses on Adam Carlson, a young TV reporter from Anchorage, Alaska. Adam’s been far north in Barrow, Alaska above the Arctic Circle for several weeks reporting on the local happenings.

Adam longs to be a TV reporter in “the lower 48,” the name Americans use for Mainland USA. He sees his chance when he finds three whales trapped in the approaching winter ice just outside of town. He gets his chance when his report goes national on NBC News.

His ex-girlfriend Rachel, a Greenpeace environmental activist, is upset Adam didn’t call her about his discovery. Adam reminds Rachel that she told him not to call her.

Rachel finds out that the oil company getting approval for a new pipeline has a huge floating barge that could break through the ice and help the whales get to the open ocean before the Arctic freezes up completely. Mr. McGraw, the oil company leader, sees an opportunity to get some good press. So, he and Rachel force the governor’s hand to use the National Guard to send some big helicopters to take the barge the couple hundred miles to Barrow.

When the barge breaks down, however, time begins to run out for the whales. It’s up to the town’s Eskimos, a Russian icebreaker, and a couple of ice rink entrepreneurs from Minnesota to save the day.

Like many great American movies of the Golden Age, such as IT HAPPENED ONE NIGHT, BIG MIRACLE shows Americans of different backgrounds coming together in some way or solving a problem together. Despite having a lot of characters, the filmmakers of BIG MIRACLE deftly keep the movie’s focus on saving the whales and solving the problems that arise.

At one point, the environmental activist and the oilman share a moment of appreciation for one another’s efforts in saving the whales. They admit it’s now hard for them to hate the other person any more, though they still disagree about the issue of oil drilling. At another point, the activist expresses anger and distrust over the hunting whale tradition of the local Eskimos, but she’s clearly harsher than she should be, and the Eskimos defy her liberal expectations. Finally, at a crucial moment, the leading Eskimo elder prays for the whales in his native language. Though not translated, at the end of one prayer, he says, “Amen.”

That said, a few comments mention that some people are complaining about the Reagan administration’s environmental record and support for oil companies. The worst offense comes, however, in a short epilogue during the end credits that refers to the 1989 oil spill of the Exxon Valdez. Thus, the end credits clearly tilt the movie toward the radical anti-oil policies of the modern environmental movement. This moment contradicts the movie’s climactic scenes in the third act, which are filmed in a way to satisfy both liberals and conservatives.