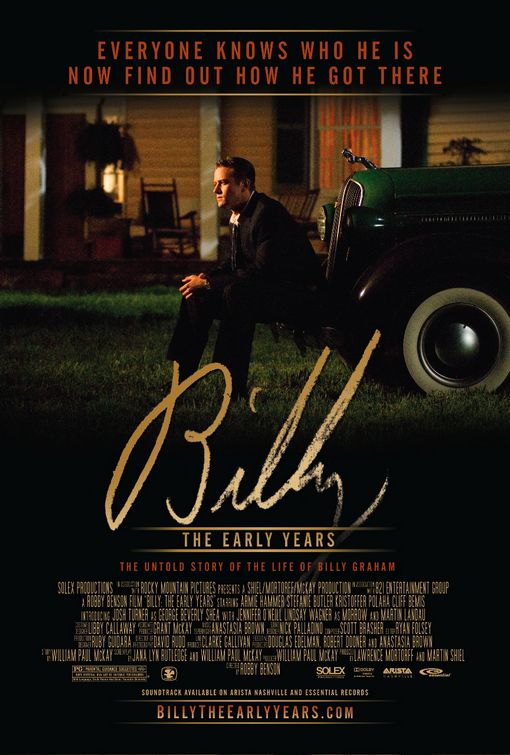 BILLY: THE EARLY YEARS is the story of Billy Graham’s conversion and call to the ministry, Bible college experience, and early career. The movie tells the story of Billy Graham from the point of view of his nemesis, Charles Templeton, a self-centered, one time evangelist and friend of Billy’s who eventually rejected Christ and tried to convince Billy to do the same. The movie follows Billy Graham’s conversion, his struggles at college and his early preaching career after the Holy Spirit anointed him with the power of effective teaching and preaching.

There is a lot of good in BILLY: THE EARLY YEARS. Martin Landau is excellent as Billy’s mentor and eventual nemesis. As Billy, Armie Hammer is good at the drama and good at the comedy. That said, the beginning lacks jeopardy, and the comedy detracts from the drama. A little editing would help a lot. For those who know the story of Billy Graham, this is an interesting tale. For those who do not, it is still a good biography. The good news is that people will hear the Good News of Jesus Christ if they see BILLY: THE EARLY YEARS.

(CCC, BBB, L, V, S, N, A, M) Very strong Christian, biblical worldview with God speaking to Billy Graham, answered prayer, and a vicious attack by an evangelist who has lost his faith and denied Jesus Christ; one “Oh my God” profanity; one pratfall; one brief scene of debauchery showing the life of Charles Templeton before Christ and kissing; upper male nudity; alcohol use; no smoking; and, some strong, clear and complete presentations of the Gospel as well as some weak, existential leap of faith statements.

BILLY: THE EARLY YEARS is the story of Billy Graham’s conversion and call to the ministry, Bible college experience and early career. The movie tells the story of Billy Graham from the point of view of his nemesis, Charles Templeton, a self-centered, one time evangelist and friend of Billy’s who eventually rejected Christ and tried to get Billy to do the same. While Charles lays dying in the hospital, a reporter for a TV station is trying to interview him about Billy Graham, but Charles wants to talk about himself.

Billy’s story here begins in 1934 in North Carolina. Charles is upset that Billy has had a fairy tale life, including his middle class upbringing on his father’s dairy farm. At the beginning of the movie, Billy’s father and his friends are praying around a tree stump for revival in the nation. Billy wants nothing to do with prayer, church or God.

A black friend of Billy’s takes him to a revival meeting. Billy only goes to make fun of the evangelist. When they get there, the preacher speaks directly to Billy and his sinful nature, and Billy goes forward and commits his life to Christ.

Charles interjects his more spectacular salvation experience. His life was involved with wine, women and song, when he was converted he become a powerful evangelist. The TV reporter soon tires of Charles’ boasting and gets him back to talking about Billy.

After graduating, Billy pastors a little church and joins Charles Templeton in his evangelism crusades. At first, Billy is a lousy preacher and sometimes a comical character, so the elders of the church pray for him and he gets the anointing! Templeton is jealous because he is the better preacher. After the anointing prayer, however, Billy develops a powerful preaching style and a strict ethical code.

Charles, while meditating on the horrors of the Holocaust, comes to the conclusion that there is no God because he could not answer the question, “What kind of God could permit the Holocaust?” When he meets up with Billy again, he tells him to give up the faith. Billy goes into the woods to meditate at a tree stump and asks God to reveal himself to him, which God does.

Sadly, the great clash between faith and doubt comes to a less than satisfying conclusion. Faith wins, but not with the application of a strong logical case. Faith appears to require ignoring the tough questions rather than confront them.

There is a lot of good in BILLY: THE EARLY YEARS. Martin Landau gives a magnificent performance as Charles Templeton. Armie Hammer plays a convincing Billy and is good at the drama and good at the comedy.

That said, the comedy is off-putting because it detracts from the dramatic moments. Also off-putting, although historically accurate, is Billy’s infatuation with several women. BILLY: THE EARLY YEARS shows him to be easily smitten by attractive women. Three times in the movie, he experiences “love at first sight.” More than once he is reduced to doing Jerry Lewis slapstick comedy routines because of his infatuations. His college career is presented as a time when Billy studied women more than books.

It is understandable, however, why the filmmakers did this, because every hero must have a shadow or some human characteristics that the audience can relate to. If the hero is too perfect, the audience will not care about him.

Much of the beginning lacks the necessary elements to maintain interest, as it has no jeopardy or danger, just pure biography. What drives interest in movies is jeopardy or danger. Jeopardy is something that the hero will die for and the villain will kill for, and danger is the immediate threat of something horrible happening. There are moments in the beginning lacking either one of those elements, but by the middle both are present, especially when Billy’s faith is challenged.

The very clear presentation of the need for Jesus Christ and the sinfulness of man are diminished slightly by the response to Charles Templeton’s challenge. The response indicates that Billy concluded that Christianity is just a leap of faith, when in fact the Christian faith is a logical, compelling understanding of the reality of man and his relationship with God, as the real Billy Graham preaches so clearly.

At one point, Billy preaches that, “Jesus spent three years in earthly ministry and changed history.” The reason He was able to do so is that He still lives. By His Spirit He has lived in millions of people who’ve changed the world. The New York Times recently wrote about life in China improving because growing Christian belief has led to reduced corruption, better business ethics and better work attitudes. Christianity makes capitalism humane rather than just survival of the fittest. It’s when faith is lost and people see no need to obey God that people descend to the evils of the Holocaust.

For all its flaws, BILLY: THE EARLY YEARS is worth seeing. The Gospel is clearly preached, and God is honored. That cannot be said for very many movies, including some very popular ones. If we want to see more Christian movies made, we need to support those that are made.

There is a lot to like in this movie, but it could have been better. A little judicious editing would help a lot. For those who know the story of Billy Graham, this is an interesting tale. For those who do not, it is still a good biography. The good news is that people will hear the Good News of Jesus Christ if they see BILLY: THE EARLY YEARS.