"Captivating Revelation of the Killing Fields of Communist Socialism" 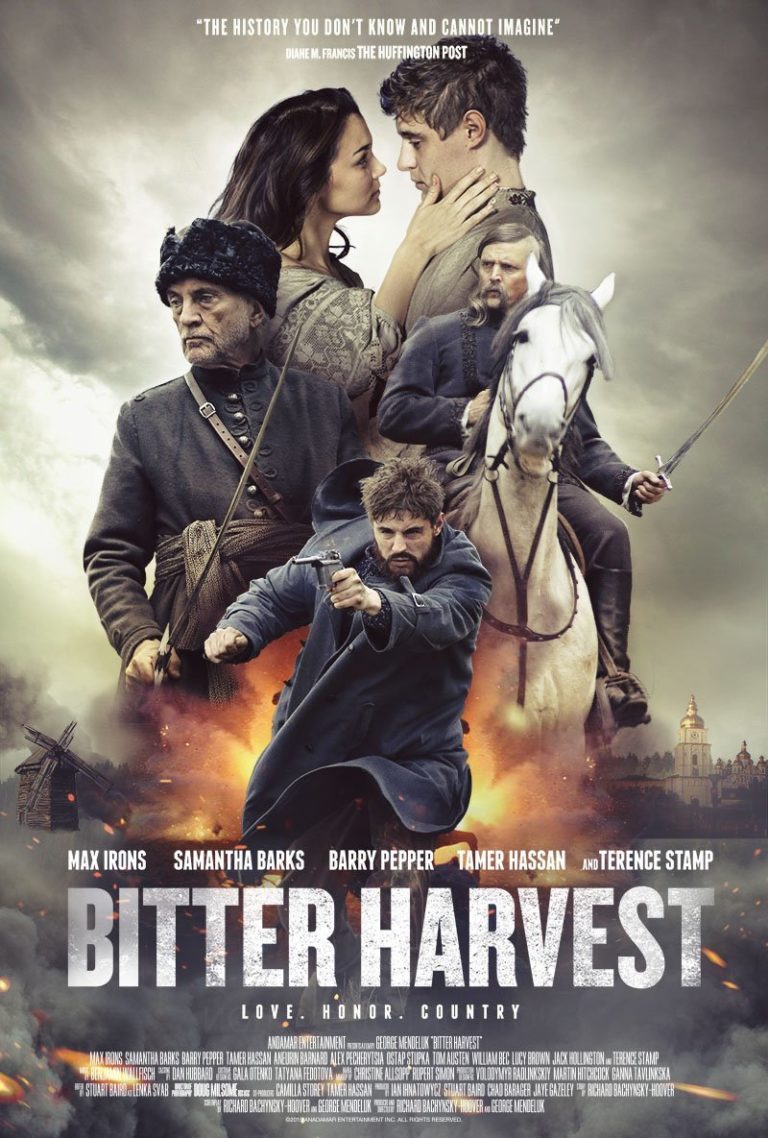 BITTER HARVEST is a must-see, powerful historical drama about the horrible devastation of Ukraine by the Soviet communist atheists in 1932-33. Joseph Stalin, the communist leader, decides Russia needs to confiscate all the food in the Ukraine and enforce socialist collectivization against the farmers in Ukraine. Stalin literally closes the Ukrainian borders and treats the whole country as one huge concentration camp. Yuri, a young man in a small farming village, and the woman he wants to marry try to survive this horrible oppression and escape to Canada.

BITTER HARVEST is very well-plotted, with terrific acting. It exposes all the imaginable evils of collectivism, socialism and communism in the Soviet Union and other places. The love story and other aspects of the movie just highlight the cruelty of Stalin’s communist, socialist dictatorship. BITTER HARVEST contains lots of war violence and cruelty, but it’s never over the top. Because of their circumstances, the couple consummates their marriage before the ceremony. That said, BITTER HARVEST is a Christian movie throughout, featuring lots of comments about God and Jesus, churches, communion, and people being martyred for their faith.

(CCC, BBB, ACACAC, PP, Pa, VV, S, NN, A, DD, MM) Very strong Orthodox Christian, anti-communist worldview featuring lots of comments about God and Jesus, icons, churches, communion, and priests and other people being killed for their faith in Jesus Christ, with a strong endorsement of freedom, property ownership and self-determination, plus some very mild superstitious pagan rituals such as throwing flowers on a lake to see if you’re going to get married; no foul language; lots of violence appropriate to the subject matter including point blank executions, knifings, swordfights, Gatling guns killing people, starvation, cruelty, torture, bombs, burning buildings with people inside, people hung in prisons, people hung by their wrists to be tortured in prison, but no more than other action war movies such as SCHINDLER’S LIST, so no porno-violence; a couple decides to get married after many years of friendship and consummate the marriage before the ceremony with the camera cutting away; very brief, obscured shot of upper male and female shoulder nudity; alcohol use; woman cooks psychedelic mushroom for communist commander which almost drives him crazy, but he recovers; and, communist oppression, but the horrors of communism, collectivism, socialism, and atheism are exposed and revealed.

BITTER HARVEST is a must-see, dramatic, powerful story about the horrible devastation of Ukraine by the Soviet communist atheists in 1932-33, known as Holodomor and officially condemned by the United Nations and confessed by the Russian government.

The movie starts in the breadbasket of Europe, the Ukraine, in the last years of the Tsar, with the Ukrainian peasant farmers praying for and seeking their freedom. Yuri is a little boy, the son of one of the leaders in his tiny village, and the grandson of a mighty warrior. He falls in love as a little boy with a girl in the village, named Natalka. Life in the Ukraine is beautiful and festive.

Years later, in 1930, Stalin has decided Russia needs to confiscate all the food in the Ukraine: first, to sustain the Soviet communist experiment; second, to enforce collectivization; and third, to punish the little farmers in the Ukraine for being successful in their farming. Stalin literally closes the Ukrainian borders, then treats the whole country as one huge concentration camp.

The communists ride into Yuri’s village and demand the farmers join the collective. They also start to strip all the icons and anything of value from the churches and the homes. These faithful Christians hide the icons. The priest s beaten, people are shot and the citizens are told they must collectivize or be killed.

Yuri is anxious to marry Natalka. When his friends leave the village for Kiev, he stays behind to win her hand in marriage. She feels she’ll be a burden for him because she comes from unmarried parents. When the Soviets almost kill her mother, she stays to take care of her mother.

Yuri finally escapes to Kiev promising to return. They write to each other constantly. The Soviets confiscate all the grain and food, leaving the people to starve to death in the homes, the fields and the streets of Kiev. Seven to ten million actually people starved.

Meanwhile, Yuri gets accepted to study art to further the Soviet cause. However, when his teacher is sent to Siberia, he quits and works in a factory. His friend, Nicholas, becomes head of the Ukrainian communist party, but Stalin doesn’t want an independent communist party, and the Soviets close it down. Nicholas commits suicide, writing to Yuri that Yuri was right about communism, and Nicholas himself was wrong.

While Yuri and his friends drink toasts to Nicholas, the Russian soldiers mock him and there’s a brawl where Yuri kills a Russian soldier. Yuri’s sent to a miserable prison and almost killed, except the prison commandant notices his art and wants him to paint his portrait. Yuri uses the sessions to disarm the commandant’s suspicions. He eventually kills him, escaping into the blizzard.

Now, there’s a race against time for Yuri to get to his village, rescue Natalka and escape to America, while the village commandant is killing the priest and trying to rape Natalka. Will they escape to Canada?

BITTER HARVEST is a very well-plotted movie with terrific acting. Several of the actors, such as Terence Stamp, are English, but they’re almost unrecognizable as Ukrainians. The movie exposes all the imaginable evils of collectivism, socialism and communism and reveals the horrible past and perhaps future of communism. Even today, countries like Venezuela are facing the evils that confronted Ukraine in the 1930s.

One person who saw the movie said, “Suddenly, now I understand the history of Communism.” For that reason alone, BITTER HARVEST is a must-see story. The love story and other aspects just highlight the cruelty of the communist, socialist dictatorship.

There’s a very brief implied sex scene with the couple, but there is no foul language, and there’s action violence and wartime violence typical of 1960s war movies. None of it is over the top, however. There’s also one extremely well-crafted scene where the commandment eats a hallucinogenic mushroom.

Despite these elements, BITTER HARVEST is a Christian movie throughout, from the icons to the communion to the preaching to the standing for faith knowing you’re going to be killed to telling the commandant that as an atheist he doesn’t know how to love and he’s going to Hell. In fact, the whole movie affirms Christianity from an Eastern Orthodox perspective.

BITTER HARVEST is highly recommended. If you see it in your neighborhood, take your friends who may be confused by the lies of today’s socialists.