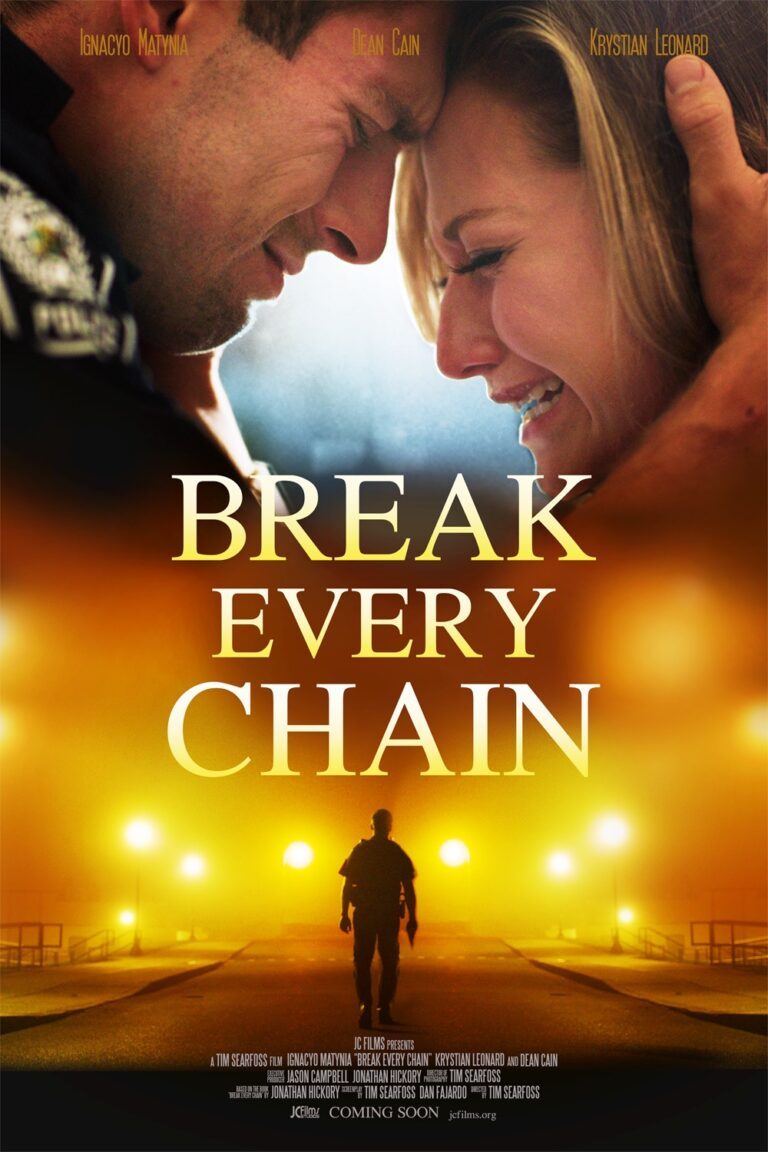 BREAK EVERY CHAIN is based on the true story of West Virginia police officer Jonathan Hickory. As a first-responder, Jonathan is shocked by what he sees and turns to alcohol and anger toward God. While his career as an officer advances, Jonathan‘s depression worsens. Jonathan is angry at God and begins to neglect his wife and child. Tragedy strikes close to home when his wife suffers a miscarriage. Broken and lost, Jonathan continues to forsake God and turns to alcoholism instead of caring for his broken family. Jonathan risks losing everything he holds dear unless he turns to faith and surrenders to the God he’s hated all his life.

BREAK EVERY CHAIN is an intense, heartbreaking, yet hopeful and ultimately inspiring, story about the inner turmoil that first-responders face. The movie’s camerawork and tone capture well the depth of Jonathan’s addiction and depression. The story deals with heavy subject matter like alcoholism, suicide and death. However, it has a strong Christian, pro-family worldview that champions Jesus, Church, prayer, forgiveness, and, ultimately, redemption. MOVIEGUIDE® advises caution for sensitive older children and teenagers.

(CCC, BB, VV, AAA, S, M):
Dominant Worldview and Other Worldview Content/Elements:
Very strong Christian worldview stresses church, prayer, reading the Bible, and the power of prayer and forgiveness over sin, with strong moral, pro-family elements, plus movie highlights the idea that Jesus has come to heal any wound
Foul Language:
No foul language
Violence:
While there is little blood, Jonathan’s job as a police officer puts him in many violent situations, there are also some intense images of the aftermath of vehicle accidents, while these are not gory, they could frighten younger viewers, due to Jonathan’s alcoholism, there are several violent outbursts, there is a miscarriage, there is a chase scene where a man pulls a gun on an officer, he is tased in the back before he can pull the trigger, a group of drunk men are firing guns at an oncoming train, however, no one is injured, the movie does a good job of showing intense and otherwise dark material in a non-gory way, and a man contemplates suicide but goes to church instead
Sex:
It’s implied main character is unfaithful to his wife
Nudity:
No nudity
Alcohol Use:
The lead character’s main struggle is alcoholism, there is heavy drinking throughout, several scenes show men drinking at a bar, lead character eventually starts bringing alcohol home and hiding it around the house, he is seen drinking hard liquor in several scenes to cope with tragedy; and,
Smoking and/or Drug Use and Abuse:
No smoking or drugs;
Miscellaneous Immorality:
A man neglects his family as they deal with tragedy, he turns to alcoholism instead of caring for his wife, and, despite the vices portrayed in the movie, the resounding note of the movie is redemption through the power of Jesus and forgiveness between Jonathan and his wife.

BREAK EVERY CHAIN is based on the true story of West Virginia Police officer Jonathan Hickory and stars Dean Cain and Ignacyo Matyni.

The movie starts with a flashback to when Jonathan was a child. Jonathan loves his father but finds it hard to comprehend his feelings toward his father when he gets sick. When Hickory‘s father dies, Jonathan’s lack of interaction with him fuels his anger toward God.

However, Jonathan joins the police academy and meets the girl of his dreams, Stacy. Despite his past, Jonathan is excited to start his career as an officer and his life with Stacy. After graduating from the police academy with flying colors, he decides to marry Stacy. They begin their new life together, hopeful for the future.

However, on Jonathan‘s first day, he realizes that training to become a police officer is much different from real life. After an intense first day on the job, Jonathan is haunted by the death and depravity he’s seen. While his partner reveals that he is Christian and copes by praying and reading the Bible, Jonathan wants nothing to do with God.

Instead of going home, Jonathan decides to celebrate his first day with drinks at a bar. Soon, Jonathan‘s first day turns into many, and he develops an alcohol addiction. As Jonathan‘s depression deepens, his wife Stacy prays for her husband to heal.

The news of a child helps lift Jonathan out of his depression for a time, but he can’t give up his alcoholism. Ironically, he becomes a decorated police officer, and his career progresses while the rest of his life begins to crumble.

A personal tragedy pushes Stacy and Jonathan to the breaking point. Instead of helping his family through the loss, he continues to turn away from God and toward alcohol. Jonathan must decide to turn towards faith in Jesus, or he may lose his job, family and even his life.

BREAK EVERY CHAIN is the heartbreaking yet hopeful look into the internal turmoil that first-responders face through the true story of Jonathan Hickory, played by Ignacyo Matynia. The movie also stars Dean Cain. The cinematography and overall tone of the movie capture well the depth of Jonathan‘s addiction and depression. While the story deals with heavy subject matter like alcoholism, suicide and death, it has a strong moral Christian worldview that champions Jesus, Church, forgiveness, and ultimately redemption. MOVIEGUIDE® advises caution for sensitive older children and teenagers due to alcohol abuse and some intense images of death in BREAK EVERY CHAIN.