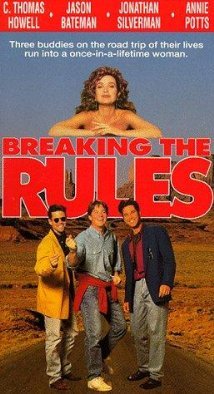 BREAKING THE RULES is about three friends who journey from Cleveland to California to deal with the pending death of one of them. The journey explores their relationship and their hollow philosophies. The film is mediocre throughout: in cinematography, in acting and in its failure to deal realistically with the eternal question of what happens after death.

The movie BREAKING THE RULES, opens in 1982 in Cleveland, Ohio, and tells about Phil, Robert and Gene, who comprise a singing group. Ten years later, Robert and Gene discover Phil has a fatal illness (probably AIDS), and he wants them to accompany him to California. When the three reach Missouri, Robert meets an attractive blonde. When Robert goes to her place, she tells him to kneel down before the bathtub so his “soul can be saved”–a mockery of baptism. Later, they take up with a waitress, Mary Albert Klinglich, who continues on the trip with them. In Las Vegas, Phil and Mary get married. On their wedding night, since Phil has no desire to consummate their marriage, Mary and Robert go to bed together–in the same room with the other two! Phil dies soon after the wedding.

BREAKING THE RULES is mediocre throughout: in cinematography, in acting and in its failure to deal with the eternal question of what happens after death. Even though they neglected this important question, however, each one of them will have to appear before God at the Judgment–a sobering thought, indeed, when each of them is so ill-prepared, not having received Christ as their Savior.