BY THE GRACE OF GOD

"The Church Is a Hospital for Sinners, Not a Castle for Saints" 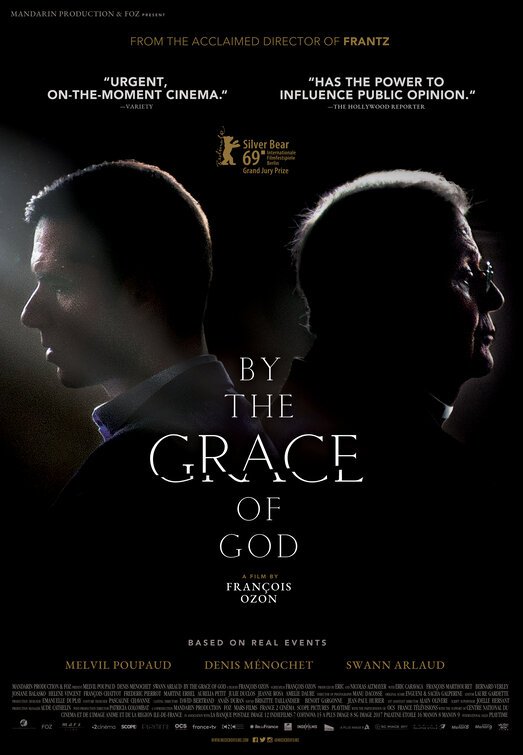 BY THE GRACE OF GOD is a French drama. It follows three grown men, Alexandre, François, and Emmanuel, decades after they were sexually harassed by a priest in the Catholic Church who’s become a Cardinal. Spanning a few years, the movie shows the men banding together to expose the truth. The movie’s narrative is based on true events, which makes the ending of movie, where the criminal case isn’t resolved, more sobering. The men’s experiences affect their faith in different ways.

BY THE GRACE OF GOD is a challenging movie to watch because it’s impossible not to empathize with the injustice of the molestation, especially at the hands of church leaders. It maintains a Christian, biblical worldview that extols caring for your family, celebrating Christmas, devotion to the church community, forgiveness, and admitting sinful behavior. However, there are also elements where Scripture is taken out of context, and Christians in leadership abuse young children. Though the behavior is rebuked repeatedly, these elements, graphic descriptions of molestation and rape, talk of suicide, and other unsavory elements make BY THE GRACE OF GOD unacceptable.

(CC, BB, AbAb, HoHo, LLL, VV, SS, NN, A, DD, MM):
Dominant Worldview and Other Worldview Content/Elements:
Strong Christian, biblical worldview, in. a Catholic context, piety to the Catholic Church showcased, marriage seen as important, and married couples support one another during adversity, teenage boys get confirmed in the church, Lord’s prayer recited, some Hail Mary’s are said, talk of forgiveness, and apologizing for sinful behavior extolled, mixed with some anti-biblical worldview and some theological missteps as a priest uses Jesus’s interaction with children to justify him molesting them, a church tries to cover up the abuse and says “By the grace of God” incorrectly when referring to how the church avoided the news of the abuse going public, wife character says a comment “if you forgive him you’ll be his prisoner,” a haunting comment by a cardinal where he tries to get a character to stop referring to a priest as a pedophile because in the etymological sense “pedophilia means to love children,” discussions throughout movie about the need to distinguish pedophilia from homosexuality, even though the accused priest only seemed to abuse young boys
Foul Language:
About 27 obscenities (about nine “f” words), one GD profanity, several references to male private parts using slang, and character vomits, but it’s not shown.
Violence:
Strong violence includes references to raping children, child molestation and the long-term physical consequences of doing so, graphic descriptions of men recalling being molested but nothing is shown, dating couple gets into a physical fight where a man hits a woman across the face and he spits in anger, threat to kill someone said in passing conversation, but it’s not taken very seriously, and character suffers from a few seizures upon hearing some bad news, although he turns out to be fine he does violently contort on the floor
Sex:
References to pedophilia, child molestation and rape, and implied fornication
Nudity:
Upper male nudity, woman’s bare breasts shown while she sits next to a man who’s laying down with only a covering on his private parts, male character’s bare behind shown when he’s at the doctor’s office, male character shows a lawyer a picture of his private parts to prove that he was abused
Alcohol Use:
Character have alcohol with dinner
Smoking and/or Drug Use and Abuse:
Smoking in several scenes, characters roll and smoke a marijuana cigarette, character takes medication for seizures, syringe depicted, character recalls he’s tried all sorts of remedies to cure himself of his seizures but doesn’t go into too much detail; and,
Miscellaneous Immorality:
Multiple instances of family discord, character steals a document from the police, name-calling, jealously, eavesdropping.

BY THE GRACE OF GOD, a French movie, follows three grown men, Alexandre, François and Emmanuel, decades after they were sexually harassed by a priest in the Catholic church. The movie spans the course of a few years but tells audiences of the change in season. BY THE GRACE OF GOD maintains a predominant Christian and Biblical worldview, but there are also elements where Scripture is taken out of context, and people of the faith in leadership use their position to abuse young children. Due to these elements, graphic descriptions of molestation and rape, talk of suicide, and other unsavory elements, MOVIEGUIDE® advises excessive.

The movie opens with a prayer and an Archbishop walking on a rooftop. Cut to Alexandre, a middle-aged man with five children. Alexandre explains that, despite being molested in his youth, church remains a priority in the lives of his family, and that he’s still close to God.

Alexandre, with the support of his wife, decides to take his story to a counselor. He meets with Bernard Preynat, the priest who he claims molested him, in the company of his counselor. He expresses his hurt, and Preynat doesn’t deny that he molested him. The three pray and part ways, but Alexandre continues to make sure that the Catholic church hierarchy knows about the incident so that it doesn’t happen again to another boy. However, the local bishop stifles Alexandre’s efforts, so he takes matters to the French police.

Meanwhile, another victim, François, enters the picture. At first, he’s hesitant to speak about his encounters with Preynat because he wants to protect his children and family. However, he eventually joins the efforts to make this public knowledge. François and another character, Giles, form an organization that catches the eye of Emmanuel, the third victim of Perynat.

Emmanuel, at first, calls Francois in the middle of the night and relays his repressed memories of his childhood molestation by Preynat. The two meet sometime later, and Emmanuel, who lives with his aging mother, shares his story with the authorities. At one point, Preynat comes into the police station and, like his meeting with Alexandre, owns up to his sin. Still, those who accuse him marvel that he’s not behind bars or, at least, defrocked from his priestly duties.

All the while, the three men maintain varying views on the Christian faith. Alexandre believes in God and asserts that exposing the truth should be done in tandem with the Catholic Church. François is more callous towards the church and claims to be an atheist but also wants to expose the truth to help those in the church, even though he left the faith. Emmanuel seems to be somewhere in the middle.

The rest of the movie examines the men’s spiritual attitude toward God and the Catholic Church. The last line of dialogue in the movie is, “Do you believe in God?”

BY THE GRACE OF GOD is a challenging movie to watch because it’s impossible not to empathize with the injustice of the molestation, especially at the hands of church officials. The movie’s narrative is also based on true events, which makes the ending of movie, where the criminal case isn’t resolved, even more sobering. BY THE GRACE OF GOD will remind Christians that the devil does indeed come to “steal, kill and destroy,” and this leaves lasting consequences and questions for people of faith and those who don’t believe in God.

BY THE GRACE OF GOD relies heavily on voiceover to capture the narrative. The movie begins at a fast pace and doesn’t slow down, largely due in part as the filmmakers have to fit decades of story into a reasonable amount of time. Still, this shouldn’t deter viewers because the movie’s complex material still manages to hold the viewer’s attention. Since the movie grapples with mature elements, the filmmakers don’t make a point in glorifying any of it. They try to capture the gravity of the child molestation through flashbacks that suggest it happens, choosing not to show anything graphic. That said, the dialogue of the men as adults is quite descriptive.

BY THE GRACE OF GOD maintains a predominant Christian, biblical worldview. Some Christian elements such as caring for your family, celebrating Christmas, devotion to the church community, forgiveness, and admitting sinful behavior are extolled. However, there are also elements where Scripture is taken out of context, and people of the faith in leadership use their position to abuse young children, but positively all of that behavior is rebuked repeatedly and not made to seem attractive. Due to the mature subject matter, some graphic descriptions of molestation and rape, talk of suicide, and other unsavory elements, make BY THE GRACE OF GOD unacceptable.