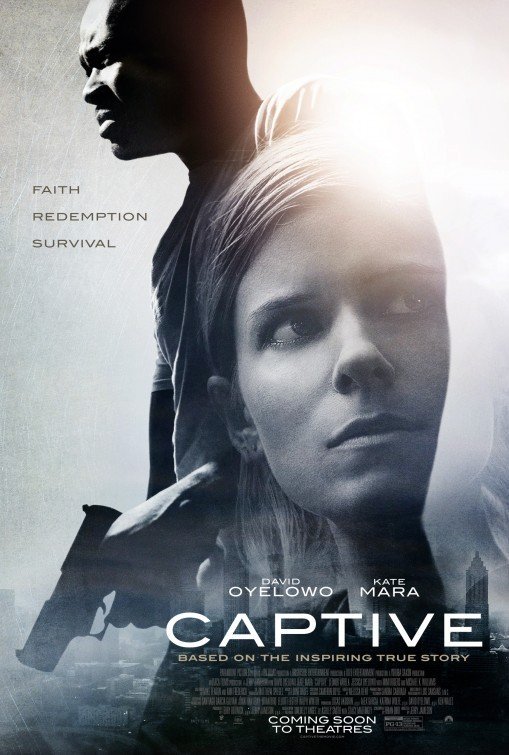 CAPTIVE is a powerful movie based on an inspiring true story about a broken woman who reads THE PURPOSE DRIVEN LIFE to a killer. Ashley Smith is in a Christian support group for a meth addiction, but she loves her daughter. The woman heading the group gives Ashley a copy of Rick Warren’s THE PURPOSE DRIVEN LIFE. Cut to a prisoner, Brian Nichols, who shoots and kills several people to escape. Eventually, he takes Ashley captive, but Ashley reads from THE PURPOSE DRIVEN LIFE. Both are greatly moved by what she reads, but will Brian fully accept God’s gift of life and let Ashley go?

CAPTIVE is extremely intense and well plotted. The jeopardy is constant. The acting is superb. The movie doesn’t let up for a second. No one could ask for more. The Christian references in CAPTIVE are very evangelistic and powerful. CAPTIVE isn’t a movie for children, however. It shows drugs and violence are bad, but it does show drugs and violence. So, it’s a mature audience movie, but it’s very well produced, incredibly suspenseful, entertaining, and very inspiring.

CAPTIVE is a powerful movie based on an inspiring true story about a broken woman who reads THE PURPOSE DRIVEN LIFE to a manic killer. The movie is extremely well directed with intense jeopardy dealing with dark subject matter.

The movie opens by quoting Romans 5:20, “Where sin increased, grace abounded all the more.” A very young girl, Paige, is talking to her mother, Ashley Smith. They love each other deeply. What appears to be an idyllic situation is shattered when the movie cuts to Ashley in a Christian support group talking about her meth addiction and her need to get clean from the addiction to get Paige back. The support group ends with prayer to surrender all to God. The woman who heads the group hands Ashley a copy of Rick Warren’s THE PURPOSE DRIVEN LIFE, which Ashley throws in the garbage.

Cut to a prisoner, Brian Nichols, being led by a female guard into a prison cell. When she releases his handcuffs, he beats her up, finds her gun, takes her police radio, heads to the courtroom, shoots the judge pointblank, shoots several other people, and runs from the courtroom while killing a guard.

Brian is a smart, strong, psychotic African American man. While trying to escape the police, he goes to his girlfriend’s house to see his newborn son. As Brian knocks on the door, the police pull up, so he must run again. Eventually, in the middle of the night, he sees Ashley returning to her apartment. He takes her hostage and hides out in her apartment. When she lies to him, he treats her roughly. She is panicked because she’s supposed to be seeing her daughter Paige, who’s staying with her Aunt Kim, at her daughter’s fashion show. Ashley feels she must see her daughter not to disappoint her any more.

Brian asks Ashley if she has any drugs. Ashley admits to having ICE or crystal meth. He snorts it and gets very intense. There’s a constant threat of sex and violence.

Eventually, by God’s Grace, when Ashley prays for God to help her, Brian settles down. Ashley starts reading him THE PURPOSE DRIVEN LIFE, which her counselor delivered personally to her again at her job after she had thrown the book away. At first, Brian rejects it, but then he starts to understand that finding your purpose first means finding God and finding His will for your life, not yours. Even so, will Brian fully accept God’s gift of life and let Ashley go?

CAPTIVE is extremely intense and well plotted. The jeopardy is constant. The acting is superb. The movie doesn’t let up for a second. No one could ask for more.

Brian makes two negative remarks about church, that he caught his wife having an affair with one of the pastors and that his father took him to church every day but was an alcoholic. These remarks are regrettable because there are bad people in church, but church is the Body of Christ, and so is good. However, the references to Jesus and God’s grace, the answered prayers, and the wonderful readings from THE PURPOSE DRIVEN LIFE are extremely evangelistic in this well-made Hollywood movie.

CAPTIVE isn’t a movie for children. It shows drugs and violence are bad, but it does show drugs and violence. So, it’s a mature audience movie, but it’s very well produced, extremely suspenseful, entertaining and very inspiring.

Listen to an Interview with the Screenwriter of CAPTIVE, Brian Bird, on the Movieguide® Podcast