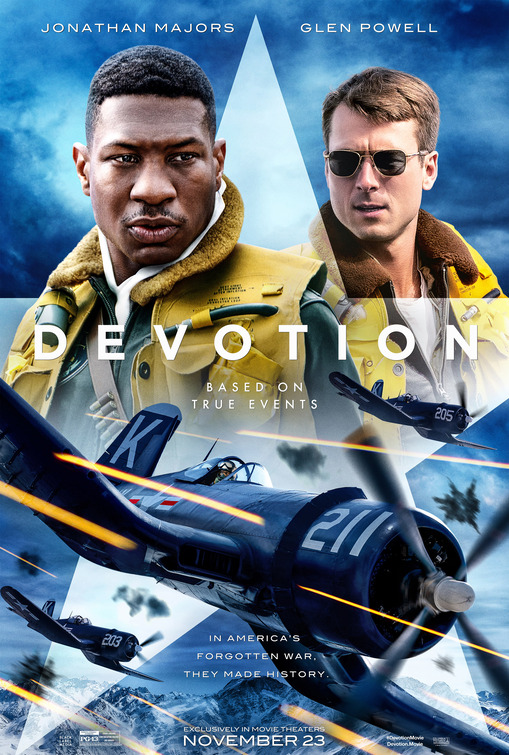 DEVOTION tells the true story of Jesse Brown, the first African American Navy fighter pilot, who fought in the Korean War. Transferred to a new base, Jesse meets Lieutenant Tom Hudner, a white fighter pilot who’ll be his partner. All his adult life, Jesse has heard he isn’t going to make it as an aviator, because of his skin color. Jesse perseveres in the midst of adversity to become an incredibly talented aviator. When he and Tom start fighting in the Korean War, the jeopardy skyrockets. Will Jesse make it back safely to his family?

DEVOTION is a powerful story with lots of suspense and jeopardy. It has a strong Christian, moral worldview with strong patriotic content. The two fighter pilots support each other, are committed to their families, sacrifice for others, and always want to do the right thing. The movie’s overt Christian content includes prayer and a Christian character wearing a cross. It could have used more Christian content, however, since the true story is about two men of great faith. DEVOTION has too much cursing. So, MOVIEGUIDE® advises extreme caution.

(CC, BB, PPP, ACACAC, LLL, V, S, AA, D, M):
Dominant Worldview and Other Worldview Content/Elements:
Strong Christian, moral, pro-family worldview with very strong Pro-American, patriotic, anti-communist content about being of good character and promotes loyalty, duty, being loyal, doing the right thing, and sacrificing for others, with some overt Cristian content including prayer, and a Christian character wears a cross
Foul Language:
28 obscenities and three strong Jesus profanities
Violence:
Man yells at himself in the mirror, war violence with shooting, man is shot and dies, man dies in burning plane
Sex:
Mentions of a house of prostitution, and married couple kisses
Nudity:
No nudity
Alcohol Use:
Some drinking and drunkenness
Smoking and/or Drug Use and Abuse:
Smoking but no drugs; and,
Miscellaneous Immorality:
Some racism/prejudice but rebuked.

DEVOTION tells the true story of the first African American U.S. Navy fighter pilot who also fought in the Korean War. DEVOTION is a powerful story with a strong Christian, biblical, patriotic values stressing family, sacrifice, duty, honor, and doing the right thing, but the movie has about 30 obscenities and profanities in it and some war violence.

Lieutenant Tom Hudner is starting at a new base and meets Jesse Brown, who will be his partner in the air. All his life, Jesse has heard that he was not going to make it as an aviator, due to being African American. Jesse continued, even in the midst of adversity, and has incredible talent as an aviator.

At first, Jesse does not trust Tom’s good intentions and questions if he has his back in hard circumstances. Tom starts to show his character and show that he is a man who is loyal and committed.

One day when Jesse’s car breaks down, Tom sees Jesse and takes him to his home. Tom now sees that Jesse has a soft side, and deeply loves his wife and daughter. Jesse’s wife, Daisy, tells Tom to protect Jesse and be the wingman he should be.

When Tom and Jesse get called in to the Korean War, and they fear that they may not come home. Will Jesse make it back to his beautiful family? Will Tom protect and serve his country?

DEVOTION is a well done story about what it means to be of good character. The movie demonstrates two characters who support each other, are committed to their families, and always want to do the right thing. It has lots of suspense and jeopardy as the aviators are trying to accomplish extremely hard, dangerous tasks. Also, the cinematography and acting are excellent.

DEVOTION has a strong Christian, moral worldview promoting good character and sacrifice. One main character is a wonderful and loving father and husband. The other main character also shows strength and nobility of character as well. The movie contains some overt Christian content, including prayer and a Christian character who wears a cross. Despite this, DEVOTION could have used more Christian faith since the true story is based on two men of great faith. Also, the movie has about 30 obscenities and profanities in it and some war violence. So, MOVIEGUIDE® advises extreme caution.

Erin Napier Issues Urgent Call to Prayer from Fans: ‘Hoping for a Miracle’