DUCK DYNASTY: TILL DUCK DO US PART 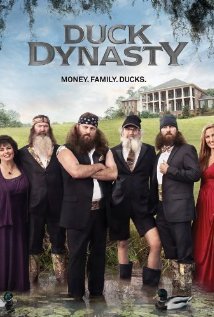 “Till Duck Do Us Part,” the first episode of Season Four of DUCK DYNASTY, is one of the best DUCK DYNASTY episodes. The wives of three of the Robertson brothers rope them into holding a surprise wedding ceremony for their father and mother, Phil and Kay. Apparently, Miss Kay never got the “fairy tale” wedding she wanted when they first got married. Uncle Si provides the diversion so they can set up the outdoor wedding area near Phil and Kay’s home on the bayou. However, Si almost bungles the job, while his three bearded nephews complain. All turns out well, of course.

“Till Duck Do Us Part” is hilarious. The ending also provides some heartfelt, tearful moments. Both Phil and his oldest son, Alan, are pastors, and Alan performs the ceremony. Consequently, the episode contains positive references to God and prayer, and mentions the importance of producing “godly” children. Thus, amid all the hilarity, “Till Duck Do Us Part” celebrates values that are the foundation of all good civilization – God, marriage and family. That’s a culture-wise message every media-wise family can support.

(CCC, BBB, PPP, L, M) Very strong Christian, moral worldview celebrating American, Western, Christian values of God, marriage, and family, with positive references to God, a comment about producing “godly” children, and a prayer; one light “Oh God” borderline profanity and a reference to possibly having to take “a leak”; no violence; no sex; no nudity, but talk about a brother running around naked when he was a child; no alcohol; no smoking or drugs; and, a couple joke references to a dilapidated house looking like a crack house, comical references to husbands being “whipped” by their wives, friendly teasing, and jokes about family members and their character traits.

DUCK DYNASTY has become a Cable TV and ratings phenomenon. It’s a comical show about a family in the bayou country of Louisiana outside Monroe. The family runs a couple multi-million dollar hunting companies called Duck Commander and Buck Commander. The patriarch and matriarch of the family are the Rev. Phil Robertson and his wife, Kay. Their son, Willie, runs their two companies, while Willie’s two other brothers, Jase and Jep, work in the company and its very relaxed atmosphere. Then, for comic relief, there’s Phil’s younger brother, Si, a Vietnam veteran with a goofy temperament hiding a witty, serious and loyal character. All the men are bearded, except for the eldest brother, Alan, who’s a pastor but seldom appears on the show.

The first episode of Season Four of DUCK DYNASTY, “Till Duck Do Us Part,” is one of the best episodes in the series so far. It’s extremely funny and leads to a great ending.

The episode opens with Willie and his brother, Jep, playing Battleship. Jep is getting the best of Willie in the game, which perturbs Willie to no end.

Willie’s wife Korie brings up the fact that his father and mother, Phil and Kay, are having a “big” wedding anniversary coming up. She says the family should do something special for Phil and Kay. Korie tries to convince Willie that he comes up with the idea to do a surprise wedding for them, something Phil and Kay never had.

All the Robertson brothers chafe at this plan, but Korie and the other wives soon whip their men into shape. Figuratively speaking, of course. However, this does lead to a lot of jokes about the men being “whipped.”

Korie assigns Uncle Si to get Phil and Kay away from the house, so that the Robertson clan can set up an outdoor wedding nearby. Si almost bungles the job from the start, but he manages to accomplish the task. He tells Phil and Kay he’s taking them out to get ice cream, but along the way, he drives them to places that played an important part in their early lives together. The problem is, Si’s memory is not quite the same as Phil and Kay’s.

Meanwhile, back at their house near a beautiful fishing stream, the Robertson clan is busy designing a nice little outdoor makeshift wedding area. Brother Jase is getting a little bored, however, and he sneaks off to do some fishing.

“Till Duck Do Us Part” is hilarious. The Robertson brothers like to tease one another, which leads to a lot of funny moments. Uncle Si is always pretty funny, as he seems to bumble his way through life. In real life, however, Si is a serious man, and that comes through occasionally in the series, as it does here when he gives a wonderful short little speech before his brother Phil and Kay are about to say their final I Do’s. Another heartfelt moment is Kay’s comment that she’s finally getting the “fairy tale” wedding she’s always wanted.

Consequently, the ending of “Till Duck Do Us Part” generates some good tears as well as a lot of good laughter. Best of all, there are several positive references to God, a final prayer, and a comment about the importance of producing “godly” children. Thus, amid all the hilarity, “Till Duck Do Us Part” celebrates the values that are the foundation of all good civilization – God, marriage and family. That’s a culture-wise message every media-wise family can support.

This episode is being rerun Thanksgiving, Nov. 28 on A&E. Check your local listings for time and location.