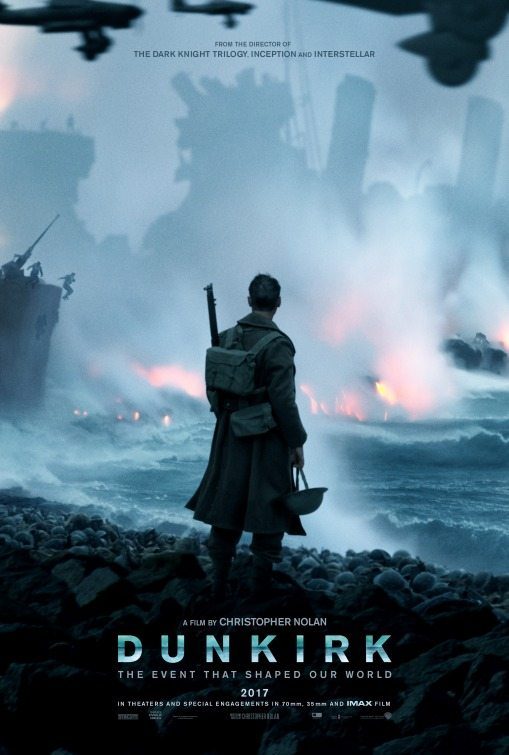 DUNKIRK is a superb war movie about the evacuation of Dunkirk, France in 1940, when thousands of British, French and Belgian troops were surrounded by the Germans and looking for miraculous deliverance. The action takes place on land, at sea and in the air. On land, 300,000 soldiers need to retreat from the Germans, but the German air force keeps blowing up their boats. British pilots try to shoot down the German planes, to save the men. When British civilians hear the news, they sail hundreds of small boats to Dunkirk to rescue the men.

DUNKIRK is an excellent war movie, with beautiful cinematography, and a strong moral, patriotic worldview, but it ignores the detailed, verified miracles that occurred. The soundtrack is also amazing, and there’s high tension throughout the movie, despite different plot strands. The movie often stresses the sacrifices the soldiers and civilians made during this miraculous event. There isn’t one example of sacrifice; rather, there are many strong examples of sacrifice. DUNKIRK is well worth seeing, but it has some foul language and war violence; so, caution is advised.

(BBB, C, RH, L, VV) Very strong moral, patriotic worldview about a major event during World War II, with redemptive elements including some talk about needing a miracle and several characters sacrifice for one another, but the movie leaves out the call for prayer in Great Britain that accompanied the event; seven obscenities (including two “f” words) and two strong profanities using Christ’s name, plus man urinates but nothing is shown; war violence which is not gruesome and bloody, planes shooting at other planes, bombs destroying ships and men flying off, young man is pushed down stairs and hits his head and passes away; no sexual content; no nudity; no alcohol use; no smoking or drug use;

DUNKIRK is a superb war movie about the events occurring on the beaches of Dunkirk, France in Spring 1940, when thousands of British troops were surrounded by the Germans and were looking for deliverance. DUNKIRK is extremely well made and suspenseful, with beautiful cinematography and a strong moral, patriotic worldview, but there is some foul language and war violence, so caution is required.

Tommy is a young British soldier in the army stuck on the beach at Dunkirk while the German’s are taking over France. Each day the Germans are getting closer and closer to the Dunkirk beaches, and all the soldiers can do is hope for a miracle. Tommy meets another soldier, Gibson, and the two pick up a man, who is badly injured, and try to make it to the boat taking the injured and medics. They put the man on the boat, but because they don’t have medical badges, they are thrown off. Just as the boat takes off, a bomb destroys the boat and takes down all the men.

Luckily for Tommy and Gibson, they are able to get on another boat, where Tommy meets a young man named Alex. Now, the three of them have formed an unspoken bond, but the boat, which they thought would be their miracle, also is attacked and they must retreat.

Meanwhile, British civilians have been alerted that help is needed across the channel. One father, named Dawcett, and his son, head off in the direction of Dunkirk, knowing that this is a challenging mission, sailing in a small yacht in the midst of war. A young man named George jumps on their boat to go with them, wanting to help, but not fully understanding the gravity of the situation.

Along the way, they pick up a soldier who won’t tell them his name. The man is in complete shock from what he has gone through and begs Dawcett not to go back to Dunkirk. He gets so outraged he pushes George down the stairs, and George hits his head and is severely injured. Dawcett keeps moving toward the beach and is willing to do whatever it takes in order to save some of the men waiting on the beach.

By air, two pilots, named Collins and Farrier, are fighting against the Germans. Both have been able to take down a German plane, but Farrier is running out of gas quickly. As they are working together, Collins is taken down, but Farrier continues fighting the fight.

DUNKIRK is an extremely well made movie, with a powerful script and great acting. The movie takes place in the air, on land and at sea, and at different times, but is still brilliantly weaved together. Surprisingly, there isn’t much dialogue in the movie, but audiences are clear about what is occurring, and the actors do an incredible job with their characters and the emotions portrayed. Also, the cinematography is beautifully done, helped along with an incredible soundtrack.

DUNKIRK has a strong moral, patriotic worldview with a redemptive emphasis of sacrifice. There isn’t just one example of sacrifice; rather, there are many very strong examples of sacrifice. The movie also has a tag line of the men “hoping for deliverance, hoping for a miracle” and ultimately the miracle occurs.

One slight critique is that the filmmakers don’t show the National Day of Prayer that was declared on May 26 that year for the soldiers trapped at Dunkirk, when people from all walks of life came to British churches to pray. It was this call to prayer that led so many civilians to bring their boats to Dunkirk to help save the valiant soldiers. It also led to a storm that stopped the German airplanes from engaging in a mass attack on the stranded soldiers. Meanwhile, God calmed the waters on the English Channel just long enough for the mass rescue to be completed. Overall, however, DUNKIRK is a powerful, inspiring movie, but there is some wartime violence and foul language, so caution is advised.

This is from the article on the true history of the miracle at Dunkirk on the www.movieguide.org site:

“His Majesty King George VI requested that Sunday, 26 May should be observed as a National Day of Prayer. In a stirring broadcast, he called the people of Britain and of the Empire to commit their cause to God. Together with members of the Cabinet, the King attended Westminster Abbey, whilst millions of his subjects in all parts of the Commonwealth and Empire flocked to the churches to join in prayer. Britain was given inspiring leadership in those days, and her people responded immediately when this kind of initiative was taken. The whole nation was at prayer on that Sunday. The scene outside Westminster Abbey was remarkable—photographs show long queues of people who could not even get in, the Abbey was so crowded! So much so, that the following morning the Daily Sketch exclaimed, “Nothing like it has ever happened before.

“The first was that for some reason – which has never yet been fully explained – Hitler overruled his generals and halted the advance of his armored columns at the very point when they could have proceeded to the British army’s annihilation. They were now only 10 miles away! Later, Mr. Churchill asserted in his memoirs that this was because Hitler undoubtedly believed “that his air superiority would be sufficient to prevent a large-scale evacuation by sea.” That is very significant in terms of the second miracle.

Despite the storm in Flanders, a great calm—such as has rarely been experienced—settled over the English Channel during the days which followed, and its waters became as still as a mill pond. It was this quite extraordinary calm which enabled a vast armada of little ships, big ships, warships, privately owned motor-cruisers from British rivers and estuaries – in fact, almost anything that would float – to ply back and forth in a desperate bid to rescue as many of our men as possible.”