"The Blind Following the Blind" 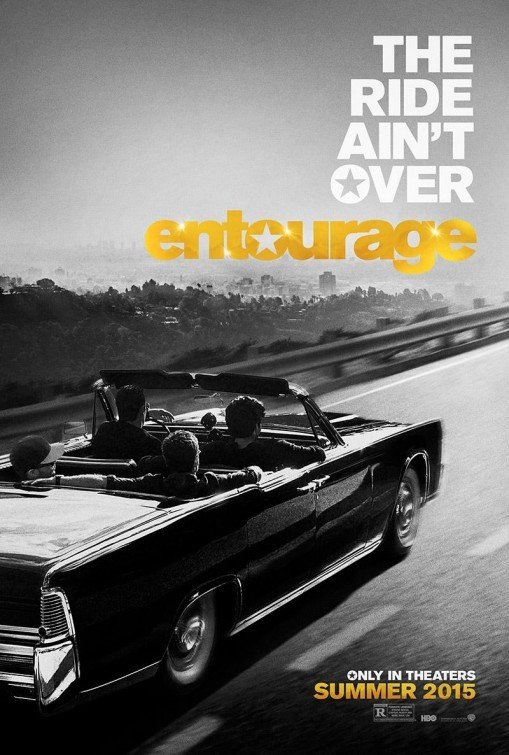 ENTOURAGE is a comedy derived from the HBO series of the same name. In this case, the team goes into production on an audacious movie project that their actor friend, Vince, will direct as well as star. This development doesn’t instill confidence in the financiers, and it leads to a funding crisis before the movie is completed. Meanwhile, the characters indulge themselves with lavish parties, sex, drugs, and booze.

Those who liked the ENTOURAGE series may like this big screen version, which is more of the same. However, the movie has a very thin plot. Also, the characters are unlikeable, and the laughs are few and far between. Sadly, most of the characters are narcissistic pleasure seekers. Religion plays no role. Although prayer is mentioned briefly, it isn’t done in a faithful or reverent context. Various celebrities appear, but mostly they just spout more obscenities and add little else. Though one character is happily married, casual sex is openly shown and celebrated. Drug use and excessive alcohol use are also celebrated, as is a same-sex wedding. ENTOURAGE is a sleazy, abhorrent movie.

(PaPaPa, HoHoHo, B, AbAb, FRFR, LLL, VV, SSS, NN, AAA, DDD, MM) Very strong pagan, hedonistic, materialistic worldview with very strong pro-homosexual content, including a same-sex wedding scene, in a comedy context, plus some praying implied, and one Jewish man seems to have a good marriage, but it’s not really serious, and man says he only uses God to get “good stuff”; at least 101 obscenities and five profanities; one instance of violence showing a police car being turned over, woman is shot, and people throw Molotov cocktails at police in a movie within the movie, a threat of violence, woman hits hood of a car with a crowbar, and a judo fight in a ring; very strong sexual content and immorality includes depicted fornication and intercourse with many lines of crude dialogue and references to private parts, references to self abuse, partially depicted oral sex between two women, women kiss one another at wild party, suggestive dancing, a same-sex wedding is celebrated at the end; multiple shots of upper female and male nudity, a shot of rear female nudity; lots of alcohol use, some drunkenness, and a man’s drink secretly has Viagra in it; brief cigarette smoking, smoking cigars, marijuana use shown, a reference to meth, a reference to cocaine, man has a wine glass full of pills and one person takes one, Viagra snuck into one man’s drink, people in movie are shown getting some kind of fantasy drug; and, lying, cheating, two females deceive a man to make him think he had sexual relations with them and teach him a lesson, and a character’s actions are motivated by revenge.

ENTOURAGE is a feature length movie of the HBO TV series that focuses on the friends of a movie star helping him make a movie he’s being allowed to direct. Though fans of the TV show may like it, ENTOURAGE is a sleazy, abhorrent affair that contains a preposterous plot, unlikeable characters, abundant crude language, lots of lewd activity and substance abuse, and a same-sex wedding celebration at the end.

The opening scene reveals a large speedboat fast approaching a luxurious private ocean vessel off the coast of Ibiza, Spain. On the ship, a party is going on full blast with Hollywood types and beautiful girls in bikinis. The arrival party happens to be the friends and brothers of Vince Chase (Adrian Grenier), a movie star who’s negotiating a new movie deal with his agent turned studio head, Ari Gold (Jeremy Piven). Vince agrees to star in the movie, but he also wants to direct it, adding a dicey twist to the project. Vince has also just annulled his recent marriage, claiming they didn’t have much to say to each other, so they just had sex one last time and quit.

In an all for one and one for all spirit, Vince’s entourage, consisting of Johnny Drama (Kevin Dillon), Eric (Kevin Connolly) and Turtle (Jerry Ferrara), are all in for Vince’s plan to direct the movie. Seven months later, the movie is just about finished, but the money has run out and more is needed. As the pressure mounts, Ari has to look far and wide for an additional investment. He resorts to wealthy Texas financier Larsen McCredle, played by Billy Bob Thornton.

Without having seen the movie, McCredle balks and sends his duplicitous, narcissistic son Travis (Haley Joel Osment) to decide if the movie is worth the money. Vince puts on a decadent Hollywood style bash where he will screen the movie for the attendees, but at the last minute he changes his mind and promises to send the audience a DVD. Ari is beside himself, and Travis cancels the final funding. This threatens Ari’s very status as studio head, and the movie itself from ever seeing the light of a projector. It is now up to Ari to find a way to dig himself out of the big money hole. In the middle of it all, Ari’s homosexual friend, Lloyd (Rex Lee), keeps calling him repeatedly and insisting he give him away at his same-sex wedding.

Based on the award winning HBO hit series, this happens to be the movie version of episode number nine. Those who liked and followed the series will probably like this big screen version as well, which is basically more of the same.

However, the movie is built on a very thin, unrealistic plot. Also, the acting is professional, but the characters aren’t very likable. In addition, although ENTOURAGE is billed as a comedy, the laughs are few and far between.

Sadly, right from the beginning when Vince announces he’s annulled his marriage for the most ridiculous of frivolous reasons, the audience is barraged with a non-ending salvo of sexual jokes and innuendo, obscenities, and a few profanities sprinkled here and there to enhance the salty language. Except for Ari, who is Jewish and married, none of the characters seem to have any sense of what has been known as traditional morality. Casual sex is openly shown, and it is not only accepted, but also celebrated. ENTOURAGE also has lots of strong foul language and alcohol and drug abuse.

Adding Piers Morgan as an entertainment reporter and various celebrities such as Jessica Alba, Mark Wahlberg, Liam Neeson, Gary Busey, and Kelsey Grammer, to name a few appearing in cameo roles, doesn’t help lift the preposterous plot from the mud, especially when each of them were either asked, or volunteered, to blurt out obscenities themselves. Except for Ari’s wife (Perrey Reeves), most females in the movie are shown as sex objects decorating the background. Even producer Eric’s wife, who’s about to have his baby, seems to be perfectly fine with her ex-husband’s immoral lifestyle while discussing with him the possibility of getting back together.

The brief glimpse of Vince’s movie shows the police embroiled in a street riot with multiple fires and a police car getting turned over. Civilians in the scene are being attacked by the police. Also, Vince, playing a futuristic Dr Jekyll’s Mr. Hyde, shoots a phosphorescent drug from a high tech gun into the crowd of people, who eagerly swallow it. Finally, as this long act of debauchery reaches its long hoped for ending, Ari is shown giving away his male friend in a same-sex wedding in a Jewish-like ceremony while three little girl escorts, as well as Vince and his entourage, cheer them on during the event.

With movies like ENTOURAGE as a symbol of American culture, it’s not hard to see why America has an $18 trillion debt, national security is in peril, the world is in flames, and all of our major institutions are slowly crumbling into dust.