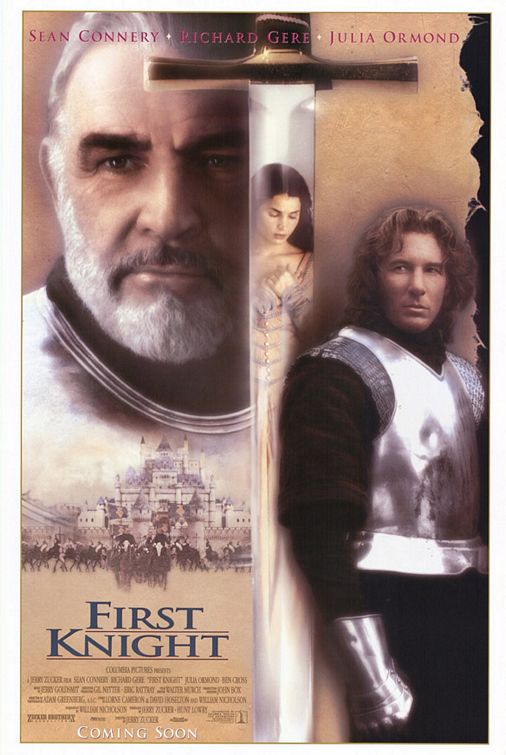 Written by William Nicholson, the same man who penned SHADOWLANDS, FIRST KNIGHT presents a biblical and noble spin on the age old tale of King Arthur, Lady Guinevere, Lancelot, and the knights of the round table. Tasteful direction of war, no nudity nor profane language, and a biblical and moral treatment of issues of war, love and forgiveness make this film a must see for those who want their values affirmed and for those who yet need to learn some values.

Written by the same man who penned SHADOWLANDS, FIRST KNIGHT presents a noble spin on the tale of King Arthur and his knights of the round table. Ben Cross plays Malagant, a knight who chooses to usurp the reign of good King Arthur (Sean Connery). Richard Gere plays Lancelot as a romantic loner who travels about as a vagabond in search of adventures, including wooing Lady Guinevere (played by the beautiful Julia Ormond). Guinevere rejects Lancelot and marries King Arthur. Arthur calls the knights together to have a peace talk with Malagant. Malagant kidnaps Guinevere. Lancelot rescues Guinevere and again tells her of his love. On their return to Camelot, Lancelot kisses Guinevere goodbye and is discovered by the king, who almost condems them for treason but doesn’t carry out a judgement when Lancelot again comes to the rescue at a final confrontation with Malagant.

FIRST KNIGHT demonstrates integrity and truth. King Arthur realizes that God is the King of Kings and true leadership means serving God. Guinevere realizes that even unfortunate circumstances can be used for the glory of God. And, Lancelot learns true servtude. No nudity or profane language and a moral treatment of issues of war, love and forgiveness make this movie a must see for those who want their values affirmed and for those who yet need to learn some values.