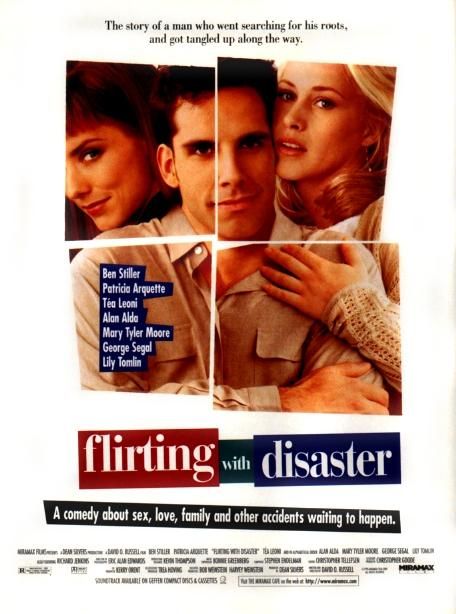 In, FLIRTING WITH DISASTER, adopted Mel Coplin searches for his birth parents in a frantic cross-country comedy. The movie explores the search for identity and the boundaries of sexual appropriateness within a group under stressful circumstances. Containing drug use, a homosexual relationship, adulterous intentions, and other objectionable material, it is a pagan look at a quest for identity that can only be found in Christ.

FLIRTING WITH DISASTER is a frantic cross-country comedy about a man searching for his real birth parents. Ben Stiller plays Mel Coplin, a young married scientist. Raised by his frantic adoptive parents, he sets out with his wife, Nancy, baby son and psychologist Tina Kalb in search of the missing link in his self-perception — his real parents. Tina’s mission is to record the event on videotape for her research. What promises to be a beautiful experience quickly turns into a zany mess. First, Tina takes Mel to the wrong woman. Then, she takes him to the wrong man. Then, a homosexual couple tag along, but one of them attempts to seduce his wife Nancy. Finally, the craziness comes to a head when Mel discovers that his real parents are acid-dropping hippies.

Nearly every adopted person at some point in their life wants to know more information about their true parents. However, there is a desperate quality to Mel’s search for his birth parents. His need for a father’s love can not be not found in physical or temporal solutions. Containing drug use, a homosexual relationship, adulterous intentions, and other objectionable material, it is a pagan look at a quest for identity that can only be found in Christ.