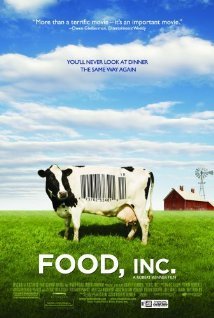 OOD, INC. is a documentary that explores how food is produced in our culture and the controversial role of big business in the food industry. It is divided into different sections presenting a different aspect of these issues. The movie’s thesis is that products grown locally and organically are better for you than those products mass-produced through advanced technology. The movie calls for better regulation of the food industry, including fast foods, but also encourages the production, distribution and consumption of organic and locally grown food products. Thus, it ends with a free market solution.

FOOD, INC. is not for the squeamish since it sometimes shows chickens and chicks killed and cows slaughtered. Also, it pays much attention to animal feces, especially in the beef section. The movie is somewhat politically correct. It never offers much of an opposing viewpoint or even mentions that tainted beef often is rendered safe with proper cooking. There are also at least five references to evolution. This strengthens the movie’s humanist worldview. FOOD, INC. is an eye-opening movie that will generate much discussion, but it merits extreme caution because of the problem areas just cited.

(HHH, EvEvEv, PCPC, AcapAcap, So, Co, CapCap, VV, MM) Very strong humanist worldview with numerous (at least five) references to evolution, plus strong politically correct elements that are anti-capitalist (especially against the fast food industry) and pro-socialist regulations with light Communist overtones as well as some pro-capitalist elements, however, promoting the increased production, distribution and consumption of healthier and organic foods from local sources; no foul language; some strong depictions of chickens and chicks being killed and cows being slaughtered; no sexual content; no nudity; no alcohol; no smoking or drugs; and, movie presents a lopsided view and alleges conflicts of interest.

FOOD, INC. is a documentary that explores the issues of how food is produced in our culture and the role of big business. The movie’s thesis is that products grown locally and organically are better for you than those that are mass-produced through advanced technology.

The movie is divided into different sections presenting a different aspect of the issue. The movie says that the fast food industry is the number one buyer of beef and therefore drives the market to have cheap prices. This in turn sets in motion a number of technology advances that increases production and lowers costs but allegedly has negative health and economic consequences.

One of the unintended consequences of this is potentially tainted meat. Different e. coli. problems are examined, and the movie follows the fight for “Kevin’s law” based on the death of a young child from eating tainted meat.

The abnormally high production of corn in America is discussed. According to the movie, political pressure and subsidies result in corn being bought for below the cost of production and therefore showing up in a range of products in the form of many names that is essentially corn syrup. Most cows are corn fed, which is cheaper than grass, but the movie claims it’s the corn in the cow that is producing the e.coli.

The filmmakers discuss potential conflict of interests by the federal regulatory arms such as the Federal Drug Administration and the Dept. of Agriculture, which are often run by former or future heads of agricultural businesses.

The production values for the movie are high, and it is well made. There are a number of charts and graphs shown to communicate their data. Those work well.

FOOD, INC.’s argues for increased regulation, especially on the collusion between the agriculture business and government, but also says that consumers can influence how food should be produced and for what price it should be sold. At the end, the movie encourages organic and locally grown food products and highlights the fact that Wal-Mart, the one-time enemy of the organic foods industry, has begun to stock organic food because of customer demand. Some critics argue, however, that organic food production will not be able to meet the world population’s increasing demand for food.

FOOD, INC. is not for the squeamish in that it sometimes shows chickens and chicks killed and cows slaughtered. Also, it pays much attention to animal feces, especially in the beef section.

In addition, the filmmakers never offer an opposing viewpoint. Nor do they mention that tainted beef often is rendered safe with proper cooking. Another criticism of the movie is that it calls for more government regulation but fails to note that the farm subsidies for corn and the collusion between big business and government which it complains about are both the result of the government regulating America’s food production and marketing. Also, if all of the modern processed food is really so bad for people, why are life spans in industrial nations like the U.S. still increasing? Despite these problems, the movie ends on a pro-capitalist note that encourages business to meet consumer demand for healthier and organic foods from local sources. Thus, it appears to support a free-market solution promoting the increased production, distribution and consumption of such food products.

Regrettably, the movie contains at least five references to evolution when on-camera experts describe what animals are supposed to eat. This strengthens the movie’s humanist worldview. What these experts don’t understand is that they are simply describing how God made man and animals, but they attribute that system to a mindless process called evolution, instead of a to personal, divine creator.

FOOD, INC. is an eye-opening movie that will generate much discussion, but it merits extreme caution because of its one-sided presentation and the somewhat graphic depiction of processing animals for food.