"Effective Spy Thriller, with a Twist" 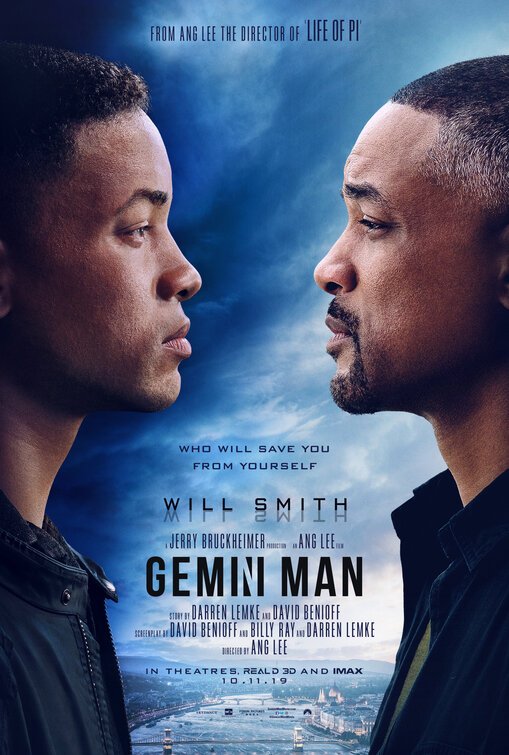 GEMINI MAN stars Will Smith as government assassin, Henry Brogan. After killing a supposed bio-terrorist, Henry retires. However, he’s attacked by assassins sent by the head of his agency. The director’s in cahoots with Clay Verris, a rogue military contractor who worked with Henry in the military. The man Henry killed wasn’t a terrorist, but a scientist helping Verris create an army of cloned soldiers. With help from a friend and a female spy, Henry escapes to Columbia, where he’s stalked by a mysterious assassin who knows his every move. Henry discovers that the assassin is a younger clone of himself, who’s been fed lies by Verris.

GEMINI MAN is an exciting spy thriller. A chase sequence involving motorcycles is a highlight but comes too early in the movie. The action scenes in the second half don’t seem as exiting. Also, some dialogue is a little corny. GEMINI MAN has a light moral worldview with strong patriotic elements. These positive elements are marred by strong foul language, a lot of violence and the theme about assassinating people. MOVIEGUIDE® advises extreme caution for GEMINI MAN.

(B, PP, LLL, VV, S, N, A, M):
Dominant Worldview and Other Worldview Content/Elements:
Light moral worldview, with strong Pro-American, patriotic elements, about government assassins and spies, cloning, and government corruption, but government service for America is eventually extolled, as is compassion, doing the right thing, and having the liberty to choose one’s vocation and one’s purpose in life, marred by assassination theme that slightly taints the movie’s positive ending
Foul Language:
About 24 obscenities (including one “f” word), five strong profanities, one light profanity
Violence:
Strong, often intense action violence with some bloody wounds but not extreme includes assassinations, attempted assassinations, intense gun fights, two men engage in an intense hand-to-hand combat sequence set in a European catacombs and burial site with many skulls piled up (set in Budapest), woman desperately fights a male assassin to the death, character shot in leg, a couple explosions, man on motorcycle tries to run over another man he’s chasing, villains shot dead, two bodies are tossed overboard into water by villains (the two people are killed off screen), lengthy motorcycle chase, etc.
Sex:
Light sexual comments, and man and woman in bikini are on boat together
Nudity:
Brief upper male nudity in a couple scenes
Alcohol Use:
Brief alcohol use
Smoking and/or Drug Use and Abuse:
No smoking or drugs; and,
Miscellaneous Immorality:
Cloning subplot, government corruption but rebuked and defeated, betrayal, an innocent man is wrongly assassinated but the evil plot is exposed.

GEMINI MAN stars Will Smith as a government assassin who uncovers and fights a rogue operation planning to create an amoral clone army without feelings and without any moral conscience. Some of the dialogue is a bit corny, but GEMINI MAN is an effective spy thriller with a science fiction twist that, nevertheless, warrants extreme caution because of strong foul language, violence and the movie’s assassination theme.

The movie opens with an American military sniper named Henry Brogan (Smith) assassinating a supposed bio-terrorist traveling on a high-speed train in Europe. After the successful mission, Henry tells his handler from the Defense Intelligence Agency (DIA) he’s decided to retire because he shot the man in the neck even though he was aiming for the man’s head. Henry feels lucky that his shot didn’t go further off track and hit an innocent passenger, like the little girl across the aisle from the intended victim. He feels he’s losing his touch, including his concentration, and should retire.

Henry’s handler reluctantly agrees to Henry’s retirement, but Henry soon finds himself attacked by a team of assassins sent by the head of the DIA. The director’s in cahoots with Clay Verris, a rogue military contractor who once worked with Henry in the military. The man Henry shot on the train wasn’t really a bio-terrorist. He was an expert in cloning and has been helping Verris create an army of clone soldiers. The scientist betrayed Verris when Verris decided to manipulate the clone army’s DNA not only to make the soldiers pain free but also to eliminate any moral decision-making abilities in them. Creating soldiers without a moral conscience isn’t a good idea.

With help from a friend and a female spy assigned to watch him, Henry escapes to Columbia, where he finds himself stalked by a mysterious assassin who knows his every move. Henry discovers the assassin is a younger clone of himself, who’s been fed a bunch of lies about Henry from Verris.

GEMINI MAN is an exciting, vigorous spy thriller. It starts with a suspenseful sequence and barely lets up after that. A chase sequence involving motorcycles in the streets of Columbia is the highlight of the action, but it comes a little too early in the movie. The action scenes in the movie’s second half don’t seem as exiting. Also, some of the dialogue involving confrontations between the good guys and the bad guys are a little corny.

That said, GEMINI MAN has a light moral worldview with strong patriotic elements. Although the heroes are up against government corruption, the movie extols the idea of being an American patriot. Thus, at the end of the movie, the female American agent helping Henry returns to government service. GEMINI MAN also promotes doing the right thing and having the liberty to choose one’s vocation and purpose in life.

These positive elements are marred, however, by strong foul language, a lot of violence involving guns and the movie’s theme about assassinating bad guys. Consequently, MOVIEGUIDE® advises extreme caution for GEMINI MAN.