GLASS ONION: A KNIVES OUT MYSTERY

"Peel Back the Layers" 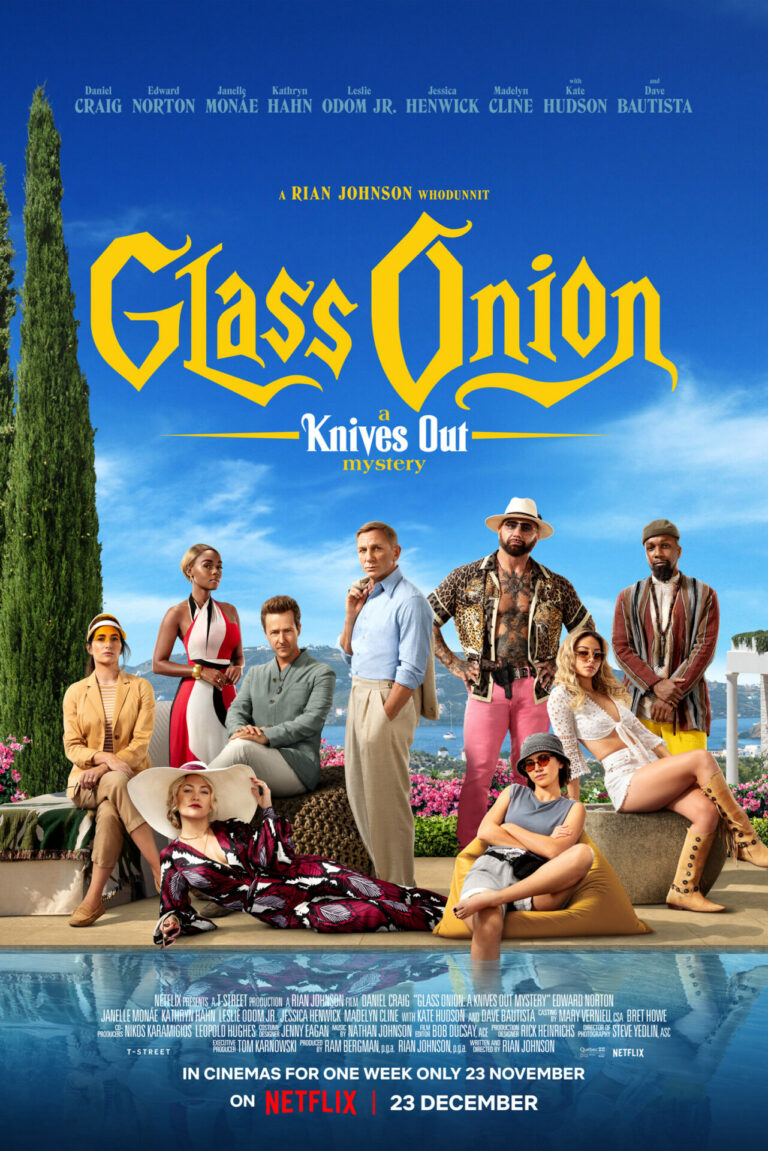 GLASS ONION is a sequel to KNIVES OUT, following the famous Southern detective, Benoit Blanc (Daniel Craig) as he searches for a new case. When a mysterious wooden puzzle box shows up on his doorstep, Blanc finds an invitation to a party and travels to Greece.  The exclusive party is a murder mystery party at the home of billionaire Miles Bron. Blanc, along with an eclectic group of characters arrive at the island to take part in Bron’s meticulously planned murder mystery. However, upon his arrival Blanc learns that he was never invited to the party. Bron welcomes him nonetheless, and the mystery unfolds.

GLASS ONION is a masterfully crafted mystery that keeps the audience guessing with every layer that is peeled back. The performances are gripping, led by a hilarious performance once again from Craig. The movie plays on the tropes of classic mystery, detective novels, games, and movies, while also bringing a fresh and inspired story that is sure to keep the viewer on their toes and at the edge of their seats. Despite its captivating execution, Movieguide® advises strong caution for younger audiences due to foul language, some violence and some suggestive elements.

(B, PC, LL, VV, AAA, N, S, M):
Dominant Worldview and Other Worldview Content/Elements:
Mild moral worldview about bringing evil to justice mixed with some PC elements about wealth and capitalism
Foul Language:
Brief strong foul language, two uses of the f-word, along with uses of the s-word, b-word, and mild obscenities like d*mn and h*ll
Violence:
a character is shot, another is poisoned, someone is almost hit while driving, a character appears to have committed suicide Alcohol Use/Abuse: excessive alcohol throughout, constant drinking that results in several characters getting drunk
Nudity:
several characters wear revealing swimsuits, a man wears a speedo, and some of the female characters wear skimpy bikinis;
Sex:
No sex, however, one character appears to have an affair, and there is a suggestive scene where two characters are in bed, no full nudity is shown Smoking and/or Drug Use and Abuse;
Miscellaneous Immorality:
one character constantly battles getting canceled for past racist comments and knowingly using a sweatshop for her brand of clothing

GLASS ONION is a sequel mystery to KNIVES OUT with a new cast of eccentric characters. Returning to the big screen is the witty, southern detective, Benoit Blanc, who desperately wants another challenging case.

When a mysterious wooden puzzle box arrives at his door, Blanc can’t help but entertain his curiosity and discovers that he has been invited to an exclusive party with billionaire Miles Bron, who lives on an island off the coast of Greece. Blanc, along with a group of Bron’s closest friends arrive on the island and discover that Bron has planned a murder mystery for them to solve while they are there.

Blanc is confused to find out that Bron never actually invited him to the party. However, Bron is excited to have the world’s greatest detective at his murder mystery party and welcomes him into the exclusive and tight-knit friend group.

Eyebrows are raised, however, after Bron’s ex business partner, Andi Brand, arrives at the island. Bron recently cut ties with Brand after a falling out over one of Bron’s latest business ventures. While her arrival is shocking, Bron is happy that she decided to come despite her recent exit from both the company and their friend group.

Aside from Blanc, the group of friends go about once a year to Bron’s house to celebrate his success. Duke Cody is a male-rights activist and Twitch streamer who comes to the island with his girlfriend, Whiskey. Also invited is politician Claire Debella, one of Bron’s lead researchers and employees, Lionel Toussaint, as well as washed-up model Birdie Jay along with her assistant Peg.

The lifelong group of friends wonder why Andi would ever show up to the house of the man who destroyed her chances of taking part in his fortune. However, they also want to know why the first-time guest—and the world’s greatest detective—received an invitation. Although Bron accepts all the surprises in stride, his murder mystery party takes a striking turn.

Mystery and chaos abound in Rian Johnson’s second installation into the KNIVES OUT mystery franchise. The audience will be engaged and guessing with every layer that is peeled back. The performances are gripping all-around, led by a standout and hilarious performance once again from Craig. The movie plays on the tropes of classic mystery, detective novels, games and movies, while also bringing a fresh and inspired story that is sure to keep the viewer on their toes and at the edge of their seats. Despite its captivating execution, Movieguide® advises strong caution for younger audiences due to foul language, some violence, and some suggestive elements.