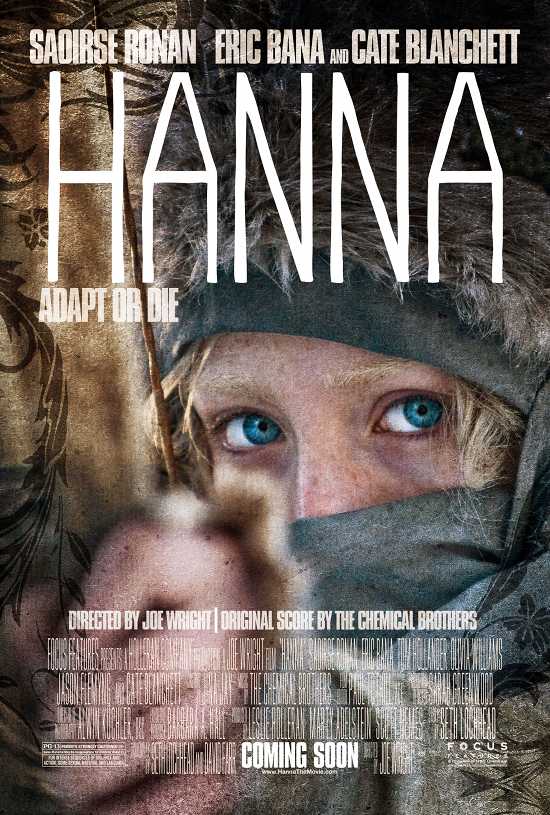 HANNA starts off promising enough, but then drops the ball in the second half. The ending also turns out to be depressing, annoying and repetitive. In the story, a father and his daughter hide from a CIA team, led by a Southern Belle named Marissa. The father trains his daughter to be a lethal killer. Then, he splits for a rendezvous in Berlin while Hanna is sent into the dragon’s lair to assassinate Marissa. Hanna kills an imposter, however, but escapes into the Moroccan desert. Thinking she has killed the real Marissa, Hanna hides with an English family going into Spain on her way to Berlin. Meanwhile, Marissa sends two groups of assassins to hunt down Hanna and her father.

When the reason Marissa is trying to kill Erik and Hanna is revealed, it turns out to be a rather mundane, uninteresting reason that’s been done better in other movies. The reason also leads to a depressing, violent ending that still leaves viewers wondering why. Thus, the ending leaves viewers hanging and also contains bizarre quirky music that’s annoying. HANNA is the kind of spy thriller that needs a major rewrite.

(HH, B, C, APAP, Ho, LL, VVV, S, N, D, M) Strong kill-or-be-killed humanist worldview with some moral elements of father trying to protect his daughter from assassins, but this truth is not what it seems and the story’s resolution is depressing, one guard hides and prays, “Lord help me,” and he survives, strong Anti-American content as CIA is the enemy, and new teenage friend of teenage heroine ponders becoming a lesbian and later the two girls talk in camper under covers and one kisses the other before she leaves; nine obscenities (including two “f” words), one strong profanity and two light profanities; some very strong violence includes deer shot with arrow then gun, men killed, man tortured, teenage girl snaps woman’s neck, chase scenes, fighting, gun battle, men fight using martial arts, assassins, car crashes after woman fires into car, character shot with arrow and then gun, assassin killed with a pipe to his chest, another character shot to death; no sex scenes but teenage girls makes a silly comment about perhaps becoming a lesbian; upper male nudity; no alcohol; smoking; and, CIA leader seems to be corrupt and keeps subordinates in the dark, “father” instructs daughter in lethal ways of killing so she can assassinate her enemy before the enemy kills her (reasons are later revealed but they don’t make much sense), and heroine sneaks across border by hiding in family’s van but not telling them.

HANNA starts off promising enough holding one’s attention, but then drops the ball in the second half. The ending turns out to be depressing and repetitive.

The movie opens up with Hanna, a teenage girl living in a snowbound cabin in the forest, wounding a deer with an arrow, then shooting it. Soon, it’s revealed that her father, Erik, is training her for something big while they hide out from the authorities. The authorities turn out to be a CIA team, led by a redheaded Southern Belle named Marissa Wiegler.

Finally, Hanna tells Erik that she’s ready to leave, and she turns in a switch that will reveal her whereabouts. As Hanna waits for the CIA team to appear, Erik puts on a suit and walks away, apparently back to civilization. When the CIA team appears, Hanna kills a few of them, then waits for capture.

After capturing Hanna, the CIA puts her into an underground cell. Hanna asks to speak to Melissa, but the CIA sends in an imposter. Thinking that the imposter is really Melissa, however, Hanna, kills her, then shoots her way out of the cell. A chase scene ensues, with Hanna leaving the underground facility and finding herself in the Moroccan desert. Thinking that Melissa is dead, Hanna hides out with an English family, including another girl her age with whom Hanna becomes friends.

Meanwhile, Melissa sends a team of assassins after her while Erik makes his way to the Berlin rendezvous he set up with Hanna before they parted. Likewise, Hanna tries to make her way to Berlin as she crosses into Spain with the English family.

The question arises, Why does Melissa want Hanna and Erik dead? And, what kind of person has Erik created in his daughter?

Regrettably, the answer that comes with these questions turns out to be rather mundane and uninteresting. The answer also leads to a depressing, violent ending that leaves more questions. Also, at one point, Melissa captures the English family and tries to grill them about where Hanna was headed, but the movie never tells us what happens after that to this family. Finally, the movie’s ending and resolution also contains annoying drumbeat music followed by a quirky pop song that makes no sense.

HANNA’s director, Joe Wright, burst on the scene in 2005 with the MOVIEGUIDE® Award winning PRIDE & PREJUDICE. He’s gone pretty much downhill since then by creating quirky, mostly unappealing movies like ATONEMENT, THE SOLOIST and now HANNA. Quirky movies seldom work, especially if you don’t offer something more uplifting and wholesome to moviegoers that either can drive them to tears, inspire them with true heroism or integrity, and/or bring them to real joy or laughter. Movies like ATONEMENT or HANNA may please secular critics or one’s closest friends, but the mainstream audience will reject them – and for good reason!