HOW TO EAT FRIED WORMS 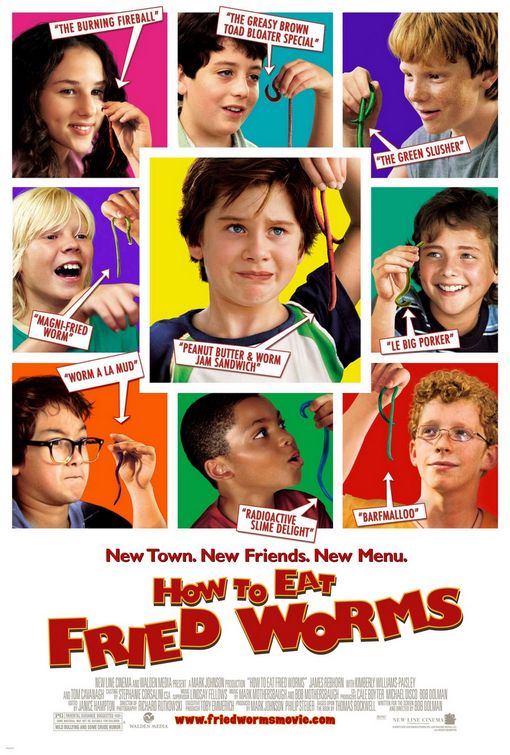 HOW TO EAT FRIED WORMS is a quirky, but highly entertaining, family comedy about standing up to bullies and doing the right thing. Billy Forrester, 11, has a weak stomach. The bully at his new school, Joe, and his gang put worms in Billy's thermos and start calling him "Wormboy." Billy brags that he likes to eat worms and can eat 10 worms at once. Joe challenges him to a bet, that Billy can't eat ten worms in one day without getting sick. Billy decides to take the bet, win or lose. The only trouble is, Joe sets the rules. He and his friends will prepare the worms for Billy to eat. They create all kinds of gross recipes to make Billy sick.

HOW TO EAT FRIED WORMS is hilarious. The child actors are a delight. They get excellent support from several adult actors. Best of all, the movie has some very strong, positive messages. Billy's father gives him wise advice about doing the right thing and trying to make friends with people, which Billy follows pretty well. Also, the movie sends a strong message about standing up to bullies and forgiveness.

(BBB, C, L, V, M) Very strong moral worldview with some redemptive content about standing up to bullies, courage, doing the right thing, telling the truth, being honest, making friends, positive parental figures, and forgiveness; one child says "butt," another child says he has to "poop," one child says "My God," implied references and talk about vomiting, and boys laugh repeatedly about a biology diagram of a worm that points out the worm's "sphincter"; some comical and slapstick violence, including boy throws worm at bully and it lands on his cheek, boys fall off bicycles, woman chases boys who enter her bait and tackle store while she's gone, some slapstick humor on a tennis court with man getting accidentally hit, worms are cooked, one worm is obliterated in a microwave oven and the shot is repeated after the end credits, people eat worms, some hitting, and boys put worms down their pants; no sex; no nudity; no alcohol; no smoking; and, boy bets he can eat 10 worms in one day, name-calling, students call principal a name behind his back, and bullying and cheating are rebuked in a positive way, with courage, truth and forgiveness.

HOW TO EAT FRIED WORMS is a quirky, but highly entertaining, family comedy about standing up to bullies and doing the right thing.

Billy Forrester, 11, has a weak stomach and can’t stand his little brother, Woody, who’s always showing off and messily eating gross-looking food. Billy’s father, Mitch, gets a new job and moves the family to a new place, including going to new schools. Woody fits right into the new school, but, at Billy’s school, the school bully, Joe Guire, gets all the boys to start picking on him. Billy’s only friends are a tall, lanky girl named Erica and a nerdy boy, Adam, who Joe has sentenced to death with his “Death Ring” (that’s okay, Adam tells Billy, because Joe says the slow-acting poison in his ring will not kill Adam until the 8th grade).

The first day of school, Joe and his cronies put worms into Billy’s thermos bottle. Billy tells Joe he likes to eat worms and throws one of the worms at Joe, where it lands on Joe’s cheek. Joe starts calling Billy “Wormboy,” and the nickname sticks. Erica, however, is happy that, for the first time, someone at school stood up to Joe. Later, Joe and his buddies follow Billy home, shouting, “Wormboy.” Angry, Billy brags that he can eat 10 worms at once. Joe calls Billy’s bluff, and Billy agrees to eat 10 worms in one whole day by 7 p.m. on Saturday, without vomiting.

Erica tells Billy to stick to the bet, win or lose. Joe, however, sets the rules. Benjy, his right-hand man, serves as the official worm cooker. He gives newly created recipes unique names like “The Barfmallow” and “Radioactive Slime Delight.” In one dish, Benjy puts lots of hot Tobasco sauce. Billy learns that his stomach is not so weak after all, but when his parents bring home Oriental noodles for an early dinner, Billy’s constitution is tested beyond all reason.

HOW TO EAT FRIED WORMS is hilarious. The child actors are a delight. Each one has funny character traits that makes them stand out. Luke Benward is perfectly cast as Billy, and Hallie Kate Eisenberg does a great job as Erica, the girl who is wise beyond her years. Tom Cavanaugh and Kimberly Williams-Paisley are also excellent as Billy and Woody’s caring parents.

Best of all, the movie has some very strong, positive messages. Billy’s father gives him wise advice about doing the right thing and trying to make friends with people, which Billy tries to follow. Also, the movie sends a strong message about standing up to bullies and forgiveness. Billy uses courage, forgiveness and honesty to ultimately defeat the bully and win new friends.

Rent or Buy HOW TO EAT FRIED WORMS: