"Everyone Has a Purpose" 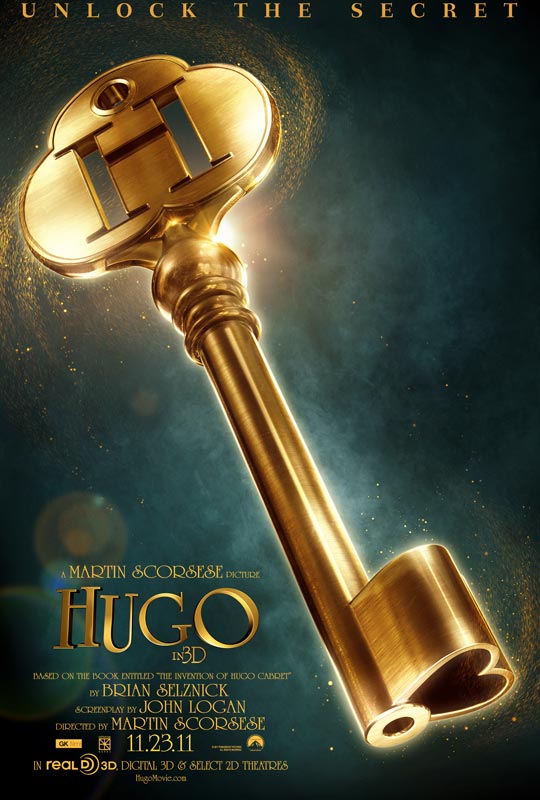 HUGO follows the story of a young boy named Hugo, who secretly lives in the train station of Paris in 1930. Recently orphaned, Hugo’s uncle forces him to quit school and work running the train station’s giant, elaborate clocks. When his uncle suddenly disappears, Hugo has to fend for himself. A chain of events leads to Hugo befriending Isabelle, another orphan who lives with her godparents. Isabelle’s godfather, Georges, runs the little toy repair shop in the train station. Hugo and Isabelle unlock a secret from her godfather’s past. The secret will not only transform them, but everyone around them, including Isabelle’s godfather and the mean train station guard.

HUGO has a richly complex story about intelligent design. It’s filled with a childlike sense of wonder, adventure, comedy, a moving score, and beautiful images. The movie extols kindness, finding one’s purpose and gifts in life, forgiveness, and honoring the past, but God is reflected in the argument by design and the iconography. Also, there’s some stealing and lying, which is rebuked, and a few scary moments. MOVIEGUIDE® advises caution for young children, but HUGO otherwise is a delightful, uplifting movie.

(CC, BBB, Pa, V, AA, D, M) Strong Christian worldview presenting the teleological intelligent design argument in an imaginative story with requests for prayer, crucifix above the bed of Georges Méliès as well as other prominent crosses, statues of angels, monks and bishops, battles between heaven and hell, and Hugo discerns that every thing is designed with a purpose so each person must be designed with a purpose and so you need to find your purpose in the designed world with very strong moral elements extolling kindness, finding one’s purpose and gifts in life, forgiveness, and honoring the past, yet God is implicit and not explicit, and there are pagan stories in Méliès’ movies such as Greek and Middle Eastern mythology; no foul language; violence includes boy runs away from train station guard who runs into people as he chases boy, the guard’s dog also chasses the boy, two slightly scary dream sequences, a runaway train crashes into a train station in one dream sequences, two characters hang precariously on large clocks while grasping the minute hands, boy is twice threatened with being run over by a train, and a fireball is seen approaching one man, and it’s said that he died from this, a body is found in the river but nothing gruesome shown, and some light comical violence in films shown and during filming of movie scenes; no sex but young teenagers hold hands and girl gives boy a kiss on his cheek; no nudity; protagonist’s uncle shows up drunk after boy’s father dies and his drunkenness is mentioned later; brief smoking; and, boy steals mechanical parts form shop owner but owner makes him work to pay off his crimes after he’s caught, orphaned boy abandoned by his only remaining relative keeps that a secret out of fear of being sent to an orphanage and steals food to survive, guard threatens children with sending them to an orphanage, guard exaggerates crimes of an orphan when he’s on the phone, lying, and some brief discussion about whether a minor character’s pregnant wife is really carrying his baby.

HUGO is a high-quality movie designed for families but also destined to please older movie fans. HUGO has a strong Christian worldview presenting the teleological intelligent design argument in an imaginative story wherein Hugo discerns that every thing is designed with a purpose, so each person must be designed with a purpose by the Designer.

HUGO is a beautiful work of art, the first 3D film to be crafted by one of today’s most acclaimed modern directors, Martin Scorsese. It marks a tremendous change of pace for Scorsese, who’s built much of his career on violent crime and revenge movies. It’s also the first 3D film to be released by America’s current crop of elder statesmen of filmmakers that includes Steven Spielberg, George Lucas, and Brian DePalma, who became famous at about the same time Scorsese did, in the 1970s.

HUGO follows the story of a young teenage boy named Hugo (played by Asa Butterfield), who secretly lives in the train station of Paris, France in 1930. His mother died a long time ago, leaving him to be raised by his inventor father (Jude Law), who’s working on an abandoned, broken automaton robot that can write when it’s wound up. One day, however, the father sees a tremendous fireball approaching him that consumes him off screen. Now orphaned, Hugo is taken under the wing of his alcoholic uncle, who forces him to quit school and learn to work running the Paris train station’s giant and elaborate clocks.

When his uncle suddenly disappears, Hugo is left to fend for himself. He relies on stolen food from the vendors to stay alive. When the movie opens, Hugo’s caught trying to steal a mechanical mouse from an old man named Georges (Ben Kingsley), who runs a watch and toy repair shop in the train station. The old man takes away his beloved father’s journal showing the mechanical man and threatens to burn it at his home. Hugo follows Georges there and winds up befriending a fellow orphan girl, Isabelle (Chloe Grace Moretz), who’s being raised by Georges and his wife, her godparents. It’s about this point that the movie reveals Hugo was stealing the parts from Georges to fix up the mechanical man his father was fixing.

Georges wants Hugo to believe he destroyed Hugo’s beloved journal, but Isabelle reveals that Georges didn’t really burn it. She advises Hugo to befriend her uncle and maybe he will return it to Hugo. He tries this, and Georges tells Hugo to help him in his shop. When Georges feels Hugo has paid for the things he stole, he will return the journal.

Meanwhile, Hugo and Isabelle become fast friends. She takes him to her favorite bookstore and reveals to Hugo her love for books. Also, Hugo shares his love for movies with Isabelle.

One day, Hugo discovers that Isabelle is carrying a heart-shaped key that just might be the key that winds up the mechanical man. Hugo tells Isabelle that he thinks the robot may reveal a message from his father before he died. They try the key. At first, they’re disappointed as the robot just produces a cryptic group of squiggles. Soon, however, the robot is writing again. Instead of writing a message, the robot draws a picture of the man in the moon with a small rocket in its eye. The picture is similar to a scene from an old, obscure movie Hugo’s father mentioned. After the robot draws the pictures, it writes the name Georges Méliès at the bottom. That turns out to be Isabelle’s godfather’s name.

Hugo and Isabelle show the picture to her godmother, but the godmother tells them not to show it to Georges. The past is too painful for him, she says. Of course, Hugo and Isabelle can’t take no for an answer. They go on a quest to find out what happened. The secrets they unlock will not only transform them, but everyone around them, including Isabelle’s godfather and the mean train station police guard.

HUGO has a richly complex story, filled with a childlike sense of wonder, adventure, comedy, a moving score, and beautiful images. The 3D effects are some of the richest yet used. One funny shot has the station guard and Doberman Pincher peering out into the audience. Scorsese manages to keep the story’s humanity front and center, drawing moving performances from a great cast while teaching a message of forgiveness and redemption, albeit of the secular earthbound kind, as Hugo and Isabelle find their purpose by helping Georges and other characters rediscover their purpose.

While Hugo and Georges initially argue a lot, they ultimately establish a bond of friendship and respect that deepens into familial love. In trying to redeem the past, Hugo learns to respect Georges, showing the value of respecting one’s elders and putting yourself in danger to make others happy. Also, the girl inspires Hugo to renew his interest in books. The movie extols their passion for learning and solving life’s mysteries. Finally, leave it to Martin Scorsese, whose interest in film preservation is well known, to make his first of hopefully other family movies that has a strong sense of respect for film history. In that respect, HUGO is a moving homage to cinema, and the magic, imagination, and joy it can bring.

Scorsese also takes viewers on a journey through early movie history. Viewers will discover the energy and imagination with which some of the first movies in history were made. We discover how much Scorsese himself believes that filmmaking and dream making go hand in hand. He creates a visually magnificent adventure that honors the dreams of every character.

HUGO is beautifully done and has a wonderful ending that will move many to tears. That said, the movie might hold limited appeal for most modern young audiences, due to its historic setting and the esoteric nature of the heroic quest that takes up the story. In addition, the young leads challenge each other in conversation to outsmart one another with difficult words. This may bore younger children, but will delight some older ones. There are also a couple scary dream sequences in HUGO, so MOVIEGUIDE® advises caution for younger children.

Ultimately, HUGO is a story grounded in wounded characters. However, it embraces life, healing, purpose, and possibility – the stuff that dreams are made of, as Shakespeare wrote.

The movie wonderfully presents the Christian teleological intelligent design argument in an imaginative story. There are requests for prayer, the crucifix above the bed of Georges Méliès as well as other prominent crosses, statues of angels, monks and bishops, and battles between heaven and hell. Hugo discerns that everything is designed with a purpose so each person must be designed with a purpose. So, as Christians know from Scripture, Hugo realizes that you need to find your purpose in the designed world. Even so, God is implicit and not explicit except through the visual icons, prayers and teleological argument. Also, there are hints of pagan stories in Méliès’ movies such as Greek and Middle Eastern mythology. Finally, there are strong moral redemptive elements extolling kindness, finding one’s purpose and gifts in life, forgiveness, and honoring the past.

One other thing, which cannot be left out, is the sheer aesthetic beauty that Scorsese has placed on the screen. If nothing else, this movie visually embraces the audience. The amber blue color pallet, the swirling train station steam, and the constant snowfall all set the tone for the movie…and that is only the beginning. It’s a 3D experience you might not want to miss.