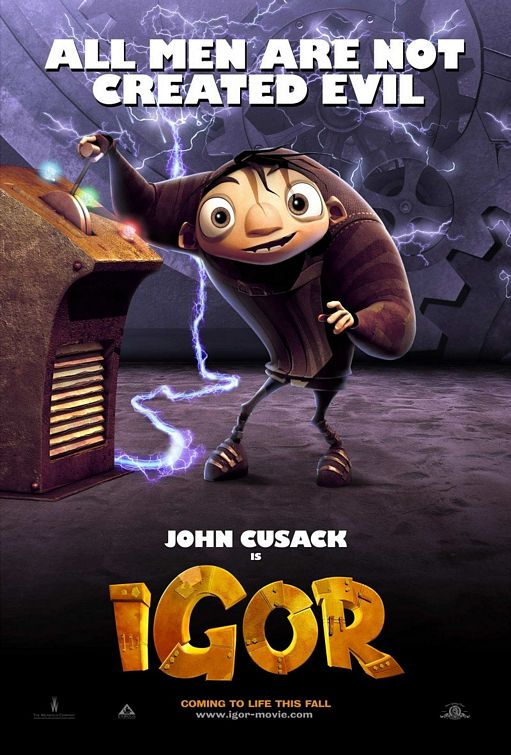 IGOR is the animated story of a lowly assistant to a mad scientist who longs to be a recognized scientist in his own right. Igor’s master dies in a freak accident. So, Igor decides to enter the annual Evil Invention Contest with his own creation, a huge monster named Eva. Things don’t go well because the “evil bone” in Eva did not get activated. Eva inadvertently is brainwashed not for evil, but rather to be an actress. Though Eva is huge and strong, she is kind hearted and so won’t be a winner in the Evil Invention contest. Igor tricks her into thinking the contest is an audition.

IGOR is an amusing animated movie but with no laugh-out-loud moments. The story is sometimes weak. The voices by well-known actors are competent. IGOR has strong moral themes of choosing to be kind instead of being evil. The main character chooses a relationship over winning a contest. There are, however, three light profanities in this children’s movie, along with some troubling themes of science creating life and an immortal character who comically tries to kill himself. MOVIEGUIDE® advises caution for younger children.

(BBB, C, Pa, L, V, MM) Very strong moral worldview with redemptive themes and a few pagan elements; one mild obscenity and three light profanities; cartoon fantasy violence but two characters are killed and one character, though immortal, continues to try to kill himself in humorous ways; no sexual scenes; female character has exaggerated cleavage; no alcohol; no smoking or drugs; and, lying, cheating, attempts to commit suicide, blackmail.

IGOR is the story of Igor, a lowly assistant to a mad scientist who longs to be a recognized scientist in his own right.

When Igor’s master dies in a freak accident, Igor decides to enter the annual Evil Invention Contest with his own creation, a huge monster named Eva. Things don’t go well for Igor because the “evil bone” in Eva did not get activated and she inadvertently was brainwashed not for evil, but rather to be an actress. Though Eva is huge and strong, she is kind hearted and so won’t be a winner in the Evil Invention contest. Igor tricks her into thinking that the contest is an audition.

However, evil Dr. Schadenfreude tricks Eva into leaving Igor just as Igor and Eva begin having feelings for each other. Dr. Schadenfreude is able to activate Eva’s “evil bone,” and she destroys the other inventions at the contest. However, Igor and his two friends Brain and Scamper, manage to save not only Eva but the whole town as well.

IGOR is amusing, but never laugh-out-loud funny. The gags are weak. The story takes a long time to get going, though the second half is much stronger than the first. The voices are good, though mostly generic, but there are well-known actors and actresses voicing them. The character design is very strong, and the movie has a unique look that sets it apart from other animated features.

The story has strong moral themes. The town has been tricked into thinking that, to be successful, you have to be evil. Igor learns and then teaches them that, in fact, you need to be kind to others. He says at the end that everyone has an “evil bone” but everyone has a choice whether to use it or not. Igor has to choose between relationship or winning the contest, and he chooses relationship. The bad guys lose, and the good guys win.

There are a few elements of concern. Igor, modeled on Dr. Frankenstein, has found a way to create life. He creates his friends Scamper and Brain. However, parents should reinforce to younger children that only God can create life.

Scamper was created with immortality. Because of his cynicism, he constantly tries to kill himself, but can’t die. In the end, this helps them win because he can’t be harmed when trying to stop the villain’s evil machine.

The use of three light profanities in a children’s movie is also disturbing. It would have been just as dramatic if the characters had said “Oh gosh!” instead. This was a poor choice by the filmmakers.

The other element that parents should be aware is that one of the female characters has been designed with exaggerated cleavage.

All in all, IGOR is an amusing story but there are concerns that require caution for younger children.