INTERVIEW WITH THE ASSASSIN

"The Art of Deception" 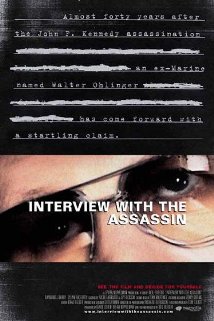 INTERVIEW WITH THE ASSASSIN is a staged documentary featuring former cameraman Ron following his terminally ill neighbor Walter who claims to be JFK’s assassin. As the documentary unfolds, clues are revealed as to the validity of Walter’s story. As the trail gets deeper, Walter’s statements seem to unravel right before Ron’s eyes. As Ron begins to question Walter’s truthfulness and even sanity, he realizes that he is in too deep. In the end, a surprising turn of events ensues which leaves the characters and the audience in a daze of suspense and disbelief.

Filmmaker Neil Burger uses the art of deception to take his characters and the audience to a surprise ending that leaves room to believe that the story is factual, with no indication that it is a fictional creation. The web of deception that Ron got caught up in is presented powerfully enough that it may trap the moviegoer. It may cause another version of history to be presented and believed without any shred of truth. While this movie may be attractive to mature audiences who desire a good original idea and plot line, they had better do their homework first

(RHRHRH, HH, LLL, V, MMM) Very strong revisionist history (it is the premise of the entire film) with little discretion as to what is truth and what is false with humanist elements regarding man’s ability to gain power and lack of remorse over killing (“killing someone is easy- it’s getting away that’s hard”); 32 obscenities (several very strong ones) & 9 profanities; brief scenes of violence, such as man (also a cop) assaulted in his home, implied murder (not shown) and one man killed due to gunshot (some blood), as well as more threats and discussion of violence (including recap of JFK’s assassination) than on-screen violence; guns are displayed throughout movie for both self-defense and killing; no nudity; no alcohol; no drug use or smoking; and, lying and deception are foundational to storyline (to the point that the audience can hardly differentiate what is the truth and what is fiction).

Since President John F. Kennedy’s assassination in 1963, conspiracy theories concerning his death have abounded, making this historic moment of American history a perpetual “who-done-it.” INTERVIEW WITH THE ASSASSIN lumps its theory of who killed JFK with the others in this clever and intriguing documentary-style flick written and directed by independent filmmaker Neil Burger.

Staged as a true documentary, the movie follows Ron Kobeleski (Dylan Haggerty), an unemployed cameraman who believes the claim of his neighbor Walter Ohlinger (Raymond Barry) that he shot and killed President Kennedy. A former Marine with terminal cancer and only a few months to live, Ohlinger claims to hold the key to finding out who was really behind JFK’s assassination.

Armed with a camera, Ron follows Walter to his old haunts and former Marine comrades in search of more clues to this national mystery. Fueled by a desire for money and fame, Ron puts his own money on the line to provide whatever Walter needs to dig up this 40-year-old mystery.

As the trail continues to grow, Ron and Walter fear for their lives. Ron even installs a multi-camera security system in his home to protect himself, his wife and young daughter. Despite the risk involved, Ron ventures out with Walter to find the elusive Seymour, Walter’s operative who knows who was behind Kennedy’s assassination. Ron even tells his wife that he is pursuing the story despite the danger to their family, because of the fame and money they could garner from the story once it breaks.

One of the most disturbing parts of the movie comes from Walter’s response to Ron’s questions about what it felt like to kill the President of the United States. Walter blankly responds, “You kill the most powerful man in the world — I guess that makes you the most powerful.” His disregard for human life is simply brushed off as he says, “I was trained to kill.” This lack of humanity and emotion slaps in the face of the sanctity of life and respect for authority. For those deeply affected by JFK’s assassination, these statements could be highly offensive and should provoke strong feelings among any Christian.

Yet, as the trail gets deeper, Walter’s statements seem to unravel right before Ron’s eyes. As Ron begins to question Walter’s truthfulness and even sanity, he realizes that he is in too deep. In the end, a surprising turn of events ensues that leaves the characters and the audience in a daze of wonderment and disbelief.

With catchy camerawork and a sly storyline, Neil Burger captures the audience in his web of a story. By the end, the audience members walk away questioning whether what they just saw really happened or not. Without additional knowledge, it would be easy to believe that this fictional story really did happen and was covered up just like the other Kennedy conspiracies. The web of deception that Ron got caught up in is presented powerfully enough that it may also trap the moviegoer. It may, in effect, be presenting another version of history to be believed without any shred of truth. Such deception is dangerous because it misleads the audience and leaves them without an answer, simply to ponder, and possibly repeat, false information. While this movie may be attractive to mature audiences who desire a good original idea and plot line, they, and the less discerning moviegoer, had better do their homework first.