"Come Together Right Now -- To Save the World" 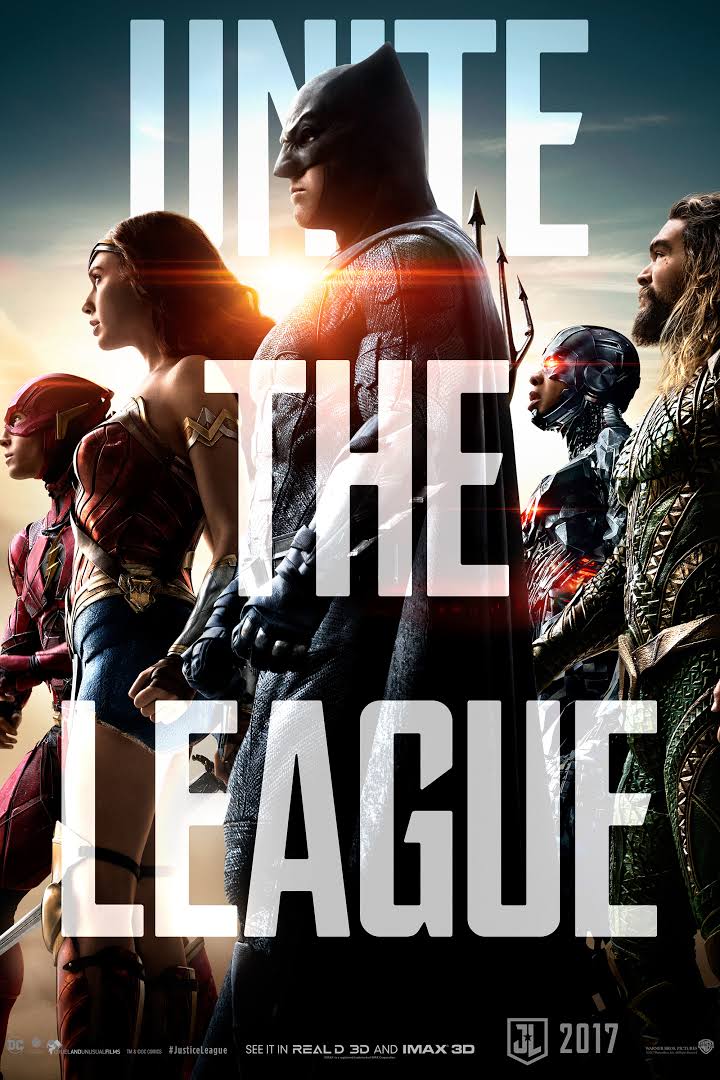 JUSTICE LEAGUE is a rousing, redemptive superhero story. The movie opens with the world missing Superman, who sacrificed himself for the world in the last movie. Batman and Wonder Woman are trying to gather a team of reluctant superheroes to stop an alien supervillain trying to recreate the world in his evil image. The supervillain, Steppenwolf, is searching for three hidden boxes with world-shattering power when united. Eventually, Batman decides to resurrect Superman to be victorious. However, his plan may backfire.

JUSTICE LEAGUE is better structured than recent superhero movies from DC Comics and Warner Bros. Pictures. It also has a lighter touch, which makes it more fun, more heroic and less dark and edgy. Finally, Batman and Superman are better developed, and Wonder Woman is a brilliant addition. Despite some foul language and brief negative content with some PC qualities, JUSTICE LEAGUE has an uplifting worldview with strong Christian, redemptive, moral themes, messages and motifs. Hope, truth, justice, and teamwork are extolled. The light they bring overcomes the villain’s demonic darkness. MOVIEGUIDE® commends JUSTICE LEAGUE but advises caution for older children.

Dominant Worldview and Other Worldview Content/Elements:
Very strong moral worldview with strong allegorical and metaphorical Christian, redemptive elements extols good overcoming demonic evil and family, major Christ-like character has died and is resurrected in a sequence involving symbolic water baptism and lightning, same character says “I believe in Truth; and, I’m a big fan of Justice,” light overcoming darkness is a motif, faith is extolled over humanist mockery, the demonic evil feeds on and destroys itself, good guys are battling a satanic villain who has demonic underlings serving his bidding, people talk about “saving” the world, etc., but there are some minor problems such as a hero makes an environmentalist comment in one scene about human beings destroying the planet and global warming, there are a couple pagan references to ancient “gods” who were destroyed, and there are two apparent Anti-Christian but ambiguous and confusing sentiments expressed by two villains (one villain about to blow up four city blocks in Gotham or Metropolis opens up the bomb briefcase and says, “Down with the modern world. Back to the Dark Ages and the safety of holy fear” but heroine says she’s a “believer” when villain asks her what she is, and the major demonic villain refers to three boxes with the metaphysical power to create and destroy as “three in one,” but this also could be seen as a demonic mockery of the Divine Christian Trinity and the power of the Triune God), plus Police Commissioner Gordon is a positive figure, and Bruce Wayne’s wealth is seen as an asset in the fight against evil.
Foul Language:
11 obscenities (a few “s” words and an SOB), one profane use of Jesus, one light profanity, and TV news report bleeps out “f” words used by a female eyewitness.
Violence:
Lots of strong, intense action violence involving scary creatures includes flying creatures have sharp-looking fangs as they attack people, villains and superheroes are knocked about and punched, characters knocked into many walls, Wonder Women uses sword against satanic villain and his demonic minions, satanic villain uses a large fiery ax, women on horseback are wounded, explosions, The Flash can knock people large distances with the flick of his hand or a kick, flying machines crash, hand to hand combat, heroes are put in perilous situations, Superman knocks Batman into the side of a police car, Aquaman holds off a wall of water, villain slams a female character against a wall, villain tries to choke a couple characters, etc.
Sex:
No sex scenes but Lois Lane looks over at an empty pillow where it’s implied the late Clark Kent used to sleep with her (she has an engagement ring from Clark/Superman, but apparently they didn’t get married yet).
Nudity:
Upper male nudity.
Alcohol Use:
Alcohol use includes Aquaman downing a bottle of whiskey.
Smoking and/or Drug Use and Abuse:
No smoking or drugs.
Miscellaneous Immorality:
Nothing else really objectionable.

JUSTICE LEAGUE is a rousing, redemptive superhero story about Batman and Wonder Woman gathering a team of superheroes to stop a demonic, alien supervillain trying to recreate the world in his image, but deciding they need to resurrect Superman to succeed. Despite brief story and content flaws, including some foul language, JUSTICE LEAGUE is one of the better, more uplifting DC Comics superhero movies from Warner Bros. recently. There are many Christian, redemptive allusions in the story, though not quite as strong perhaps as the previous MAN OF STEEL movie about Superman’s origins.

The movie opens with the world missing Superman, who sacrificed himself in the last movie, BATMAN V. SUPERMAN. Superman’s absence has emboldened the world’s villains, and things have gotten worse. In fact, Superman’s human mother, Martha Kent, had to sell the farm.

In the wake of the Man of Steel’s absence, Bruce Wayne, aka The Batman, has seen a new threat emerge: a string of attacks from flying demon-looking aliens with razor sharp teeth. Batman teams up with Wonder Woman to gather a team of superheroes to confront the threat.

Meanwhile, Wonder Woman receives word from the Amazons that an ancient, powerful box they were hiding has come back to life. Worse, the box’s re-awakening has brought back an old enemy, a satanic supervillain named Steppenwolf. Steppenwolf is apparently the leader of the demonic alien monsters. He has stolen the box that the Amazons have hidden for 5000 years and is looking for two more. When combined together, the three boxes can be used to remake the world in Steppenwolf’s own image.

Batman and Wonder Woman reach out to three superheroes, Aquaman, Cyborg and The Flash, to help them confront Steppenwolf and his minions. However, only The Flash (aka Barry Allen) agrees right away to help.

Eventually, Batman decides they also need to resurrect Superman using Cyborg and one of the two remaining hidden boxes. Cyborg is needed because it was Cyborg’s father who used the box to heal his son, who was disabled in a terrible accident. The problem is, Cyborg’s new mechanical half created by the box is still growing in power. Also, there’s a possibility the box’s power could destroy both Cyborg and Superman, or change Superman in bad ways not good ones.

JUSTICE LEAGUE is better structured than recent superhero movies from DC Comics and Warner Bros. Pictures, including MAN OF STEEL. It also has a lighter touch, which makes it more fun and less ponderous, dark and edgy. Ben Affleck as Batman and Henry Cavill as Superman are also better in this movie. In addition, Gal Gadot still makes Wonder Woman and her alter ego, Diana Prince, come alive, as she did earlier this year in the standalone WONDER WOMAN movie. As Barry Allen and The Flash, Ezra Miller is lots of fun. However, the dialogue for Cyborg and Aquaman isn’t as well written as the dialogue for The Flash, or for the minor superheroes in the Marvel movies being produced and released by Disney. Moreover, though the music is better here, it still has far to go before it meets the level of the music for Marvel’s recent THOR and GUARDIANS OF THE GALAXY movies.

JUSTICE LEAGUE has a strong moral worldview with strong Christian, redemptive themes, messages and motifs. For example, the movie extols good overcoming demonic evil and light overcoming darkness. It also extols family. Also, [POSSIBLE SPOILERS FOLLOW] Superman is resurrected in a sequence involving symbolic water baptism and lightning. At one point, Superman says, “I believe in Truth; and, I’m a big fan of Justice.” In other scenes, faith is extolled over humanist mockery, the demonic evil feeds on and destroys itself, good guys are battling a satanic villain who has demonic underlings serving his bidding, people talk about “saving” the world, and doubt about light or goodness overcoming darkness is overtly rejected.

That said, JUSTICE LEAGUE still has some gratuitous foul language and lots of intense action violence with scary villains. Also, in one scene, Bruce Wayne says that, since Superman died, men have been destroying the planet and causing global warming.

Finally, there are two moments that contain some offhanded Anti-Christian elements [SPOILERS FOLLOW].

In the first one, a minor villain trying to blow up four city blocks says, “Down with the modern world. Back to the Dark Ages and the safety of holy fear.” This is an oblique, false mockery of Christian history (in reality, there were no “Dark Ages”). Shortly thereafter, however, Wonder Woman makes sure the bomb explodes in the sky instead. The villain then asks her, “What are you?” “A believer,” she replies.

In the second one, Steppenwolf has finally gathered the three boxes of enormous power. The three boxes have the power to destroy the earth and create a new, darker one that Steppenwolf can rule. Although their power is described as alien technology, Steppenwolf calls them “The Unity.” He also makes a statement about them being so powerful because they are “three in one.” This dialogue would seem to mock the idea of the Christian Trinity. That said, the three boxes can also be seen as a kind of divine power from God that Steppenwolf, the demonic villain, is trying to use to elevate himself above God. Though this may be one way of looking at this dialogue, the dialogue still is a bit confusing, theologically and metaphysically speaking. With some minor tweaking, however, it could have been fixed.

All in all, MOVIEGUIDE® commends JUSTICE LEAGUE for its high quality, entertainment value and positive qualities. We advise caution, however, for older children.