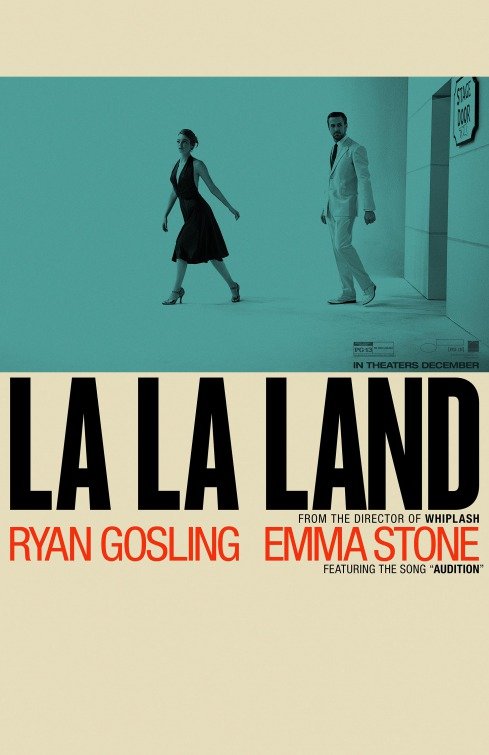 LA LA LAND is a musical about two dreamers in Los Angeles who fall in love. Sebastian and Mia cross paths, but they only show contempt. Played by Emma Stone, Mia is a wannabe actress working as a barista and auditioning for anything she can get. Ryan Gosling stars as Sebastian, a talented jazz pianist who can’t seem to hold a job because he doesn’t like his free musical spirit to be suppressed. After crossing paths enough times, the two start to fall in love. Even so, can they have a relationship and still pursue their dreams in show business?

LA LA LAND is a joy-filled homage to the Golden Age of Hollywood, as well as to the city of Los Angeles. The city provides a beautiful and sometimes barren backdrop to Mia and Sebastian’s romantic adventures. The movie asks viewers, How far should people go in pursuing their passions? As such, it warns viewers about the good things one can miss when one exchanges love for dreams. MOVIEGUIDE® advises caution for LA LA LAND due to some strong foul language.

(RoRo, B, C, LL, S, N, A) Moderate Romantic worldview about finding fulfillment in pursuing dreams, mitigated by light moral, redemptive elements showing the negative effect of putting one’s dreams above loving, personal relationships with other people and characters sometimes exhibit positive attributes such as selflessness, kindness and chivalry and, in the end, having a family is shown positively even if one is unsuccessful; seven obscenities (including one “f” word), eight profanities (including a few GD’s) and character uses the middle finger; no violence; implied co-habitation, unmarried couple sleeps in the same bed, and some kissing; upper male nudity, and women in bathing suits; light alcohol drinking; no smoking or drugs; and, nothing else objectionable.

LA LA LAND is a musical with romance, drama and comedy about two dreamers in Los Angeles who fall in love.

Beginning with a stunning opening musical number set in rush hour traffic on the 105 in Los Angeles, Sebastian and Mia cross paths with each other, but only display contempt. Mia (Emma Stone) is a wannabe actress working as a barista and auditioning for anything she can get. Sebastian (Ryan Gosling) is a talented jazz pianist, who can’t seem to hold a gig because he doesn’t like his free musical spirit to be suppressed.

One particular night at a restaurant, Sebastian goes off the set of Christmas songs given to him and plays a beautiful jazz piece instead. This gets him fired, but it catches the eye of Mia who happened to be passing and found his playing mesmerizing.

Mia and Sebastian run into each other again at another party. Even though their personalities clash, a chemistry between the two keeps bringing them together. As the season passes, Mia and Sebastian fall in love. However, their pursuit of their dreams begins to get in the way of their relationship. So, in between the songs and dances, they must decide what’s truly important for them.

LA LA LAND is a homage to the Golden Age of Hollywood, as well as to the city of Los Angeles itself, which plays the beautiful and baron backdrop of the leads dalliance. Stone and Gosling show strength in their performances, though the two are more talented dancers than they are vocalists. The movie’s a tribute to classics such as SINGIN’ IN THE RAIN, TOP HAT and other colorful musicals such as THE UMBRELLAS OF CHERBOURG and A ROOM IN TOWN. Director/Writer Damien Chazelle of WHIPLASH shows incredible aptitude given this is only his second feature he’s directed. Vibrant colors and exquisite cinematography makes LA LA LAND perfect eye candy. The score sounds beautiful, and the dancing is impressive.

LA LA LAND addresses the common theme that many dreamers face: How far should people go in pursuing their passions? In the case of Mia and Sebastian, there’s ample warning in the movie about the good things one can miss if one exchanges love for dreams. Both love and dreams can be compromised if you’re not careful. However, once you’ve made a decision, you have to live with that decision, for better or worse.

The movie’s worldview leans toward Romanticism, but the movie has some moral moments that mitigate this problem. Sebastian’s criticism of LA culture is that it “worships everything, but loves nothing.” Though his own character’s flawed, Sebastian shows refreshing selflessness towards Mia, putting her dreams and pursuits even above himself and encouraging her all the way. Mia isn’t without her positive attributes either. She puts her everything into being a successful, good artist.

LA LA LAND is a joy-filled tribute to old-time Hollywood movies with a semblance of innocence, but the filmmakers could have done without the several strong obscenities and profanities inserted into the dialogue. MOVIEGUIDE® advises caution for older children and adults.