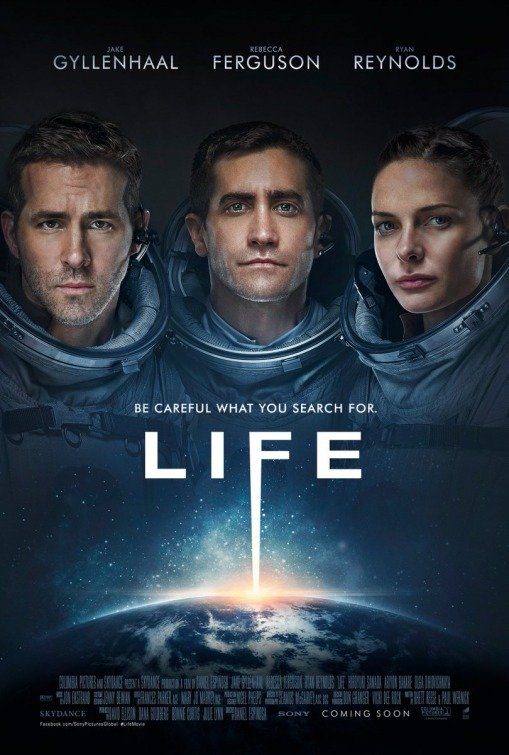 LIFE is an intense science fiction thriller. It opens with the International Space Station crew awaiting an approaching probe from Mars, which is hurtling toward them with soil samples they hope will include the first evidence of life beyond earth. The lead analyst, Hugh, discovers there is indeed a moving, microscopic organism with the sample. Likewise, people on Earth are also excited, with a young girl winning a contest to name the organism Calvin. Hugh quickly becomes attached to Calvin, but when he tries to sting Calvin with an electric wand to see how it reacts, he and the crew get more than they expected.

LIFE is an impressively shot and paced science fiction thriller. The filmmakers have fashioned a movie that relies more on tense atmospherics and exciting mind games than graphic blood and guts, a refreshing change. There are a couple gut-wrenching scenes but most of the movie’s action consists of strong, intense, scary violence. LIFE has some plot holes and a bleak, unappealing ending. It also has plenty of strong foul language. So, MOVEGUIDE® advises extreme caution for LIFE.

(HH, B, LLL, VVV, M) Strong humanist worldview with no religious references about a crew aboard the International Space Station who find themselves fighting for their lives after a seemingly innocent, tiny cellular life form adapts quickly into an ever-growing, malevolent creature that seeks to kill them and absorb their strength and intelligence as the astronauts and scientists hope to exploit the new life form to cure earthly diseases and make all manner of discoveries, leading to a bleak ending that could lead to a sequel; at least 51 obscenities (mostly “f” words), three strong profanities and five light profanities; a couple examples of gory violence featuring blood and choking to death, but mostly lots of strong, intense, scary violence includes attacks from the alien and the human response as they fight to save their lives; octopus-like creature kills by wrapping its tentacles around each person and crushing them, creature crushes man’s hand, creature crushes man’s internal organs, creature also slides into the mouth of one crew member and causes him to bleed from the inside out, another woman dies when the creature breaks the coolant device on her space suit whereupon she chokes on the toxic cooling liquid when it fills her helmet, numerous intense chase scenes throughout the space station where the creature chases the crew members through corridors and nearly grabs them several times while being fought off, and humans use flame throwers and other forms of fire to try and kill creature; no sex; no nudity; no alcohol; no smoking or drugs; and, over-confidence and a bleak ending creates the possibility of a sequel.

LIFE is about a crew aboard the International Space Station (ISS) who find themselves fighting for their lives after a seemingly innocent, tiny cellular life form adapts quickly into an ever-growing, malevolent creature that seeks to kill them and absorb their strength and intelligence. LIFE is an effective, scary science fiction thriller, but it has some plot holes, a bleak unappealing ending and a strong humanist worldview with lots of strong foul language.

The movie opens with the ISS crew awaiting an approaching probe from Mars, which is hurtling through space towards them with soil samples they hope will include the first evidence of life existing beyond earth. The lead analyst, Hugh (Ariyon Bakare), discovers there is indeed a moving, microscopic organism that has come with the sample and is excited because it’s the first evidence of life outside Earth. Humanity is excited as well, with a young girl winning a contest to name the organism Calvin.

Hugh quickly becomes attached to Calvin, speaking of it with affection, while the other scientists, led by Miranda (Rebecca Ferguson) and a doctor named David (Jake Gyllenhaal), are first in awe of Calvin. However, while sarcastic engineer Rory (Ryan Reynolds) warns them that they’re getting too attached to the life form.

When Hugh tries to sting Calvin with an electric wand to see how it reacts, it latches onto and crushes his hand. It almost instantly grows to a very visible size, appearing akin to an octopus. Hugh manages to break away from it, but Calvin gets loose. So, the team quickly seals the lab to keep it from entering the ventilation system and wreaking havoc throughout the station.

Hugh has passed out from the pain, and the crew fears for his safety. So, Rory recklessly floats into the lab and attempts to pull his body out. He succeeds, but gets trapped himself. After failing to kill Calvin with an incinerator, the creature grabs his head, slides down his throat and crushes his internal organs.

What the crew quickly realizes is that each time Calvin latches onto one of them, it not only gets instantly bigger and more powerful, but also absorbs their knowledge. Thus, the remaining survivors not only have to figure out how to kill the Calvin but outwit it as well.

Eventually, they realize that Calvin may even be able to figure out how to get off the station and fly to earth, putting the entire planet in jeopardy. Thus, begins a cat and mouse battle royale that alternates between intense action and thoughtful moments where the characters discuss what inspired them to pursue their careers.

LIFE is an impressively shot and paced science fiction thriller. Director Daniel Espinosa and Writers Rhett Reese and Paul Wernick have fashioned a movie that relies more on tense atmospherics and exciting mind games than graphic blood and guts, a refreshing change from many similar movies. It does have some unmistakably intense and stomach-churning moments, particularly in the scene where Rory chokes on Calvin and winds up spitting up blood that floats in slow-motion, and a scene where another astronaut has her spacesuit’s cooling system broken and chokes on the toxic fluid, but there are no exploding fountains of blood. Most of the attacks, however, are horrifying because they take place in methodical fashion, drawn out for maximum tension, rather than fast and explosively bloody.

To its credit, the movie also has several well-written thoughtful scenes, particularly two involving David, who first describes that he loves being in space because he hates being around the murder and mayhem of earthly war zones where he previously worked. He later shares a beautifully written scene with Miranda where he reads the classic children’s book “Goodnight Moon” during a brief respite from their peril.

The characters never discuss God or religion, but Hugh’s belief that he can manipulate Calvin for earthly purposes could be read as a humanist viewpoint on science mastering all manner of problems. However, his hubris comes back to haunt him, so the movie doesn’t necessarily back his point of view.

Despite the high-quality scares and thoughtful moments, LIFE does have weak spots in the fact that there are a couple of key moments of poor story logic and an ending that some audience members may find is too big a surprise for its own good.  For those who enjoy sci-fi horror movies in the vein of ALIEN, but without so much gore, the movie does deliver enough scares to work. MOVIEGUIDE® advises extreme caution for the intense scary violence and frequent foul language in LIFE.