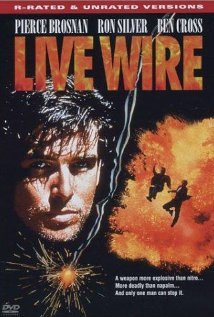 In LIVE WIRE, an FBI agent must foil the plot of European terrorists to assassinate key U.S. Senators with an undetectable liquid explosive. A violent and silly formula cop picture with little if anything to recommend it and much to decry including gratuitous language, gore and nudity.

In LIVE WIRE, since the accidental death of his daughter, FBI bomb-squader Danny O’Neil’s marriage to wife Terry, a beautiful senate aide, has fallen apart. Compounding his troubles is the bizarre explosion of a U.S. Senator. All that is known is that the Senator had a drink of water and went into convulsions seconds before detonation. When a second Senator is offed in like manner, Danny fears for the safety of Senator Traveres, linked with the victims by an arms sale they pushed through Congress. It seems that under the table, the good Senators shafted certain parties, who are now striking back with a deadly explosive which, though indistinguishable from water, detonates when mixed with the stomach acid. Danny protects Traveres, though he hates the Senator for recently having an affair with Terry. Eventually, Danny takes down the baddies and is reunited with his wife.

Borrowing from just about every hit action flick of the past ten years, LIVE WIRE is a laughably tired formula picture that doesn’t even come close to success. Further problems include over-the-top acting and clumsy exposition. Gratuitous language, gore and nudity also plague LIVE WIRE.