MAN ON THE MOON 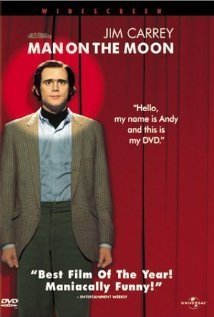 Director Milos Forman, who celebrated pornographer Larry Flynt in a previous movie, now celebrates rebellious, maverick showman, Andy Kaufman, in MAN ON THE MOON. Jim Carrey plays the bizarre comedian in a straight-up biography. The movie explores Kaufman’s early days, as well as his relationships with manager Bob Shapiro and best friend and writer Bob Zmuda. Kaufman’s wrestling antics, his appearances as obnoxious lounge singer Tony Clifton, his lovable role on TV’s TAXI, his struggle with terminal cancer are all documented. Much of the time, he alienates fans and production crews alike, but Andy loved it!

There is no doubt regarding Forman’s talents as a filmmaker, Carrey’s talents as an actor and Kaufman’s quick mind and thirst for the outrageous. Kaufman is not a hero, but rather an influencer, and so this biography is not meant to showcase a role model. Kaufman the man had many deplorable qualities such as womanizing and practicing Transcendental Meditation. The movie says Kaufman wanted to be a pure soul, but he never turned to Christ, the only one who really could make him pure. Interesting and entertaining, but questionable, the movie, like the man, continually pushes the envelopes of humor.

(PaPaPa, FRFR, B, O, LLL, VV, S, N, A, DD, MM) Primarily pagan worldview of rebellious comedian who practices Transcendental Meditation & other false or corrupt Buddhist customs, with depiction of his presumably practicing Jewish parents & a scene with an occult psychic surgeon who is clearly shown to be a fake; 26 obscenities, 5 profanities, other foul words bleeped out as heard on television, many insults & rude remarks by a single character, & some sexual references; many staged scenes of violence & mayhem including brawls & wrestling, all done for comic effect; prostitution solicitation, implied fornication & some heavy kissing; brief scene of upper female nudity; alcohol use; smoking & some marijuana humor used in a comedy sketch; and, constant trickery & difficulties displayed by leading character.

Anybody who watched the late 1970s, early 1980s television program TAXI, knows who comedian Andy Kaufman is. Ironically, Kaufman did not enjoy doing TAXI and thought sitcoms were the lowest form of entertainment. He only did it to gain exposure and to help finance what he really wanted to do: ever increasingly bizarre performance art and practical jokes. Milos Forman, who celebrated pornographer Larry Flynt in THE PEOPLE VS. LARRY FLYNT and lauded blue comic Lenny Bruce in LENNY, now celebrates this rebellious, maverick showman in MAN ON THE MOON.

Jim Carrey, denied an Oscar nomination for THE TRUMAN SHOW, now stands a chance for a nomination as Andy Kaufman. The movie begins like Kaufman himself, very strangely, with Carrey as Kaufman acting as narrator and introducing the movie himself. (Since Kaufman is dead, this posthumous introduction of the movie seems even more eerie.) Then, Kaufman plays a little joke on the audience to set the tone for the movie.

The remaining story is straight-up, linear biography. The movie explores Kaufman’s early days and his relationships with manager Bob Shapiro (Danny DeVito) and best friend and writer Bob Zmuda (Paul Giamatti). These relationships are strained and become even more complex as Kaufman alienates other actors, television executives and fans who just don’t know what to make of him.

A large part of MAN ON THE MOON is devoted to Kaufman’s alter ego: an obese, completely obnoxious and rude lounge singer named Tony Clifton. Kaufman so loved Clifton, who acted so completely opposite of himself, that he demanded Clifton be allowed as an occasional character on TAXI. Kaufman would take his Clifton character out on the road, and many paying customers would boo and/or leave, but this only made Andy even happier!

Kaufman’s storyline concludes with his career as a wrestler, first wrestling women and then wrestling champion Jerry Lawler. Kaufman baits and taunts his opponents just like real big time wrestlers do, even today. Eventually, Kaufman presumably marries one of his female opponents, Lynne Margulies (Courtney Love), and then shocks his fans with the news that he has terminal cancer. Many don’t believe him, including many in his own family. Kaufman tries to go to a New Age faith-healer, but the healer turns out to be a quack. After his funeral, however, the movie suggests that “faking his death” would be the kind of activity Kaufman would do.

There is no doubt as to Forman’s talents as a filmmaker, Carrey’s talents as an actor and Kaufman’s abilities with his quick mind, sense of timing and thirst for the outrageous. He himself tried to downplay himself as a comedian. Indeed, many did not think he was funny at all, and only a few thought he was brilliant. Kaufman is not a hero, but rather an influencer, and so this biography is not meant to showcase a role model.

In fact, Kaufman the man had many deplorable activities. He was a womanizer, fornicating frequently with prostitutes. As Tony Clifton, he was one of the rudest, most profane characters ever created by an actor. Kaufman practiced Transcendental Meditation and other false or corrupt Buddhist customs. When he most needed a savior at his terminal illness, there is no indication that he turned to Jesus Christ, but turned more and more to Eastern religions, which failed him and eventually rejected him because of his antics. In one scene, Kaufman goes to a psychic surgeon who is clearly shown to be a fake.

The only redeeming aspect to Kaufman’s character is that he wanted to be pure. He didn’t personally use drugs or alcohol, and he had no interest in fame. He even worked part-time as a busboy at a diner. One of his most enduring and endearing characters is Latka from TAXI. Latka was a quiet, reticent foreigner who exudes innocence, naiveté and sometimes even integrity. Offstage, Kaufman himself was quiet and shy. Yet, his desire for purity never lead him to the One who could really make him pure – Jesus Christ, the true Messiah.

MAN ON THE MOON is certainly interesting and entertaining, but morally and theologically questionable, constantly pushing the envelopes of humor. The movie could be considered a “Son of LENNY,” Forman’s lewd movie starring Dustin Hoffman as Lenny Bruce, the lewd 1960s comedian who rocked the boat of show business. It therefore ranks as an obviously immoral Oscar contender. It has few positive qualities to counterbalance its protagonist’s sinful behavior or to enlighten viewers with the divine truth, goodness and beauty of God.