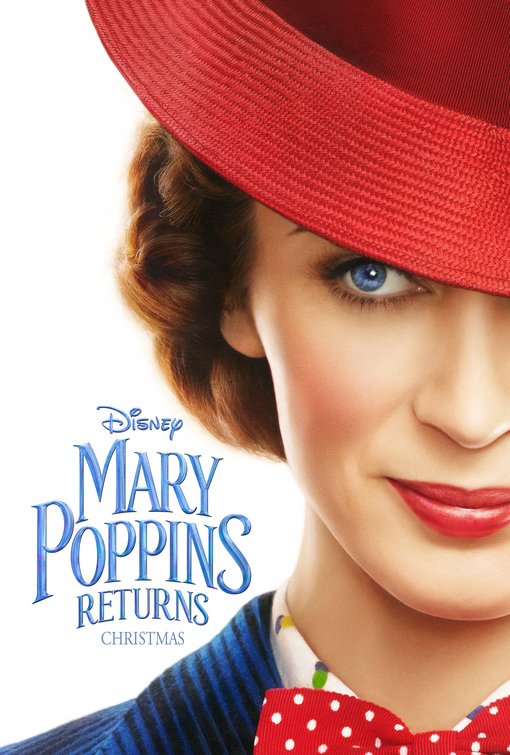 MARY POPPINS RETURNS, set years after the original Disney movie musical, finds Michael Banks (and his sister Jane) all grown up, and Michael has his own children who are in desperate need of a Nanny. We want to give back to a special Community Superstar! Learn more here https://www.communitycoffee.com/communitysuperstar

Posted by Movieguide on Thursday, December 13, 2018

In MARY POPPINS RETURNS, Michael Banks is all grown up and has his own children in need of a Nanny. Michael has had a hard year, after his wife passed. His three children think they must grow up so they can help out their daddy. On top of that, the Bank tells Michael they will repossess their home if the entire bank loan isn’t paid by the end of the week. Michael and his sister Jane remember that their father had stocks in the bank. They just must find the stock certificate. Not long after, Mary Poppins comes to help the children and bring joy and imagination back to the Banks family.

MARY POPPINS RETURNS is a well-made, adorable, enjoyable, fun movie that the whole family will like. It has a strong moral worldview about supporting each other as a family and helping others. Happily, the movie never mentions the use of occult magic. Instead, it encourages children to use their imagination in their daily lives, along with adults remembering their own childhood imagination. MARY POPPINS RETURNS will charm and entertain the entire family.

(BB, C, FR, V, M):
Dominant Worldview and Other Worldview Content/Elements:
Strong moral pro-family worldview with light redemptive elements, including a theme of helping others in need, loving your family, one brief mention of magic in a song, and one song says you must let the light lead the way, but there’s one song saying there’s no concrete death and Mary Poppins has a bit of an ego but she helps others;
Foul Language:
No foul language;
Violence:
Light jeopardy and characters fall from things, plus some characters use ladders to go up great heights;
Sex:
No sexual content;
Nudity:
No nudity;
Alcohol Use:
No alcohol use;
Smoking and/or Drug Use and Abuse:
No smoking or drugs; and,
Miscellaneous Immorality:
Villain lies, but he’s found out.

MARY POPPINS RETURNS, set years after the original Disney movie musical, finds Michael Banks (and his sister Jane) all grown up, and Michael has his own children who are in desperate need of a Nanny. MARY POPPINS RETURNS has a strong moral worldview, with more imagination and less magical thinking, about supporting each other as a family. Adorable and enjoyable, MARY POPPINS RETURNS will entertain the entire family.

After a great song about blessing from above, the movie cuts to Michael and his sister Jane Banks, who are working hard to stay afloat. This has been an especially hard year for Michael and his children, because of the passing of his wife. When the bank shows up to tell Michael he hasn’t paid his loan on the house in several months, he says he’ll pay it ow. They tell him that this isn’t acceptable, and the bank needs the entirety of the loan paid off because he was so far behind. Michael is distraught and doesn’t know how he will accomplish this, but Jane reminds him that their father had stock in the Bank, they just must find the missing certificate saying they have the stock.

Shortly after this, when Michael’s children, Anabel, Georgie, and John are walking in the park, Georgie sees a kite that Michael had thrown away and runs after it. Just at that moment, Mary Poppins floats down from the sky with the kite. Mary Poppins tells Michael she will help with the children, while he searches for the bank certificate.

Will Michael be able to find the certificate with the help of Jane? Will the children learn how to use their imagination, instead of being defeated because of the loss of their mother?

MARY POPPINS RETURNS is a well-made, adorable, enjoyable, fun movie that the whole family will like. The movie has many moments and scenes that are nostalgic to the first movie. Though this is the case, MARY POPPINS RETURNS has a theme about imagination rather than magic. The movie never mentions the use of magic. Instead, it encourages children to use imagination in their daily lives, along with adults remembering their own childhood imagination. This is a wonderful theme in an age where children spend much of their time on devices and computers, rather then going outside, playing, creating, and imagining. One song says you must let the light lead the way, but another song says there’s no concrete death. Of course, according to Christianity, we live in a concrete reality, with real death and real pain, and so we are in need of a real savior.

That said, MARY POPPINS RETURNS has excellent songs, animation, and a well-plotted story. The movie follows much of the lighthearted style of the original, with traditional animation. It also has great musical numbers, with nods to the original MARY POPPINS. The storyline is clear from the beginning and very well done. Some much younger children may be scared by the jeopardy. Overall, however, the whole family will enjoy MARY POPPINS RETURNS.