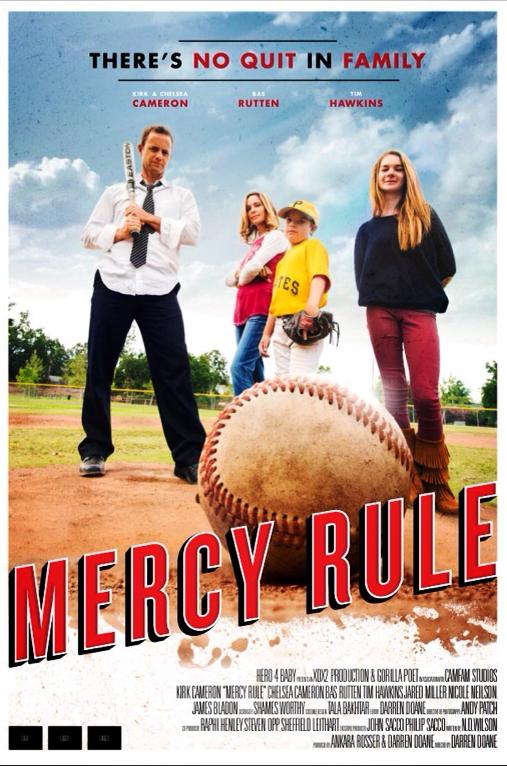 MERCY RULE is a well-written family movie starring Kirk Cameron. John Miller’s family prays together, eats together, reminisces about their deceased inspirational grandfather together, and attends sporting events together. They deeply love one another and stay steady in supporting each other through difficulties. A cunning environmentalist lobbyist tries to destroy John’s recycling business. Meanwhile, John’s son Cody works hard to succeed on his little league team. He dreams of pitching for the team.

MERCY RULE has no negative worldviews or elements. It contains no sex or nudity, no foul language, and no violence. While the content, writing, and acting are generally very good for a movie of MERCY RULE’s budget, the movie feels a little long. All in all, however, it has good entertainment value. MERCY RULE is exemplary in terms of its content. It has a strong Christian moral worldview, with strong pro-capitalist elements. It depicts a business owner who takes pride in his work and struggles to save his business from a radical pro-environmentalist agenda set against him. MERCY RULE is a very positive, uplifting movie with no objectionable content.

(CCC, BBB, CapCap) Very strong Christian, moral, pro-family worldview, with some strong pro-capitalist/small business elements; no foul language; no violence; no sex; no nudity; no alcohol; no smoking or drugs; and, nothing objectionable.

MERCY RULE is a family movie starring and produced by Kirk Cameron. It follows the ups and downs of a father trying to save his business from lobbyists while his son struggles to succeed on his little league team. This well-written story shows how a family comes together in the midst of trying circumstances and stands strong for one another.

MERCY RULE depicts a middle-class, suburban American family, the Millers. The father, John (Kirk Cameron), owns a scrapping and recycling business, Dante, started by his father. His business has been successful for many years while operating with honesty and integrity. However, a cunning lobbyist named Evan Trufant (James Bladon) pays John a visit one day in an attempt to undermine the business. He attacks John with a pro-environment agenda, accusing John’s business of recycling hazardous waste and toxic materials. John feels crushed by the liberal laws and policies that make his company’s death seem imminent. He draws strength from his wife, Maddie (Chelsea Cameron), who lovingly encourages him, and from his brother, Uncle Ben (Tim Hawkins), whose friendship likewise keeps him afloat.

Meanwhile, John’s son Cody (Jared Miller) is working diligently to succeed on his little league team, and dreams of being able to pitch for them. Cody pleads with his eccentric but familial coach (Bas Rutten) to be able to pitch, and eventually gets his chance.

MERCY RULE weaves together the story of John’s struggle to save his business and Cody’s struggles and triumph on his baseball team. It has a very strong Christian, moral worldview, with strong pro-capitalist elements. MERCY RULE is exemplary in terms of its content. It’s a very positive and uplifting movie.