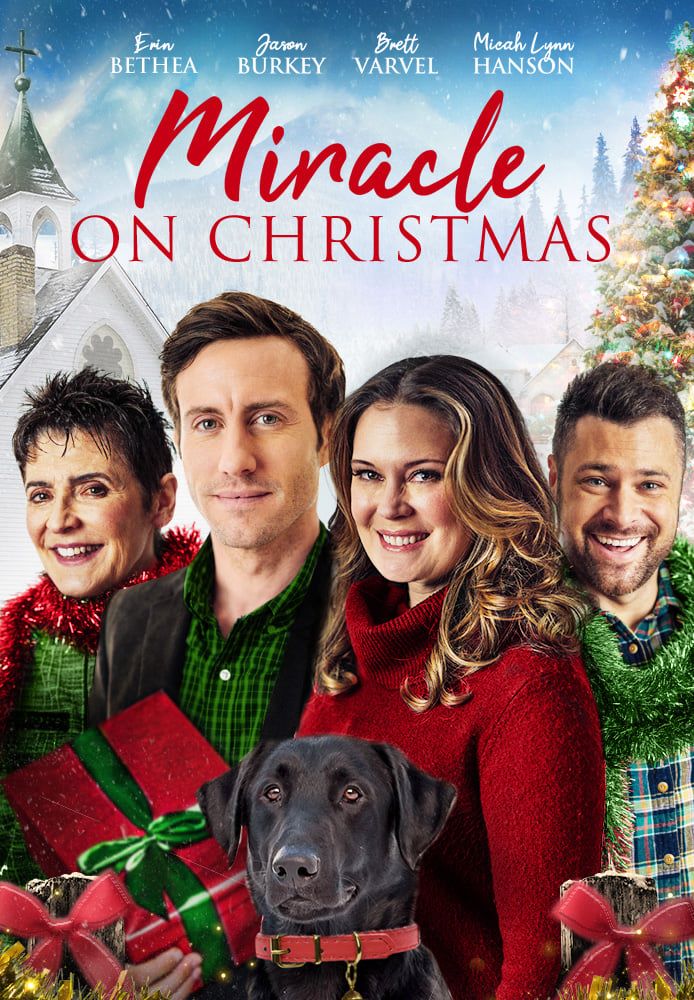 MIRACLE ON CHRISTMAS is an uplifting Christmas drama available on Amazon Prime and on DVD. Despite her loving family, the holiday spirit seems distant for Mary Boyce. Mary’s father died last Christmas, and her husband, James, recently was given only 18 more months to live by his doctor. James brings home a stranger named Harry from church to have Christmas dinner with Mary’s mother, brother, sister, her sister’s husband and son, and her brother’s new girlfriend.

MIRACLE ON CHRISTMAS isn’t a depressing, drawn-out dramas about a person dying of some terrible disease. Instead, it’s a heartfelt drama about one woman overcoming a crisis of faith through the power of Christmas. It does a great job setting a Christmas mood and spreading the joyful message of the Savior’s birth. MIRACLE ON CHRISTMAS has a strong Christian, biblical worldview, with many positive references to Scripture. It has several Christmas carols sprinkled throughout, including a beautiful version of “Hark the Herald Angels Sing” by Harry’s character. Harry also tells a powerful rendition of the Nativity Story. MOVIEGUIDE® highly commends this Christmas movie, MIRACLE ON CHRISTMAS.

(CCC, BBB, L, V, M):
Dominant Worldview and Other Worldview Content/Elements:
Very strong Christin, biblical, moral worldview includes many positive references to Scripture, one character tells a powerful rendition of the Nativity Story during the movie, the character sings a beautiful version of “Hark the Herald Angels Sing,” other Christmas carols depicted in the movie include “It Came Upon a Midnight Clear, “Oh Little Town of Bethlehem,” “Oh, Holy Night,” “Joy to the World,” and a reverent, joyful version of “Deck the Halls,” beautiful references to King David, Psalm 23 and the biblical story of the angel Gabriel coming to Mary, the Gospel is preached, and the movie refers to Jesus as our Divine Savior and frequently promotes having trust, hope and faith in God.
Foul Language:
No obscenities but one or two muffled, borderline light profanities that can be viewed as appeals to God rather than curses
Violence:
Light violence includes man catches a football and throws out his back and a football hits a car windshield
Sex:
No sex scenes or sexual immorality, though it’s mentioned that female lead’s younger brother has had a string of girlfriends
Nudity:
No nudity
Alcohol Use:
No alcohol use
Smoking and/or Drug Use and Abuse:
No smoking or drugs; and,
Miscellaneous Immorality:
Woman has some angry words with her brother and woman suffers a crisis of faith, but these are rebuked and overcome.

In MIRACLE ON CHRISTMAS, which is available on Amazon Prime and on DVD, the holiday spirit seems distant for Mary Boyce until an unexpected visitor and a miracle change everything when her mother and siblings come to spend Christmas Day with her husband and two children. MIRACLE ON CHRISTMAS is a heartfelt drama that does a great job setting a Christmas mood and spreading the joyful message of the birth of the Savior, Jesus Christ.

The movie opens on Christmas morning. Mary’s husband, James, and her children, Lydia and Caleb, are ready to open presents, but Mary just wants to lie in bed. She’s despondent, because her father died last Christmas, and her husband recently was given only 18 more months to live by his doctor. James may be accepted into an experimental program to treat his disease, but the outlook for that isn’t hopeful.

Mary complains to James that there’s no guarantee that they’ll have another Christmas together. James, however, reminds her that, at least they’ve been blessed with this Christmas together. So Mary puts on a happy face to go out into the living room and celebrate Christmas morning with the children.

Their children, Lydia and Caleb, give Mary a present of a framed photo of Mary and James on their wedding day. Mary gets upset, however, when James’ gift to her is tickets to go on a cruise in 18 months. To James, it’s a gift of hope, but to Mary, it’s just an unpleasant reminder of the doctor’s diagnosis.

Cut to James and the children getting ready to attend Christmas services at church. Mary isn’t in the mood to attend. Also, she wants some time to prepare the Christmas Day meal for her mother, Helen, sister, Martha, Martha’s husband, Bill, their son, Josh, her younger brother, Peter, and Gabriela, Peter’s latest girlfriend. Mary isn’t happy with her brother, Peter, who’s still living at home and has apparently alienated a string of previous girlfriends. To make matters worse, while Mary’s preparing the meal, she accidentally knocks the framed photo from her children onto the floor, and it breaks. The man on the Christian radio station mentions the angels on Christmas announcing the birth of Jesus and praising God. In frustration, Mary says, “I’d welcome just one angel with some good news.”

At church, James and the children are amazed by the singing voice of a man visiting the church that morning. After the service, the pastor introduces the man to James and the children. The man’s name is Harry, the pastor says, and he’s in town on business. When Harry says he’s not having Christmas dinner with anyone, Lydia exclaims, “That’s terrible! No one should be alone on Christmas.” So, James invites Harry to spend Christmas dinner with them. Of course, Mary isn’t jumping for joy about having another person for Christmas dinner, but James reminds her he has no place to go and that it’s the godly thing to do to show hospitality to strangers.

As Mary’s mother and siblings arrive, it becomes clear that Harry is more than a little bit strange, even for a stranger, but very polite and multi-talented, with a great heart for the Lord. In fact, he’s very eloquent in talking about God with the other men and with Peter’s Spanish girlfriend, Gabriela, who’s managed to entice Peter the agnostic into coming regularly to church with her. He even breaks into Spanish with Gabriela, mentioning to her that her name is derived from the angel Gabriel, who told the Virgin Mary that should would give birth to the Savior, Jesus. However, Mary is skeptical about her agnostic brother Peter’s interest in going to church with Gabriela.

Eventually, Mary’s ongoing conflict with her brother comes to a head. It also brings to the forefront her anger over Peter’s diagnosis, which they haven’t yet disclosed to her family. Can anyone or anything dissolve Mary’s anger and renew her faith and hope?

MIRACLE ON CHRISTMAS is a heartfelt drama that does a great job setting a Christmas mood and spreading the joyful message of the birth of the Savior, Jesus Christ. The movie’s Christmas music and soundtrack help a lot to set this mood. Also, the movie’s dramatic moments have some whimsical and comical moments that lighten the drama. Furthermore, MIRACLE ON CHRISTMAS isn’t one of those depressing, drawn-out dramas about a dying person. The movie is mostly about one woman overcoming a crisis of faith through the power of Christmas. A few scenes could have been better edited, but, on the whole, the movie tells a heartrending story of joy, love, faith, and hope. More than once in the dialogue, someone says, “Though we may not know what the future holds, we know Who holds the future.”

Dramatically, MIRACLE ON CHRISTMAS has a strong Christian, biblical, morally uplifting worldview with many positive references to Scripture. For example, Harry’s character tells a powerful rendition of the Nativity Story during the movie. He also sings a beautiful version of “Hark the Herald Angels Sing.” Other Christmas carols depicted in the movie include “It Came Upon a Midnight Clear, “Oh Little Town of Bethlehem,” “Oh, Holy Night,” “Joy to the World,” and a reverent, joyful version of “Deck the Halls.” MIRACLE ON CHRISTMAS also contains beautiful references to King David, Psalm 23 and the biblical story of the angel Gabriel coming to Mary. In addition to all this, the movie refers to Jesus as our Divine Savior and promotes having trust, hope and faith in God. MOVIEGUIDE® highly commends this Christmas movie, MIRACLE ON CHRISTMAS.