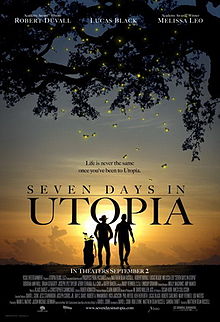 SEVEN DAYS IN UTOPIA stars Robert Duvall and Lucas Black. After a disastrous debut at the San Antonio Open, young golfer Luke Chisholm finds himself stranded in Utopia, Texas and welcomed by an eccentric rancher named Johnny Crawford. Luke finds out that long ago Johnny was a great golfer. Much to Luke’s chagrin, all the townspeople find out how badly Luke did at the tournament, including throwing a temper tantrum and Luke’s father publicly walking out on him. When Johnny’s sister takes Luke to the town fair, the young Texas cowboys make fun of him. Johnny’s beautiful niece takes compassion on him, and Johnny decides to teach Luke how to really play golf.

(CCC, BBB, L, V, M) Very strong Christian worldview with a powerful conversion, wonderful reconciliation between father and sons, terrific moral values, the discovery of important moral lessons in life, references to God walking with us, working in mysterious ways, church service scenes, Bible scenes; one “h” word, one “God-forsaken” and one partial light profanity that isn’t finished; minor violence in plot points such as man gets into car accident avoiding a cow in the middle of the road, slight bleeding, man beats car with car with golf club, rodeo where bull chases guys who are trying to see who can stay longest in a ring with a mad bull; no sex; no nudity; older man keeps bottle as a trophy that he quit alcohol and talks about alcohol destroying his marriage and his life; no smoking; and, somewhat friendly gambling between four Texas young men on several games they’re playing but nobody ever wins although the gambling is not rebuked.

SEVEN DAYS IN UTOPIA is a marvelous, faith-filled, compelling, heartfelt, fascinating masterpiece that recalls TENDER MERCIES and some of Robert Duvall’s other great movies.

The movie opens quoting Isaiah 30:21: “Whether you turn to the right or to the left, your ears will hear a voice behind you saying, ‘This is the way, walk in it.’”

Cut to Luke Chisolm, driving from the Texas San Antonio Open golf tournament across Texas in a fit of anger and despair as he recalls how badly his game fell apart on the last hole. His despair is heightened by the fact that his father’s obsessive and oppressive dream was that his son would be a great golfer. In a fit of rage, Luke throws his ringing phone out the window and looks up just as he’s about to hit a cow. He serves and wrecks his car on the ranch of Johnny Crawford, a fascinating older man played by Robert Duvall. Johnny takes Luke under his wing and says it’s no accident that Luke is there, as he takes him into the small town of Utopia, population of 575.

Sarah, the beautiful young waitress who calls Johnny uncle, tends to Luke’s wounds and drives Luke to Johnny’s lodge run by Johnny’s sister. The young cowboys in the town don’t like Luke. One of them, Jake, has his heart set on Sarah, but she doesn’t have her heart set on him.

Luke finds out by looking at the pictures in the rustic lodge that once upon a time Johnny was a great golfer. Suddenly, the Golf Channel cuts to a report on the Texas Open showing how miserably Luke did. Luke not only missed his shot, hit the trees, bashed his golf club, and threw a temper tantrum, but also his father walked out on him — all captured on TV. Everyone in Utopia is watching at the café. When Johnny’s sister takes Luke to the town fair, the young Texas cowboys make fun of him. Of course, Sarah takes compassion on him, and Johnny tells Luke that he will teach him how to really play golf.

The next morning, Duvall tells Luke to meet him on the driving range. Like THE ULTIMATE GIFT, each day’s practice is totally unexpected. One day, Johnny has Luke go fishing to learn patience and balance. On another day, he has him paint an oil painting so he can visualize the green. On another day, Johnny has Luke competing with the young cowboys by throwing washers into a tin can buried in the ground. Luke thinks none of this has anything to do with golf, but Johnny says that Luke has to learn deeper values before he becomes a golfer. Johnny tells Luke that he has to find some conviction or any offhand comment during a game will throw him off. Johnny tells Luke he needs to find rhythm and balance, and he needs to understand family, friendship, faith, and love. Also, Luke needs to have a respect for tradition but a passion for truth. Most of all, Johnny tells Luke that he needs to understand God’s plan and see God’s face.

The movie develops all of these themes organically, in the midst of the story. [SPOILER ALERTS] Eventually, Luke accepts Christ, goes to church, reads the Bible, and understands there are more important things in life than golf.

Many people who see SEVEN DAYS IN UTOPIA will fall in love with it. The direction is surprisingly excellent. The acting is subtle and convicting. Robert Duvall gives his best performance of many great perfomances. The whole cast works together like an ensemble. The songs are surprisingly Christian, and the plot is an unexpectedly overt, captivating, eloquent salvation story that’s not preachy or amateurish. It’s like merging TENDER MERCIES with THE ULTIMATE GIFT.

That said, there are some glitches. [SPOILER ALERTS] There seems to be a climax when Johnny goes to church, then a second climax several minutes later when he goes to play in the Texas Open. In most movies, the double climax would be obnoxious. In this movie, it works wonderfully.

In the 1980s, they would give this movie an Academy Award, but the Academy has changed considerably. Robert Duvall certainly deserves one, but he also deserved on for last year’s GET LOW. However, discerning viewers can give it their own award by going to see it and enjoy it. MOVIEGUIDE® knows Robert Duvall. He has faith. And, his faith shines in this movie.

Please note that there’s some friendly gambling in the movie. It is not gambling to win or to make money, however. It’s just silly, cowboy betting on games, like rodeos. Some groups got terribly offended by just the horse racing in SECRETARIAT, despite the movie’s Christian premise. While we abhor gambling addiction, the friendly, brief gambling in SEVEN DAYS IN UTOPIA is not the type of thing that should keep people from coming to it, because the movie is not about gambling at all.

SEVEN DAYS IN UTOPIA is a salvation story that can set many people free. The movie talks about freedom in Christ. Duvall’s character talks about the sin of alcohol and the blessings of the Gospel. Movies don’t get much better than this. SEVEN DAYS IN UTOPIA is a gem with an inspiring, uplifting story that points to the Gospel of Jesus Christ in a stirring, eloquent way. The end of the movie is a stroke (no pun intended) of