"Fighting the Goliath of Gross Injustice" 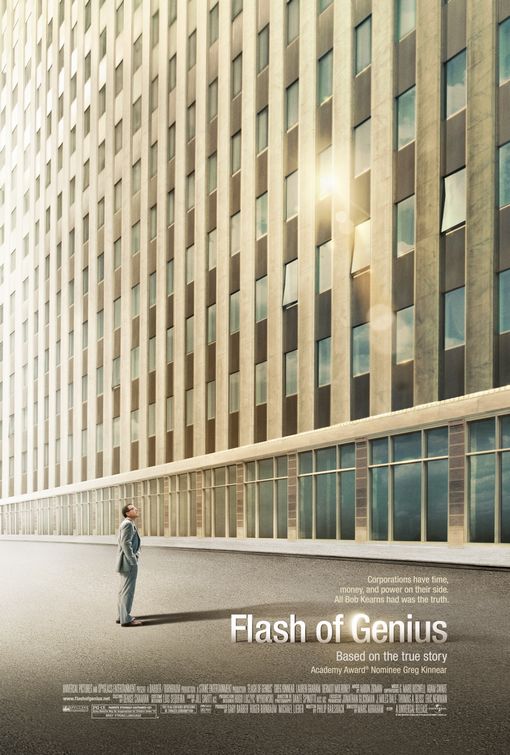 FLASH OF GENIUS stars Greg Kinnear in a tour-de-force performance as an outraged inventor fighting the big auto companies in Detroit. Kinnear plays Bob Kearns, an engineering professor who invents the idea for an intermittent windshield wiper after driving in the rain with his large family. The Ford Motor Co. expresses interest in his invention. After reluctantly handing over his invention for “regulatory” approval, the company’s executives pull the ultimate con by leaving Kearns completely out in the cold. Kearns soon sees Ford cars using his invention, without him seeing a dime. That sets off a lifelong obsession to seek justice, not just money. This obsession eventually alienates Bob’s wife, but Bob marches steadfastly toward his goal.

FLASH OF GENIUS is not as dramatic and energetic as it could and should have been. Even so, Greg Kinnear gives a brilliant performance that captures the highs and lows, and ultimate triumph, of the little guy who takes on City Hall. The great strength and redemptive force of the movie is the true story itself and its universal, timeless message celebrating the search for justice. Some foul language requires caution for children.

(BB, CC, CapCap, LL, V, A, D, MM) Strong moral worldview with strong, but brief, positive Christian content in beginning with a prayer being answered and a short scene set in a church, plus a strong capitalist message about getting properly rewarded and acknowledged for your creativity; 12 obscenities and six profanities; light violence such as protagonist forcibly removed from auto show and also from bus (but no fighting) and protagonist steals auto part and is chased by owner, who throws drink at him); no sex but wife wearing nightgown makes tasteful suggestive proposition to husband about making another baby; no nudity; alcohol use; smoking; and, obsession, lying, man steals auto part after Ford Motor Co. steals his invention, father has mental breakdown after alienating his wife, and wife leaves husband after he becomes obsessed with what seems to be a lost cause, at the expense of taking care of his family.

Based on a short New Yorker Article, which by the way, is also a true story, FLASH OF GENIUS is the quintessential tale of the little guy who takes on City Hall … and wins, even if it costs him all he ever cared for along the way.

City Hall in this case is the mighty Ford Motor Company in early 1960s Detroit. Dr. Bob Kearns (Greg Kinnear) is the little guy, an engineer and college professor who likes to invent “things” in his spare time.

One day while driving in the rain with his large family, Dr. Kearns has an “epiphany” when he suddenly decides to develop a mechanism that will overcome the inherent shortcomings of a constant speed windshield wiper operating against the varying intensity of rainfall. Before long, the good professor designs and builds the first prototype. The next step is to patent it and then market it on the way to a lucrative manufacturing campaign.

With the assistance of a good friend and auto parts dealer, the professor eventually gets a chance to make his pitch to Ford executives who realize he has the real thing, and so they offer to purchase it. After reluctantly handing over his invention for “regulatory” approval, the company’s executives instead pull the ultimate con by leaving him completely out in the cold. Kearns soon sees Ford cars using his invention, without him seeing a dime.

The shocked, and progressively outraged, inventor at first tries to get his grievances redressed by sending letters and making phone calls to everyone involved, but he is completely ignored. Even his long time friend, and potential partner, turns his back on him as everyone now appears to be in Ford’s deep pockets. Finally, Dr. Kearns hits rock bottom with a mental breakdown. The good thing is that when you hit bottom you can only go up from there. Thus, with a renewed sense of purpose, Dr. Kearns begins a slow uphill battle. The downside? His family is no longer on board, and they want out.

As an artistic cinematic presentation, FLASH OF GENIUS is not a remarkable movie. The photography is rather unimaginative, with the colors washed out, giving the movie almost a 16mm like stock look. All the actors are certainly professional in their particular roles, including Dr, Kearns’ six children, but sometimes seem to be distant and aloof from one another, without any real energy or chemistry. Nowhere is this collective somnambulism more evident than in the Dr Kearns’ lovely wife Phyllis (Lauren Graham), who claims to love her husband, but “till death do us part” turns out to be just a bit too much to ask. Greg Kinnear, however, stands out as Bob Kearns, going from excited inventor and family man to troubled victim and back to excited fighter against great injustice. One scene in particular is noteworthy, when Dr. Kearns tells his lawyer, played by Alan Alda in a memorable cameo, that he doesn’t just want money from Ford, he wants them to apologize for the wrong that they did.

Thus, the great strength and redemptive force of the movie is the true story itself, which reminds us that there is more than money to life, and that justice is pursuing. A well-known Bible passage states “What does it profit a man if he gains the whole world, but loses his own soul?” The humble claim to glory for FLASH OF GENIUS is not its imagery, or the chemistry between its actors. The real achievement of the movie is its universal, timeless David versus Goliath message about an average but talented man fighting for justice, especially as portrayed by Greg Kinnear in a tour-de-force performance.