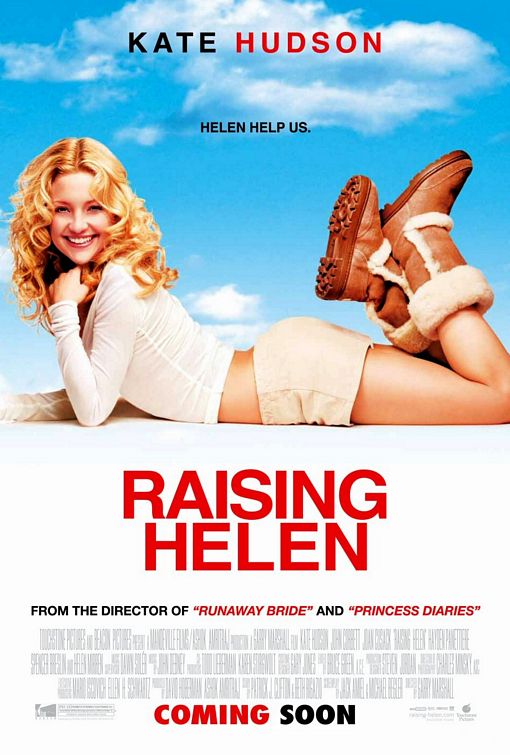 In the pleasant RAISING HELEN, Kate Hudson’s character works at a fashion modeling agency, which affords her a nice apartment and a fast-paced life. When one of her sisters dies in a car accident, Helen is given custody of her sister’s three children. The choice surprises both Helen and her surviving sister, played by the excellent Joan Cusack. Free-wheeling Helen has to change her life to fit others into it. She moves from Manhattan to Queens with the children and quits the modeling agency to work elsewhere. Helen enrolls the children in a private Lutheran school, where the principal, Pastor Dan, becomes a good influence on everyone. Eventually, Helen learns that her personal relationships and responsibilities are more important than the superficial, exciting life she led before.

The story of RAISING HELEN is not original, but it is well done, mostly because of the skilled actors and sensitive direction by Gary Marshall. There is a smattering of foul language and some light innuendo. At just under two hours, the movie may feel a bit long. Still, RAISING HELEN is a charming, ultimately family-friendly comedy with a strong, positive depiction of a young, honorable Christian pastor.

(BB, CC, L, S, A, D, MM) Strong moral worldview in which family takes priority over work and glamour, with a Lutheran Christian pastor being a good influence and father figure to orphaned children and their female guardian; five obscenities and no profanities; fornication implied as characters walk into apartment, teenagers found in motel, and the pastor makes a relatively harmless joke about “dirty movies”; no nudity, but runway models shown in lingerie with female cleavage; adults drink wine, and high schoolers drink beer at party; characters smoke cigarettes, but it is rebuked and they make efforts to quit; and, woman lies to minister to get her children into a religious school, and teenager lies to guardian and runs away with a bad influence.

Had JERSEY GIRL been directed by Garry Marshall instead of Kevin Smith, it would be RAISING HELEN. The plots are extremely similar and some of the scenes even feel like déjà vu. HELEN, however, has more appealing ingredients, including Kate Hudson, the underappreciated Joan Cusack, and a more family-friendly script.

Helen Harris (Hudson) works at a fashion modeling agency. It’s an exciting job that affords her a nice apartment and a fast-paced social life. When one of her sisters dies in a car accident, Helen is given custody of her sister’s three children. Both Helen and her surviving sister Jenny (Cusack) are surprised at the choice. Helen is free-wheeling and irresponsible, while Jenny already has a thriving family of her own and would have been the most obvious choice for guardian.

Helen moves from Manhattan to Queens with the children. She quits the modeling agency to work at a used car dealership. They find a private Lutheran school to attend, and the principal, Pastor Dan (John Corbett), becomes Helen’s love interest and a father figure to the recently orphaned children, who are still in a lot of pain. Pastor Dan is a very likeable character who exhibits care and compassion. He sets a good example for the students at his school, as well as for Helen. This positive portrayal of a Protestant Christian figure is a big plus for the movie.

Joan Cusack adds depth to the story. Her Jenny character is uptight and made uncomfortable by Helen’s vividness. She feels perennially upstaged by her younger sister, and the audience sympathizes with her simultaneous jealousy and criticism of Helen. The sensitive direction by Gary Marshall also helps immensely.

RAISING HELEN is not an original story, and sometimes the formula peeks through the scenes. Also, at just under two hours, it’s a little long and could have used some judicious editing in the final act. Still, RAISING HELEN is a charming, ultimately family-friendly comedy with a strong, positive depiction of a Christian pastor. Watching the children cope with their parents’ death may bother some older children.