A HOME OF OUR OWN 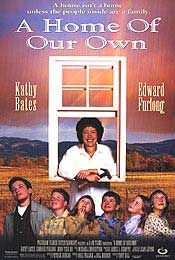 The movie A HOME OF OUR OWN tells the story of a widow and her six children who, despite their poverty, attempt to have their own home. Although the film contains some foul language, it also has humor and shows the family working together in love and harmony to accomplish a worthwhile goal.

In A HOME OF OUR OWN, when Frances Lacey, a widow with six children loses her job in Los Angeles, she and her children head for Hankston, Idaho. The story is told from the perspective of the oldest child, 15-year-old Shane, as he attempts to fill in as “the man of the house.” They find a ramshackle, roofless house in the middle of nowhere and decide “This is it.” The owner is Mr. Moon, a Chinese man who owns a nursery. All of the family’s efforts, with Mr. Moon’s blessings, are soon poured into the house, and the rest of the film deals with the family’s ups and downs of building their dream home. They have some bad moments, along with the joys and happiness they experience, especially when Shane contests his mother’s authority.

The generosity and friendship of Mr. Moon softens Frances’ heart somewhat, and although she shuns charity and is known to be a strict disciplinarian, she loves her children and wants the best for them. She does engage in some profane language. However, the film has no sexual situations or nudity, although one of Frances’ suitors tries to have sex with her and roughs her up on a date. Despite her not being a religious person, Frances allows Mr. Moon to say a prayer at their Thanksgiving dinner in which he thanks God for the Lacey family. The movie is not an outstanding drama but is well acted and heart warming.