ALL THE QUEEN’S MEN 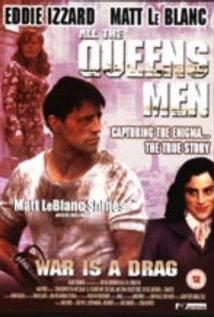 ALL THE QUEEN’S MEN stars Matt LeBlanc as a World War II operative. He must lead a team of inexperienced British men behind enemy lines. Based on a true story, these soldiers must infiltrate the factory where the German code machine, the Enigma, is made. The factory is staffed entirely by women, however, so the men must dress in drag in order for the mission to be a success. One of the men is a homosexual transvestite who trains the team to behave like transvestites.

The movie has a lot of humorous possibility, but falls short of its potential. It is marred by a pro-homosexual agenda that is completely unnecessary for the story, not to mention that it’s morally wrong. The sensuality portrayed in the movie is both disturbing and degrading. LeBlanc’s clichéd romance felt like pure Hollywood fare which one would hope an independent film like this could avoid. His character was also inexplicably superstitious, serving no purpose in the story. Poor story telling, a lack of morals, and overt politicizing drown out the patriotic elements shown. Rather than seeing ALL THE QUEEN’S MEN, check out the classic film SOME LIKE IT HOT

(HoHoHo, PP, RoRo, Pa, LLL, VV, S, NN, AA, D, M) Strong homosexual viewpoint, though initially seen as wrong by most, they soon change their mind as they accept it as normal with patriotism for the allies, including German traitors, and romantic view of trusting one’s heart over one’s head, strong emphasis on the evils of a war between nations, focusing on the innocence of the individuals involved by looking at the results of bombing with a bleak worldview & some pagan superstitions; 25 obscenities & 9 profanities; most violence hand to hand combat, mention of nearly biting a man’s finger off, one death by knifing, a death by a toy pick axe where the somewhat graphic blood is seen after the fact, a couple deaths by gunshot, and bombing aftermath, mostly building destruction, some bodies lying there, nothing graphic; two occasions of implied sexual immorality, a scene of seduction between a man and woman, two men embrace and kiss, one scene meant to be humorous as one man tries to seduce a man who he thinks is a woman, which eventually culminates in sadomasochism as the man in drag has to knock the other one out; one black and white photo of a nude woman, a nude sculpture of a woman suggestively caressed, and a few scenes of both men and women in non-revealing 1940’s women’s underwear; some alcohol use and drunkenness; smoking; and, lying which is later rebuked by the film, and a flippant attitude about death.

ALL THE QUEEN’S MEN is the latest movie from one of our Thursday-night “Friends;” this one starring Matt LeBlanc. Based on a true story, LeBlanc plays an American World War II special operative, Steven O’Rourke, sent to retrieve the German code machine known as the Enigma. LeBlanc crosses enemy lines to covertly infiltrate the factory where the Enigma is made, but the only problem is that the factory is staffed entirely by women.

The movie begins with Agent Almost, as O’Rourke is known due to his several previously failed attempts, being thrown into a British prison. It is here that he is recruited by the Brits to help lead a team into enemy territory. The team includes a British desk clerk, a young code breaker, and Tony Parker, a former British soldier played by Eddie Izzard. The Commanding Officer then informs the inexperienced men that the only people in Germany now are soldiers, children, old men, or women. In order for the mission to be a success, they must all dress in drag.

Apparently seen as good fortune, Parker is a cross-dressing homosexual who had been previously forced to leave the British army for this very reason. Though homosexuality is initially seen by the characters in a dark light, as would be expected from people in the early 1940s, it isn’t long before they accept it, giving the movie a late ’90s, “politically correct” feel. Though the mission is deemed too dangerous for women, it is never explained why the team is not at least trained by women to act like women, rather than trained by a transvestite to seemingly act like a transvestite. Regardless, after Parker’s training, the men are ready to proceed into war-torn Germany.

There the team must work to discover the location of the factory, as the British intelligence had been fooled by a decoy. There, they discover the true horrors of war: the many buildings destroyed, the parentless children, and the frightened people. They also meet their German contact, a beautiful woman named Romy, who is soon involved romantically with our hero, O’Rourke.

This is where the story begins to derail. A subplot develops involving Izzard’s former homosexual German lover, the bond they share, and their reuniting. The romance between Romy and O’Rourke is contrived, predictable, and dull. Their bizarre connection is also where romantic emotionalism is strongly portrayed — using one’s emotions over one’s brains. O’Rourke just has to leave Romy one final love letter before leaving, thus endangering the lives of his men and their mission. The story drags, the men are in drag, and it isn’t until after they reach the factory, that they discover what their true mission has been all along.

Some of the other problems with the movie, for example, are LeBlanc’s poorly explained superstitious actions. He will not move while a clock is ringing the hour and he avoids a bomb shelter during an Allied raid because it is number 13. These are just ridiculous character elements that serve little purpose when presented, and are never mentioned again. Failing to portray hopelessness, LeBlanc gravely states, “You gotta believe in something.”

The sexuality in the movie is also depressing. Women are willing to trade a glimpse up their dress for food stamps. Romy must allow herself to be used sexually by a German soldier to save the mission. Even the seduction between Romy and O’Rourke is disturbing. Somehow using a knife and explaining how to kill a man is considered sexual foreplay.

Though the quality is better than some previous movie work by the FRIENDS cast (remember LeBlanc co-starred with an ape in the movie ED), ALL THE QUEEN’S MEN is a clever idea that falls short. Rather than being a lighthearted movie, along the lines of TOOTSIE or SPIES LIKE US, ALL THE QUEEN’S MEN has an agenda. The promotion of homosexuality gets in the way of the story, not to mention some of its moral shortcomings. LeBlanc is a lot like the character he plays. He might be getting closer to genuine success, and going the Indie route with a low budget film was a step in the right direction, but Agent Almost still can’t hit the mark.