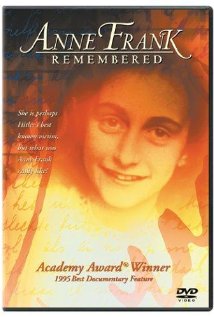 ANNE FRANK REMEMBERED recalls the person of young Anne Frank who went into hiding with her family from the National Socialists during World War II. She spent those caged years writing in her now world famous inspirational diaries. Showing the horrors of war, this is a moving story of courage, heroism and the indomitable spirits of not only Anne, but also of her father and the many others who knew and helped the Frank family.

ANNE FRANK REMEMBERED recalls the person of young Anne Frank who went into hiding with her family from the National Socialists during World War II. Father Otto, born to a well-to-do family in Frankfurt, takes his family to the Netherlands to escape Hitler’s rule, but soon Hitler’s troops make their presence in the Netherlands. Otto and his family, joined by another family and friend, go into hiding. It is during this two-year period, that the 13-year-old Anne begins her now world-famous diaries, writing of their caged lives and of the growing oppression of the Jews.

Director, writer and producer Jon Blair does an excellent job reconstructing the events that helped shape Anne’s young life and tracing Anne’s last tortured year before she finally died of the typhus disease at the desolate and wind-ravaged Bergen-Belsen camp. The interviewees revealed much of Anne’s personality and inner spirit. Kenneth Branagh’s narration is flawless, adding to the strength of the documentary. There are gruesome scenes of the dead in their mass graves, descriptions of persecution, suffering, starvation, cannibalism, beatings and mass torture and death through gassing. However, the documentary also shows man’s courage and renewed hope.