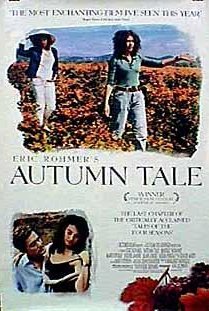 AUTUMN TALE is a slight romantic fable from French director Eric Rohmer, 79, about a forty-something married woman and a college-age woman who try to play matchmaker for their friend, a 45-year-old widow who runs a wine vineyard. There is little objectionable material in this talky movie, but it has a mild pagan worldview because the characters seem to be interested only in their personal happiness and the personal happiness of their closest friends.

AUTUMN TALE is a slight romantic fable from director Eric Rohmer, 79, one of a handful of French directors who revolutionized world cinema in the late 1950s. Rohmer’s movies are an intellectual exploration of the romantic desires of men and women. They are mostly an intricately plotted series of conversations between the characters.

In AUTUMN TALE, Marie Riviere plays Isabelle, a forty-something married woman who secretly plays matchmaker for her friend, Magali, a 45-year-old widow who has inherited a wine vineyard but who does not get along with her two older children. Without Magali’s knowledge and against her wishes, Isabelle writes a personal ad for her friend. When she finds a suitable suitor for Magali, a middle-aged salesman named Gerald, she meets with Gerald to find out if he truly would make a compatible companion for her friend.

Meanwhile, Magali has begun a close friendship with Rosine, the college-age girlfriend of her son, Leo. Rosine also tries to play matchmaker for Magali by setting her up with Rosine’s philosophy teacher, Etienne, even though Etienne prefers dating the young female students where he teaches.

Eventually, Isabelle confesses to Gerald that she’s really trying to find a suitable man for her friend. Gerald is a little flabbergasted by the switch because he was attracted to Isabelle. After seeing a photo of Magali, he agrees to attend the wedding of Isabelle’s daughter, where he will finally meet Magali. Rosine, however, has decided to bring Etienne to the wedding. The rest of the movie centers on two questions: Which man will Magali pick? And, once she picks him, will they get along?

Eric Rohmer’s movies tend to be very talky. The quality of each movie depends on how interesting the conversations among the characters are. In the case of AUTUMN TALE, the conversations are not all that interesting. In fact, it’s difficult to remember most of them 15 minutes after you leave the theater. Few of them stand out. Although there’s some tension at the wedding party that ends the movie, there’s not much that happens in terms of plot. No character really changes, and some plot lines are not resolved.

AUTUMN TALE is mostly a clean movie, however. There’s only one mild obscenity, no violence, and no sex or nudity other than a couple brief, very mild hints about staying overnight at your boyfriend, girlfriend or dating companion’s place. There is also one scene where Gerald and Isabelle share a moment of affection that flirts with adultery, but the adultery is never consummated.

Even so, AUTUMN TALE does not contain any moral point to itself. It has a mild pagan worldview because the characters seem to be interested only in their personal happiness and the personal happiness of their closest friends. Lying to Gerald is one of the means that Isabelle uses to achieve that end.