"Lots of Talking, Not Enough Going" 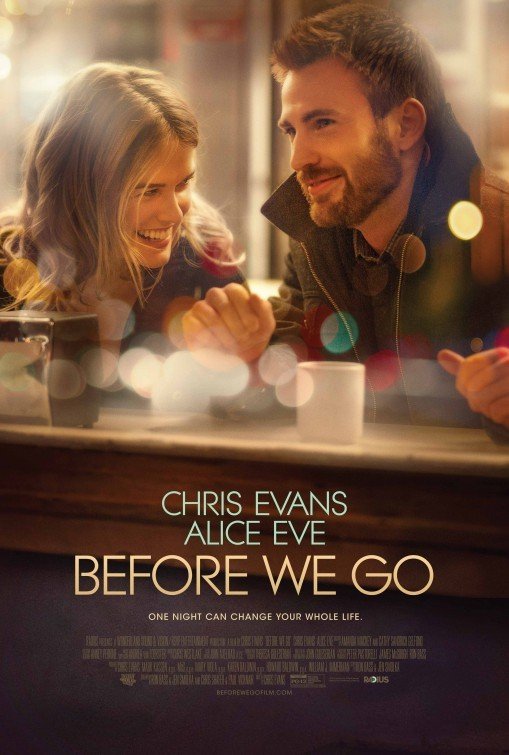 BEFORE WE GO is a slow-moving, talky romance about a musician and a married woman who accidentally meet one night in New York City. Nick is playing a trumpet at Grand Central Station for change. Brook drops her phone while running past Nick on her way to missing a train to Boston. Nick finds out Brook’s purse was stolen. He offers to help her find it. At first, Brook’s reluctant, but when some thugs threaten her, and Nick saves the day, she accepts his help. Over several hours, the two open up to each other. Nick reveals he’s lonely. Brook talks about her cheating husband.

Most of BEFORE WE GO consists of two characters talking together, with some brief foul language, so it feels like an intimate play. There are a couple entertaining moments, but the movie drags on forever. Eventually, the couple parts ways, and Brook indicates she may leave her cheating husband. At one point, the couple seeks advice from a fortune teller. BEFORE WE GO doesn’t have a lot of objectionable content, but it’s a sleep-inducing affair.

(RoRo, B, OO, LL, V, S, A, M) Strong Romantic worldview with some light moral elements, but there’s a lengthy occult scene where the two leads visit a fortune teller and solicit prophecies about their future; eight obscenities (including one “f” word) and six profanities; man gets punched in face by woman onscreen and by thugs offscreen, plus some thugs hiding in the shadows of an alley knock over a trash can and break glass bottles before looking at a woman threateningly until the male lead runs up to protect her; no depicted explicit sex, but married woman whose husband cheated on her flirts with unmarried man, and they kiss twice but nothing else happens; no nudity; characters drink alcohol socially in a couple of scenes, and female lead explains her purse was stolen while she was slightly drunk; no smoking or drugs; and, woman tells the sad story of how she learned her husband was committing adultery, and about how she feels trapped in the marriage because she’s afraid to leave and live alone, woman indicates she’s decided to leave her cheating husband, but movie ends before she does or not, fraud, attempted fraud with a stolen credit card.

BEFORE WE GO is the story of a musician and a married woman with a cheating husband meeting accidentally in New York City late one night and the adventures and conversations they share waiting for daylight and normal transit to resume. BEFORE WE GO seems to drag on forever and has a strong Romantic worldview marred by some foul language and a lengthy scene where the couple solicits predictions and advice from a fortuneteller.

The story follows Nick (Chris Evans, who also directs), a trumpeter playing at Grand Central Station for change, and Brook (Alice Eve), a woman, who drops and breaks her phone while running past him on her way to a train to Boston that she misses. Nick finds out Brook has had her purse stolen and offers to help her explore downtown NYC to find it.

At first, Brook is reluctant, but when some thugs threaten her and Nick saves the day, she agrees to accept his help. Over the next several hours, the two open up to each other about their lives. Nick reveals how sad and lonely he is. Brook starts talking about her unhappy marriage, which she’s afraid to leave despite the fact her husband has cheated on her without knowing she knows and is likely continuing to cheat on her.

Most of BEFORE WE GO consists of the two characters talking with each other, so it feels like an intimate play. There are a couple entertaining moments, especially when Nick tricks a wealthy man into giving them $500 just to perform one song at a party, but for the most part the movie is very slow and mired in low-key conversation, with brief foul language.

There’s also a visit to a psychic, who’s portrayed in a serious fashion. The fortuneteller tells Nick and Brook they are really meant for each other and should not allow their other commitments, including her marriage, get in the way of their own happiness. While they ultimately don’t follow his advice, his words are seriously considered.

BEFORE WE GO keeps things relatively chaste between the two lead characters, although they share a tempting kiss at one point and again kiss each other goodbye with deep affection. However, in the end, so little happens and so much of the conversation is hushed that the movie seems to drag on forever. So, viewers will be left wishing daylight would come so they could each go their separate ways, and the movie can end. By the end, it appears Brook may indeed leave her cheating husband, though whether she does or not isn’t shown. BEFORE WE GO doesn’t have a lot of objectionable content, but cinematically it’s a snooze.