"History of a Scoundrel" 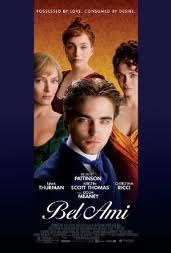 BEL AMI is based on a 19th Century French novel. Set in the late 1800s, it follows Georges Duroy (“Du-wah”), a soldier in Paris who’s financially broke after years of war. Duroy seduces three married women. None of them know about the others. Along the way, he parlays his apparent charms into winning prime writing jobs at newspapers. Even though one mistress does the actual writing for him. Duroy is fired when this deception is discovered. He gets revenge by taking a job as a gossip columnist, revealing dirty secrets about his enemies. By the end, he’s become wealthy and slept his way to a lavish wedding with a new woman.

Production values are high in BEL AMI, which features some strong performances. Too often, however, the protagonist is merely observing and reacting to the behavior of others. Also, the actor playing him is often too obvious. BEL AMI is about a corrupt, insidious man who’ll stop at almost nothing to advance his position in a corrupt society. It contains very strong lewd content. Also, the immoral protagonist never gets his well-deserved comeuppance. So, MOVIEGUIDE® finds BEL AMI unacceptable.

(RoRoRo, PCPC, APAP, L, V, SSS, NN, AAA, MMM) Very strong Romantic worldview with a protagonist who’s rewarded for a multitude of illicit behaviors with one lucky break after another, with the implied message that bad behavior is okay and pays off in life because society is corrupt, plus some politically correct content, including implied Anti-American parallels against recent U.S. foreign policy; five strong obscenities (all “f” words) and no profanities; dying man coughs up blood; very strong sexual content, with four sex scenes (two of them graphic depictions), plus multiple adulterous relationships; sex scene with upper female nudity and rear male nudity, plus shots of upper male nudity; frequent alcohol use with drunkenness in a few scenes; no smoking or drugs; and plagiarism, lying, revenge to the point of destroying other people’s lives, man becomes a gossip writer who destroys lives, hypocrisy by protagonist.

BEL AMI is an intriguing yet amoral Victorian-era drama with a strong Romantic worldview and a protagonist who’s rewarded for a multitude of illicit behaviors with one lucky break after another. The movie gives the impression that bad behavior pays off in life. It follows the story of Georges Duroy (“Du-wah”), a soldier who’s financially broke after enduring years of war, as he decides to scam his way to the top in Paris. As such, it has a sumptuous quality in its settings, costumes, and general atmosphere as well as a rich musical score. These things combine to engage the viewer on multiple levels.

Despite the high production values and several strong performances from top-notch actors, the movie suffers from an off-kilter performance by Robert Pattinson, the very popular romantic lead in the TWILIGHT movies. Pattinson has a few strong moments when he’s engaged in arguments with other characters, but too much of the time his leer is so obvious that it probably will turn off a lot of viewers, not just media-wise moviegoers. Too often, he and his character are merely observing and reacting to the behavior of those around them, rather than driving the story.

Duroy, the protagonist in BEL AMI, has almost no redeeming qualities (if any) as he attempts to seduce a trio of women who are each married and all know each other, then tries to keep it a surprise from each of them. Along the way, he parlays his seeming charms into winning prime writing jobs at Parisian newspapers, even though he allows one mistress to do the actual writing for him. Duroy gets fired after this deception is discovered. He then gets revenge by taking a job as a gossip columnist who seeks out the dirty secrets of his enemies. By the end, he’s become wealthy and slept his way to a lavish wedding with a new and beauteous bride, while still winking at his initial lover during his procession out of the church.

BEL AMI is based on the famous French writer Guy de Maupassant’s 1885 novel, which is subtitled THE HISTORY OF A SCOUNDREL, but it’s far from the genteel period movies many moviegoers see. It’s the corrupt tale of an insidious man who will stop at seemingly nothing to advance his position in life and society. While this story may have been intended as an allegory for modern times, it still leaves an unpleasant aftertaste with anyone hoping for some level of moral behavior. The movie contains very strong sexual content and the immoral protagonist never gets his well-deserved comeuppance, so MOVIEGUIDE® finds BEL AMI unacceptable.