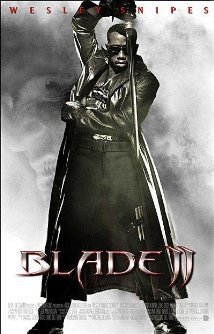 Wesley Snipes returns in BLADE II as Blade, the half-human, half-vampire character he brought to life in the first installment. He has all the strengths of vampires but none of their weaknesses. Blade’s mentor and weapon’s master, Whistler, has developed a serum that allows Blade to walk in the daylight. Their mission in life is to hunt vampires – Whistler lost his family to the vampires and found Blade when he was a youth on the street. The Vampire Nation, Blade’s eternal enemy, approaches him to help destroy a mutant strain of super vampires that actually feed on other vampires. Blade must decide whether or not to work with his old sworn enemy for the higher purpose of conquering the bigger threat.

Though the martial arts effects are captivating and there are many positive spiritual insights and moral truths portrayed, BLADE II is not worth the dark, occult, evil, violent, and obscene vehicles by which they are delivered. As Paul admonishes us in Philippians 4:8 in the New Testament, “Whatever is true, whatever is noble, whatever is right, whatever is pure, whatever is lovely, whatever is admirable – if anything is excellent or praiseworthy – think about such things.

Saint Augustine’s classic autobiography CONFESSIONS contains an excerpt about a young first century Roman Christian named Alypius who was dragged by his friends to a gladiator match at the coliseum. His comment to his friends went something like; “I will avert my eyes from such violence and rise above it. It will be as though I am not there.” Yet, within the first few moments of the game his heart was pounding as he chanted with the roaring crowd, and he was enthralled in a matter of minutes. That’s how you may feel when watching the new horror movie BLADE II.

Wesley Snipes returns as Blade, the half-human, half-vampire Marvel Comics character he brought to life in the original BLADE. He has all the strengths of vampires, but none of their weaknesses. Blade’s mentor and weapon’s master, Whistler (Kris Kristofferson), has developed a serum that allows Blade to walk in the daylight. Their mission in life is to hunt vampires – Whistler lost his family to the vampires and found Blade when he was a child on the street (he’s a father figure to Blade). When Blade last left Whistler, he believed his friend was dead, but the truth is almost worse. He has been infected with the vampire virus. Now living in Prague, Blade learns Whistler’s alive and sets out to find him.

In the process, The Vampire Nation, Blade’s eternal enemy, approaches him to help destroy a mutant strain of super vampires who actually feed on other vampires. The reapers are then turned into monstrous creatures with bald heads, gray skin and blue veins. (Remember Christopher Lloyd as Uncle Fester in THE ADDAMS FAMILY? Like that on steroids.) The reapers, as they are called, have become impervious to silver and garlic, but not sunlight (yes, it is the light that destroys them!).

Blade must decide whether or not to trust and work with his old sworn enemy for the higher purpose of conquering the biggest enemy of all. The question remains: Will he be able to push aside his old misgivings and pull from within the courage and cunning to combat the evil that would destroy the world?

BLADE II contains captivating martial arts action the likes of which I’ve never seen. Not only did Wesley Snipes punch and kick on par with the best (Jet Li, Steven Segal, etc.), but he also disintegrated his opponents with silver blades and bullets. There are many spiritual parallels and metaphors to be drawn throughout the movie, but these are overwhelmed by the movie’s occult worldview and graphic violence.

Blade trusts people and takes enormous chances. He risks his personal safety to save his friends. Blade keeps his word when the vampires don’t. When everyone is telling him to run a silver blade through his mentor and friend who has “turned,” he refuses, believing there is still hope. His love and faith pay off. He is asked to momentarily put aside his differences and ally himself with his enemy to defeat an even greater evil. The force of good, Blade himself, is not portrayed as weak but a force to be feared. Thus, a constant theme of self-sacrifice, love, honor, and duty run throughout this movie. Also, good eventually triumphs. Trust pays off. Blade gives a lot of respect to his elders and honors his enemies in a good way. The big lesson in the movie, though, which was made very clear, was, “Do not ally yourself with evil in order to defeat evil!”

Despite its captivating excitement, good story, excellent special effects, and astounding marital arts sequences, BLADE II has off-the-charts levels of violence and foul language. Most of the profanities came from the potty mouth of Kris Kristoffersen (Isn’t it fun to watch senior citizens with Jesus-length hair spitting out locker room language?). There was no implied or depicted fornication in this movie, but when going into a vampire techno dance club, the vampires were surgically dissecting each other, which seemed to give them a sort of sexual high. Try classifying that one.

The graphic levels of gore give BLADE II an extremely high wince factor. Puss like body fluid indicates that a vampire had turned mutant. There are also a lot of dissections. Thus, the deeper truths and spiritual values portrayed are not worth the dark, occult, evil, obscene vehicles by which they are delivered. As Paul admonishes us in Philippians 4:8 in the New Testament, “Whatever is true, whatever is noble, whatever is right, whatever is pure, whatever is lovely, whatever is admirable – if anything is excellent or praiseworthy – think about such things.”