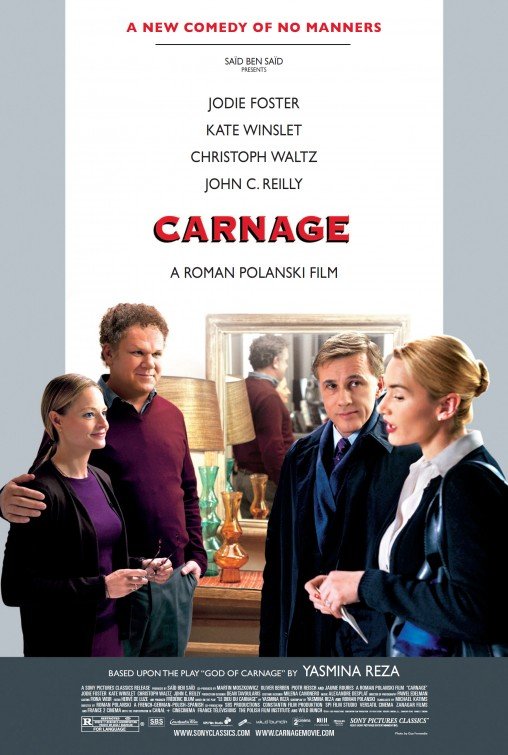 Based on an award-winning play, CARNAGE is about two upper middle-class couples in New York City who meet to discuss a fight between their sons where one boy’s front teeth were knocked out. The “victim’s” parents, Penelope and Michael, invite the “bully’s” parents, Alan and Nancy, over for coffee to work out their issues. Penelope is a writer with a social conscience. Her husband sells household goods. Alan is a lawyer who’s constantly on his cellphone. His wife is an investment broker. Although her son was injured during the altercation, Penelope tries to play liberal peacemaker. However, as the characters’ differences emerge, the polite conversation turns into verbal warfare and the thin veneer of liberal civilization erodes.

Despite some complexities, the dialogue in CARNAGE can be reduced to the theme that, no matter how well intentioned, human beings are never very far from tearing one another apart. Thus, the story speaks to the biblical principle that all of us have a sinful nature. The problem is, CARNAGE doesn’t offer any solutions. Also, a last scene seems to contradict the main message. CARNAGE has a mixed worldview with strong foul language. Extreme caution is advised.

(PaPaPa, HH, B, Ro, PCPC, Ab, AA, LLL, V, S, AA, MM) Very strong mixed, somewhat confused (especially when people get drunk and say things out of anger, some of which may seem contradictory) pagan worldview containing some pagan content, some strong humanist comments supporting moral relativism and attacking ideas of morality and civilized behavior, some moral elements, some Romantic elements, and some strong politically correct liberal elements mocking “John Wayne” masculinity but people later contradict themselves, and two anti-biblical comments include man says people don’t want to say “Hail Mary” while having sexual relations where the comment’s designed to make a point but crudely and another man says “the couple” and the family are the “worst ordeal” that God created for people; at least 56 obscenities (including some “f” words), four strong profanities, five light profanities, and woman vomits all over coffee table and books; violence includes long shot of boy hitting another boy with a stick, angry woman briefly hits her husband with her hands and fists, and woman grabs cellphone out of husband’s hand; about one reference to sex but otherwise no sexual content; no nudity but two people have to take off some clothes to clean vomit off them; people start drinking, get drunk, one woman says she wants to get stinking drunk, and drunken people say mean things and argue loudly; and, strong miscellaneous immorality such as people verbally attack one another and one another’s children with insults, man belittles his two children in front of others, woman calls other woman’s son a “wimpy faggot,” and man says he believes in “the God of Carnage” meaning that he doesn’t believe that civilization can change the brutal character of human nature.

CARNAGE is based on an award-winning play called GOD OF CARNAGE that played in Paris, London, and New York City. The movie is the Americanized version of the play that ran in New York and Los Angeles, with a new cast directed by infamous filmmaker Roman Polanski. The play is about two upper middle-class couples who meet to discuss a fight between their sons, which resulted in one son’s front teeth being knocked out.

In the movie version, as in the stage version, the parents of the “victim,” Penelope and Michael, invite the liberal parents of the “bully,” Alan and Nancy, over for coffee to work out their issues. Penelope is a writer with a social conscience while her husband sells household goods as a wholesaler. Alan is a lawyer who’s constantly on his cellphone, while his wife Nancy is an investment broker.

Although her son was injured during the altercation, Penelope tries to play liberal peacemaker and get the violent boy to apologize, but her moralistic attitude and effort to control the discussion start to annoy Alan and Nancy. Meanwhile, Alan’s frequent business calls on his cellphone start to irk Michael and Penelope. Penelope is also annoyed that Alan’s trying to help a pharmaceutical company avoid problems because a moneymaking drug may not be good.

The polite conversation turns into a verbal battle. The thin veneer of liberal civilization starts to erode and even leads to strife between the spouses themselves. Eventually, the men and women gang up on one another, then the two couples themselves are back at it again.

Despite some complexities, the dialogue in CARNAGE can be reduced to the theme that, no matter how well intentioned, human beings are never very far from tearing one another apart. Thus, the movie, and the play, speaks to the biblical principle that all of us have a sinful nature. Alan’s character makes this point several times in the movie, but in a humanist, nihilistic way.

The problem is, CARNAGE doesn’t offer any solutions to the problem of sin. Also, the dialogue sometimes supports the idea that all morality is relative. In fact, a couple times, it suggests that morality is a completely utopian idea, a fantasy (which, of course, it is if there is no God). The result is that the movie avoids making any biblical points that our sinful nature is actually the result of mankind’s broken, crippled relationship with God. In fact, a last scene implies that, though their parents have been unable to resolve anything, the two boys just might. All this sends somewhat of a mixed message.

All in all, CARNAGE contains a mixed worldview with plenty of strong foul language. Extreme caution is advised.