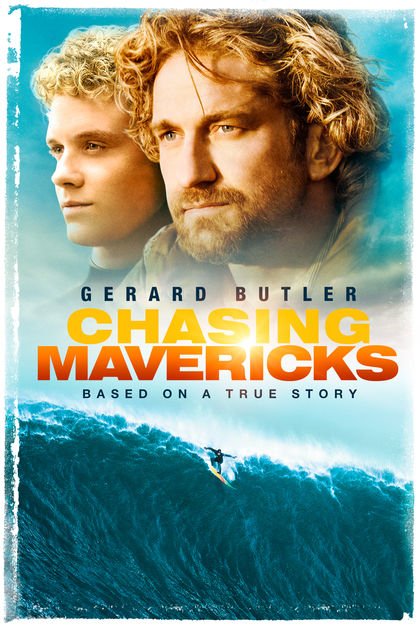 CHASING MAVERICKS opens with 8-year-old Jay rescuing a friend’s dog from some violent surf and in turn being rescued by a surfer nicknamed Frosty. Jay is so taken by a ride on Frosty’s surfboard that he devotes his life to surfing. He stows away on Frosty’s van to see Frosty and his three friends surf huge dangerous waves called mavericks. Jay becomes determined to surf the mavericks himself. Reluctantly, Frosty begins a rigorous training program to keep Jay from killing himself.

CHASING MAVERICKS contains no foul language and no lewd content, but there is some bullying, teasing and brief alcohol use. The movie has some positive messages about hard work, perseverance and looking out for others. What’s troubling, however, is that, while Jay and Frosty profess love for others, they still feel compelled to risk their lives for dangerous thrills. People give their lives in dangerous military, police and fire services, but to risk one’s life for the sake of thrills seems wasteful. At the close of CHASING MAVERICKS, a sign says “Live Like Jay.” A wiser sign would read, “Live like Jesus.”

(B, C, Ro, N, A, DD, M) Light moral worldview with examples of kindness, some rejection of immoral behavior, looking out for others, brief discussion of Heaven at a funeral, and a request for prayer is made, but some apparent Romantic aspects where characters chase potentially dangerous surfing dreams; no foul language, one scene of vomiting not related to humor; no sexual content; beach attire nudity; mother uses alcohol and son pours what he finds left down the drain; friend of main character appears to buy some drugs; and, protagonist’s father left family but another man becomes a father figure to him, some scenes of bullying and teasing, a scene of swimming in a pool that is officially closed for the evening, boy gets a girl to forge a permission letter, boy skips school to surf or observe surfing.

CHASING MAVERICKS is a well-made movie about a young man with a burning desire to surf some insanely huge waves. The movie has positive messages about hard work, perseverance and looking out for others, but the choice of what to pursue is hard for the average person to appreciate.

Based on a true story, the movie opens with 8-year-old Jay rescuing a friend’s dog from some violent surf and in turn being rescued by surfer Frosty (Gerard Butler). Jay is so taken by the ride on the surfboard that he devotes his life to surfing. He stows away on Frosty’s van for a trip to see Frosty and his three friends surf some mavericks (huge, dangerous waves created under special weather conditions in specific locations). Upon seeing the action, he becomes determined to surf the mavericks himself.

Very reluctantly, Frosty starts a rigorous training program to keep Jay from killing himself. Jay’s father left his mother, and Frosty becomes a father-like figure for Jay. To survive the waves, Frosty requires Jay to be able to paddle a surfboard for many miles at a time and to hold his breath under water for four minutes.

In a very touching scene, Jay asks his mother, “Why did Dad leave us?” She replies, “He didn’t leave you. He left me.” In reality, however, he did leave both of them. She may have been his reason, but to leave is to leave. One of the tragedies of divorce is that children’s relationships to their parents are severely damaged, regardless of the amount of visitation. Damaged parental relationships can be a factor in children doing dangerous things.

This Walden Media movie contains no foul language, some bullying and teasing, no sex, and only beachwear nudity. There is a request to, “Say a prayer for me,” but the movie doesn’t have a strong Christian message beyond the kindness Frosty shows Jay. At a funeral scene, the question is raised whether the deceased is in Heaven.

What’s hard to comprehend is how both Jay and Frosty can profess their love for others and still feel compelled to risk their lives for the thrill of an extremely dangerous sporting activity. Loved ones plead for them not to take the risk, but they still feel they must.

Jesus Christ gave his life so our sins could be forgiven. Many thousands have given their lives in military, police and fire services. Such sacrifice is noble, but to risk one’s life for the sake of thrills may not be the will of God. At the close of CHASING MAVERICKS, there’s a sign saying “Live Like Jay.” A wiser sign would read, “Live like Jesus wants you to live.”