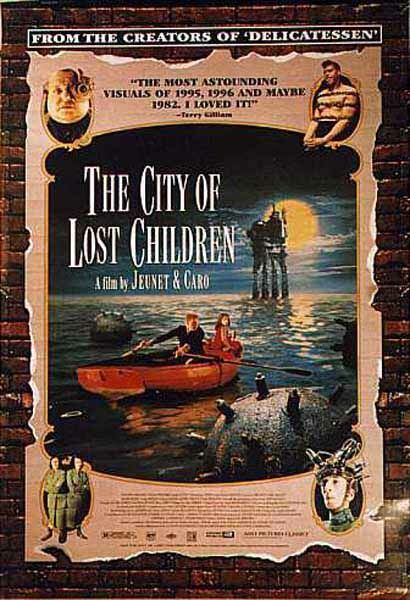 THE CITY OF LOST CHILDREN tells the story of an older loved One searching and finding his kidnapped brother in a strange, bizarre world. Completely original and visually stunning, it often shows grotesque and odd scenes making the movie inappropriate for children.

THE CITY OF LOST CHILDREN is a masterpiece in the art of film presentation, a wonderfully crafted package of mind numbing visuals. It begins by introducing us to a dark, sea-side, “Jules-Vernesque” city. Off-shore from this city on a half castle, half oil-rig lives an evil man named Krank. Krank tragically is unable to dream and so sends his ugly Cyclops henchmen into the city to kidnap children so that Krank can feed off of their dreams. One of the kidnapped children is a cute little boy named Denree who’s adopted brother is a muscle bound red-head named One, who sets out to recover Denree. In the course of the story, One befriends a little orphan girl named. Together, they search about the city trying to rescue Denree from Krank.

THE CITY OF LOST CHILDREN retells an age-old story in a very unique and creative way: a child in distress gets rescued by the One who loves him. The film boasts incredible visuals unrivaled except for those created by the likes of Terry Gilliam. It is a dark film with some disturbing elements and odd images. Not only does the villain feed off the dreams of children, he kidnaps them too. We also see floating brains, strange creatures and bizarre sequences. Drug use and drunkenness are often featured. A visual-treat, THE CITY OF LOST CHILDREN is only for mature audiences.