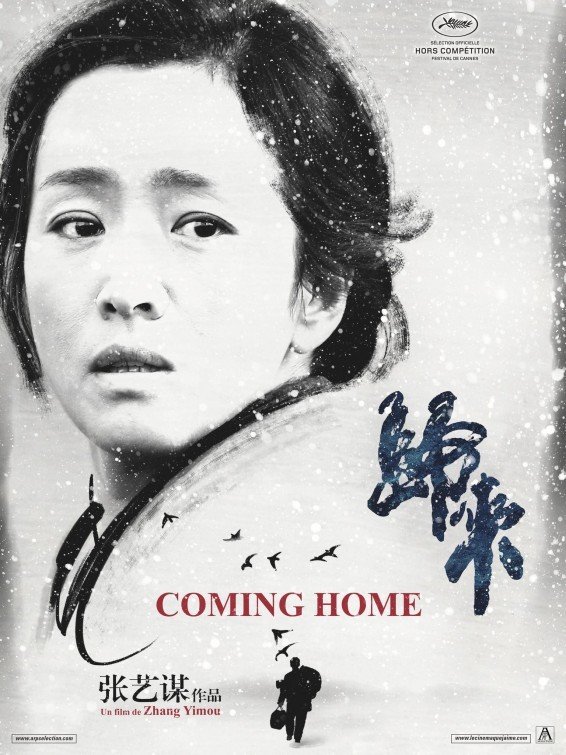 COMING HOME is a Chinese movie about a man who returns home from a labor camp in rural China after Mao Tse-tung’s Cultural Revolution during the Mid 20th Century, only to find that his beloved wife has lost her memory of him. Lu Yanshi tries to approach his wife several times, but she always panics and thinks he’s a party official who tried to woo her when he was gone and may have even raped her. So, Lu approaches her as a friendly neighbor living nearby. To get closer to her, he convinces her to let him read the letters he wrote to her in the camp but could not send.

COMING HOME has an anti-communist political subtext, but it’s also about enduring love for a spouse and enduring parental love for a child. That said, there is no God and no Jesus. So, ultimately, it’s a sad and tragic view of life where victory over the chaos that evil brings is extremely difficult, if not impossible. A Christian worldview could have made COMING HOME more captivating, inspiring and even more meaningful.

(B, ACAC, C, Co, Fe, V, S, D, M) Light moral worldview with an implied but strong anti-communist message that’s buried a little bit and somewhat allegorical or symbolic, plus some redemptive forgiveness and reconciliation between parents and daughter, but no reference to God, Jesus or religion, and people defer to Communist Party officials and there’s a public, slightly radical feminist dance honoring communist women soldiers; no foul language; light violence such as woman falls and hits head (with bloody wound) on wooden bridge bottom, man grabbed and arrested, woman with memory loss panics and shoves husband away two or three times because she thinks he’s man who probably assaulted her when he was in a labor camp, and dance shows people onstage thrusting rifles; no depicted sex but it’s implied woman was assaulted and maybe even raped in the past by a Communist Party official when her husband was away; no nudity; no alcohol; smoking but no drugs; and, man must deceive wife about his identity so he can see her and daughter is angry at her parents for the political trouble her father caused with communist officials, who sent him to a labor camp during the Cultural Revolution in Red China, so she betrays them to the officials when her father escapes for a brief time and secretly comes home.

COMING HOME is a Chinese movie about a man who returns home from a labor camp in rural China after Mao Tse-dung’s Cultural Revolution (1966-1976), only to find that his beloved wife has lost her memory of him. Like many of acclaimed director Zhang Yimou’s movies, COMING HOME is a tragic tale of two lovers. It shies away from overt criticism of communist control of China but offers a poignant parable of implied criticism that has implications beyond the merely political and historical.

The movie opens with Lu Yanshi having escaped the labor camp. He tries to see his wife, Wanyu, but is thwarted by their daughter and the police looking for him. However, he gets a message to Wanyu, asking her to meet him the next morning at the train station.

The next morning comes, and Wanyu goes looking for her husband. She’s being followed by the police, however. Walking on the bridge above the station, Wanyu sees her husband below, but other policemen are trying to grab him. The policemen following Wanyu stop her from running to her husband below. She falls and hurts her head badly, and Lu is taken away, to be sent back to the labor camp.

Several years pass. The Cultural Revolution is finally over, and Lu is able to return home officially. However, when he gets home again, he finds that, because of her head injury, his wife has lost all her memories about him, especially what he looks like. Lu tries to approach her as himself, but every time he does so, she thinks he’s a mean Communist Party named Fang and tries to get away from him. Lu finds, however, that, if he approaches her as someone else, as someone who lives nearby, she’s able to talk with him about other things except their marriage and former life together.

It turns out that Lu’s wife does have a letter from him, saying that he’s being released from the labor camp and will return to her by train on the fifth. He didn’t specify what month, however, so every month on the fifth, she goes to the train station to meet her husband. Lu tries to make it appear that he’s getting off the large platform that takes people from the train to the street level, but his wife never recognizes him.

Eventually, Lu arranges to deliver all the letters he wrote to her in the labor camp but couldn’t send (note: apparently, Lu only was allowed to send the one letter when he was finally released). Posing as his wife’s neighbor, Lu offers to read the letters to her, and she agrees. So begins a years-long friendship, but whenever he tries again to pose as her husband, she still panics, thinking he’s the party official who tried to woo her when her husband was taken away. So, the couple remains apart while Wanyu waits diligently for her beloved husband to return.

It becomes implicitly clear in COMING HOME that it’s the Communist Party’s tyranny, in the form of the policemen and the party official who may have raped the hero’s wife, that’s led to the tragedy involving Lu and Wanyu. It has even driven a wedge between them and their daughter, who’s found her career hopes as a dancer dashed because of her father’s imprisonment. The daughter resents the love her mother still feels for her husband and accuses her of loving him more than her. The good news, however, is that, as the daughter sees the devotion her father feels toward her mother and herself, her heart melts and she tries to help her father get back together with her mother. Also, her father urges her to reconcile with her mother.

Complete happiness, however, always seems elusive in a Zhang Yimou movie (HERO, RAISE THE RED LANTERN, HOUSE OF FLYING DAGGERS). So [SPOILER ALERT], the last shot shows an elderly Lu having to be content with merely taking his wife to the train station platform to meet himself on the fifth of every month, a futile hope that will never be realized.

As noted above, COMING HOME has an anti-communist political subtext, but it’s also about enduring love for a spouse and enduring parental love for a child. So, the movie has themes that go beyond just a political and historical context. That said, there is no God and no Jesus in COMING HOME. So, ultimately, it has a sad and tragic view of life where victory over the chaos that evil brings is extremely difficult, if not impossible. This fits in with Zhang Yimou’s other movies, but a Christian worldview could have made COMING HOME more captivating, powerful, inspiring, uplifting, and even more meaningful.

About 1.5 million people were killed during the Cultural Revolution that the leftist, atheist, communist, socialist tyrant Mao (along with his evil wife) created. By the way, he also killed about 68 to 73 million more people during his reign from 1949 until his death in 1976, including about 34 million people who died by famine because of Mao and his radical leftist buddies. Of course, these numbers don’t include all the millions of people Mao enslaved, oppressed and imprisoned politically, spiritually, emotionally, intellectually, and physically. COMING HOME alludes to the latter, but it could be much stronger. Of course, the Communist Party still rules China, so who knows what Zhang Yimou would film if this were not the case.