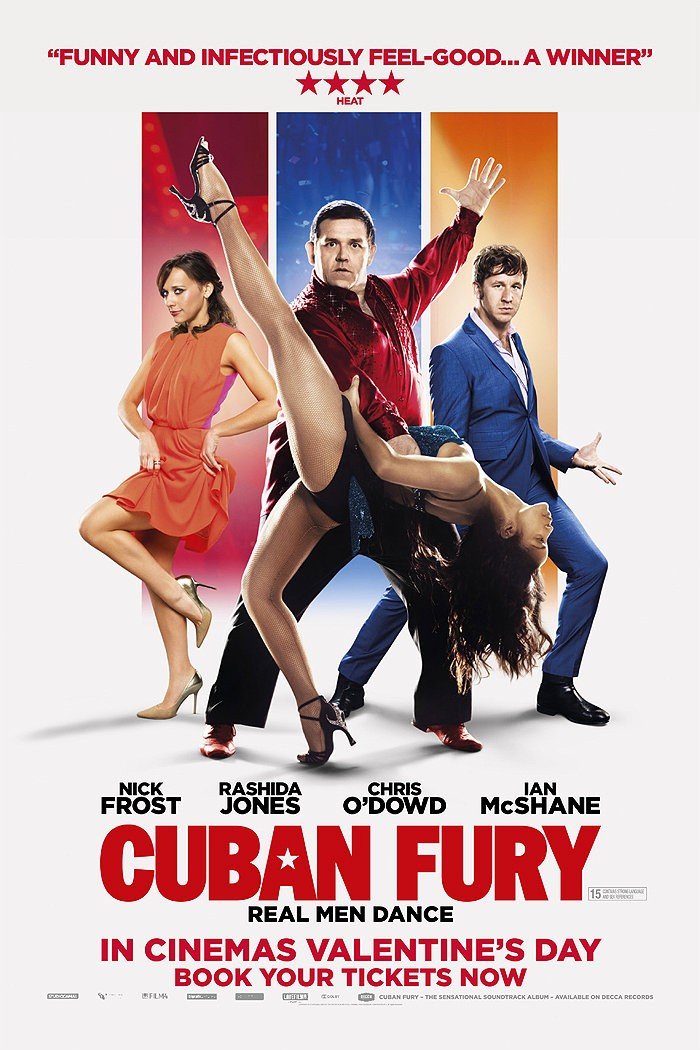 CUBAN FURY is a funny romantic comedy from England. It tells the story of white collar worker Bruce Garret. At 13, Bruce was on the verge of winning the junior salsa dancing championship when a group of bullies shamed Bruce into stopping salsa dancing entirely. Years later, Bruce has become a chubby, though smart and funny, office worker. As such, Bruce has no self-confidence whatsoever outside the boardroom. However, when he learns that his beautiful American boss loves salsa dancing, Bruce tries to recover his salsa magic and win the girl from his annoying office rival.

CUBAN FURY has a perfect romantic comedy plot. The story structure is excellent. A completely engaging and dance-worthy performance by Nick Frost as the sadsack hero completes the picture. As a result, CUBAN FURY delivers a funny, touching and inspiring story, with some very entertaining dancing scenes. Sadly, CUBAN FURY puts a damper on everything by including plenty of gratuitous foul language. Because of the foul language, some brief lewd jokes, and a homosexual character, CUBAN FURY warrants extreme caution, especially for media-wise viewers and their families.

(RoRo, B, Ho, LLL, V, S, N, AA, M) Strong Romantic worldview where an overweight man, traumatized by bullies as a youth, goes after the girl of his dreams, with some moral elements, including a subplot of stopping the villainous, deceitful, annoying rival from seducing the girl, plus some homosexual content and innuendo when, during his journey, hero gets a new friend who’s a crazy, effeminate homosexual; at least 63 obscenities (including many “f” and “s” words), one strong profanity, 17 light profanities, and several obscene gestures; light comic violence includes some hitting and kicking during two aggressive salsa dances, a couple punches are thrown, and, after getting punched, a friend angrily but comically uses golf club to drive golf balls into the hero on a driving range; some crude sexual references and innuendoes include a homosexual supporting character, hero’s rival makes lewd inappropriate references, talk about fornication and seduction, rival inappropriately touches hero to tease and annoy him, brief suggestive dancing, and rival takes off pants behind woman to make hero leave when hero knocks on her door, but, after hero leaves, woman kicks rival out of her apartment when she discovers his deceit and when he keeps making obnoxious comments suggesting they should sleep together; partial upper male nudity; alcohol use and hero drinks too much with his sister after she encourages him to go for the girl of his dreams and drunkenly assembles a mixtape for the woman at his home as a romantic gesture; no smoking or drugs; and, lying, deceit, homosexual friend convinces hero to shave off his chest hair, and rival passes off mixtape hero made for their romantic object of affection as his own.

CUBAN FURY is a funny romantic comedy from England about a chubby jellyfish, who used to win trophies in his childhood as a young salsa dancer but needs to regain his confidence to woo the girl of his dreams. Sadly, the filmmakers decided to put a lot of “f” bombs and other lewd language in their movie, which, otherwise, is a sweet, funny, and touching story that could have reached a wider audience.

The movie opens with an overweight man named Bruce Garrett telling how his budding salsa career ended in 1987 when he was only 13. On his way to the UK Junior Salsa Championship with his sister, some young bullies attack Bruce and humiliate him, and he tells his coach that salsa is for sissies. As a result, Bruce loses confidence in himself and begins to put on weight.

Twenty-two years later, Bruce is an unloved, white collar worker, trapped in a downward spiral of self-pity, regret, and defeatism. Only his pretty and smart (and thin) new American boss, Julia, gives him reason to live. However, she’s out of his league, even though she clearly enjoys his sense of humor.

When Bruce discovers Julia has a passion for salsa dancing, he decides the only way he can get the girl, and defeat his rival, Dean, is by going back to his salsa coach and re-discover his salsa passion. Will Bruce be able to regain his confidence and recapture his salsa magic? How can Bruce stop his rival from taking advantage of his lack of confidence and woo Julia away from him forever?

CUBAN FURY has a perfect romantic comedy plot. The story structure is on target. A completely engaging and dance-worthy performance by Nick Frost as the sadsack hero completes the picture, as does his talented supporting cast led by Rashida Jones as Julia, the object of the hero’s affection. Viewers will really want to root for Bruce to get the girl. Chris O’Dowd and Ian McShane are hilarious as the annoying, conceited rival and the grumpy, passionate coach, as is Kayvan Novak as a crazy homosexual salsa dancer from Eastern Europe who befriends Bruce. As a result, the movie delivers a funny, touching, and inspiring story, with some very entertaining dancing scenes.

All that said, CUBAN FURY puts a damper on everything by including plenty gratuitous R-rated foul language. This movie could have been rated PG-13, or even PG, and attracted a much wider audience. In fact, according to The Numbers website, PG-rated movies have averaged two and one-half times more money at the American box office than R-rated movies since 1995, $31.59 million per movie versus only $12.40 million per movie (http://www.the-numbers.com/market/mpaa-ratings). Also, MOVIEGUIDE®’s own statistics over the years show that R-rated movies are much less likely to make it into the Top 10 or Top 25 Movies Overseas and on Home Video.

Because of all the foul language, some lewd jokes and references, and a homosexual character, CUBAN FURY warrants extreme caution, especially for media-wise viewers and their families.